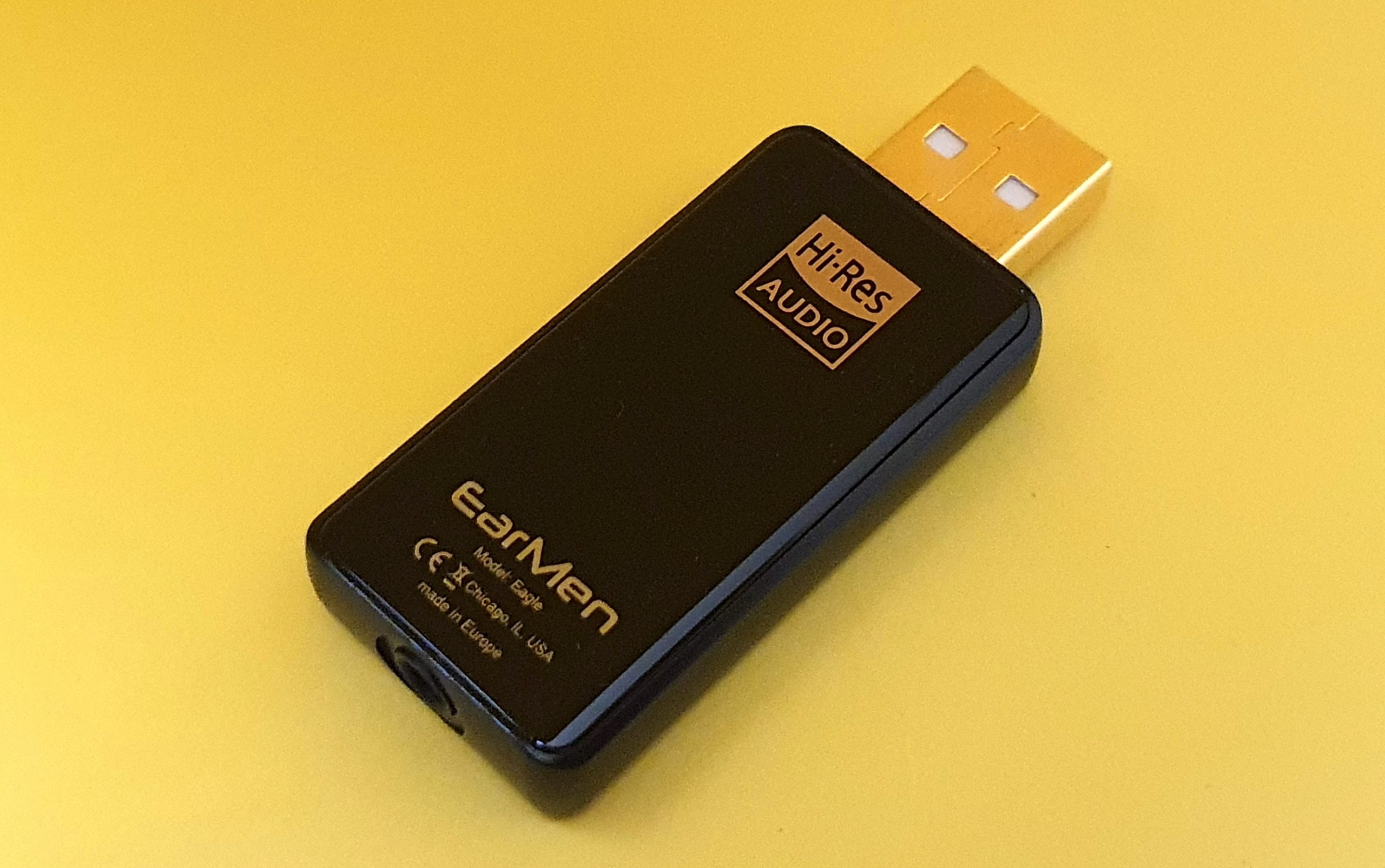 + Small form factor, with great build and looks; just about powerful enough to drive full-sized cans; plug-and-play compatibility with all mobile devices/PCs/Macs; not stated in the manual/website, but is presumably MQA-enabled.
– Only USB A and C connections provided, micro USB and Apple Lightning users on their own.
Sound: 8/10
Value: 9/10

GIVEN the multimedia functionality handphones and similar portable digital devices have today, it is inevitable that most people have adopted these as their default audio player on the go. And with the ubiquity of Bluetooth connectivity today, there isn’t even a need to be tethered to the device anymore.

Not for audio purists, though, who still insist on a wired connection – and for good reason, too! Audio quality is not the manufacturer’s priority in such everyday devices. Adequate, not exceptional, is what you can expect to get.

The answer to better audio from portables lies in an external device like the EarMen Audio Eagle USB DAC/preamp/headamp, from Serbian outfit Auris Audio. Its small form factor means it hardly takes up any space when in the same pocket as the source device, and the audiophile-oriented DAC/amp design ensures sonics are always up to mark.

The concept is not new, of course, and there are various makes and models in the market for the discerning canhead. The question is if this product from a little-known manufacturer can swoop down and knock more established marques off their perch?

In terms of looks and build, the made-in-Europe Eagle hits the mark. Measuring 8 x 22 x 55mm (h/w/d) and weighing a mere 15g, the device is smartly dressed in black and is glass-encased. Absolutely no complaints here as it feels solid and smooth to the touch. It proudly wears a gold “Hi-Res Audio” badge on the back and a LED-backlit Earmen logo on the front, which lights up green during playback. That said, the Eagle is compatible with up to DSD 128 and PCM 384kHz resolutions.

Providing the Eagle’s “lift” is an ESS Sabre ES9281 DAC chip, subsequently mounted on what EarMen says is a four-layer gold-plated PCB, which it says optimises performance and sound quality. Power output is rated at 1V/62mW at 16 ohms, 1.4V/62mW at 32 ohms and 2V/27m at 150 ohms.

SETTING UP
There’s nothing involved here except to plug the device into a USB port and press play.

The Eagle is equipped with a USB A plug, but a short USB C connector cable is packaged with it. Micro USB users are out of luck here, but such OTG connectors are cheap and easily available. It works with iOS devices too, but the caveat is that it necessitates the use of Apple’s camera connection kit dongle – a separate purchase, naturally, as are most things related to the company.

The Eagle also had no issues playing back hi-res files from devices’ on-board storage using third party apps – there are free apps on both Android and iOS that work well.

A pleasant surprise, however, was when I plugged the Eagle into the PC while using the Tidal app – a pop-up notice appeared which read I had connected an MQA-enabled device and the EarMen logo turned purple on playback! This wasn’t stated anywhere in the manual or the website, but an Internet search revealed that the ES9281 DAC chip is indeed capable of rendering MQA files. It appeared to work with iOS devices too, as the EarMen logo also turned purple. Of course, I cannot confirm this is MQA rendering at work here and can only presume that’s what the change in LED colour indicates.

For Android users, however, MQA playback is app-dependent. I admittedly do not understand the issue completely, but it basically depends on the app’s ability to “wrest control” of the USB output from the operating system and send a bit-perfect data stream through. The Tidal app itself from the Google Play Store cannot do this, and only a third-party one (USB Audio Player PRO, which Tidal recommends) is able to.

LISTENING
Once the Eagle gets going, though, it soars. Volume levels are more than adequate for in-ear ‘phones and it can even drive full-sized headphones. There is just enough juice to drive more difficult loads cleanly at moderate levels, but don’t overdo it or it will begin to sound strident.

To state the obvious, the Eagle is never going to outperform a full-sized component. It will, however, better the output from mobile devices or on-board soundcards from notebooks and the like, which is its ultimate goal.
It’s fairly transparent, gives decent dynamics and even resolves a fair amount of detail, within its limitations.

There may be a slight emphasis on the highs but not overly done, some heft in the bass when needed and well-defined defines mids, too! What’s appealing about the Eagle is what it doesn’t do, which is to overly emphasise or exaggerate any aspects of the music – neutrality is the key word here.

THE LAST WORD
There really isn’t anything much to criticise. The thumb-sized Eagle is an excellent device that will enhance the playback quality of the music with any portable device, and more than likely does MQA too!

For its asking price, which is less than those from bigger and more familiar brands, it’s hard to put your foot wrong here. Recommended.