Spatial Audio M3 Turbo S speakers – out of the box 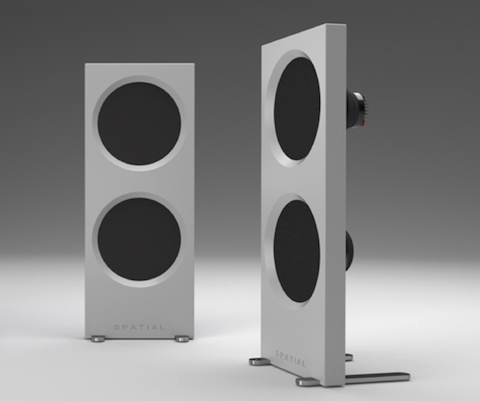 + Powerful lows, excellent slam, and loads of detail and verve for the money; slim footprint means it doesn’t get in the way; punches well above its weight; has a cohesive presentation that is musically pleasing.
– A high-quality low-wattage amp preferred to best explore its attributes; staging a matter of taste.

IF these weren’t loudspeakers, they’d probably fare well as art deco pieces, placed carefully at certain spots in the living room for viewers to appreciate their full effect when perceived from certain angles. It is only when you walk around to the rear of these panels that you see the industrial metal baskets – painted black – that house the heart of these loudspeakers.

The Spatial Audio Hologram M3 open-baffle speakers are the second-generation models from the company founded by one Clayton Shaw, who was the man behind Emerald Physics, his first venture into box-free designs. The earlier M1 and M2 had more elaborately and expensively finished baffles, but apparently, that wasn’t doing too much for the sound, and when better drivers came along, Shaw opted for a simpler baffle design and finish to keep the price sane.

The M3 reviewed here is the Turbo S version, which sports the newer M25 compression driver that has a titanium diaphragm; it also uses film and coil capacitors. The speaker is described as a two-way, point source, open-baffle, dynamic driver type with controlled directivity. 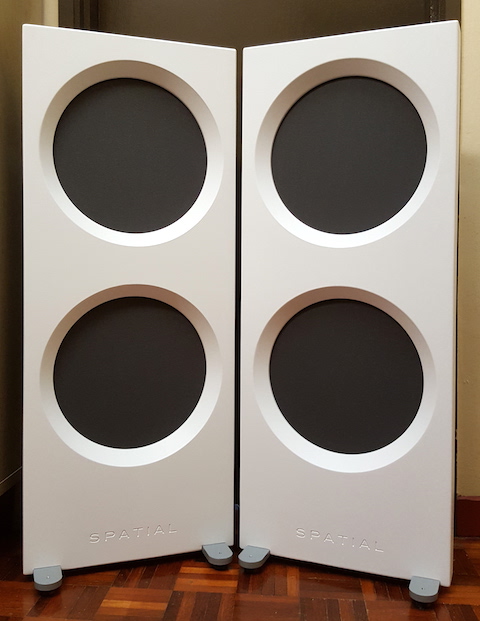 The chassis (baffle) is made from two layers of high-density fibreboard, and the drivers are both 15-inch, crossing over at 800Hz with passive “Hologram Network Technology”. Frequency response is given as 32Hz to 20kHz, sensitivity at 94dB, and impedance at four ohms nominal (three ohms minimum). WBT terminals are part of the package. Spatial recommends amps of 10 watts and more – and this, I will address later in the review.

The dimension are 42 x 17 x 3 inches (h/w/d) and each unit weighs 65lbs. The speakers are engineered and manufactured in the USA.

Spatial provides a 20-year limited warranty and US residents can ask for a 60-day trial period before whipping out their cheque books. The baffle comes in options of black, red and white satin, and lead times for new orders are about three weeks.

The basic M3 is US$2,195 a pair – add US$600 for the Turbo S version featured here. What Spatial has done to keep the price lower than its first models is simplify the structure and finish of the baffle – in this design, there is little impact on the sound since the drivers don’t have an enclosure throttling them.

SETTING UP
Each unit comes with a pair of mounting brackets to be screwed to the bottom of the baffle. That done, you’ll need to experiment to find out how much toe-in is required for your sweet spot… I also experimented with tilting them back slightly by  inserting extra metal supports underneath the front feet.

Apparently, it takes about 200-plus hours to run these speakers straight out of the box, but fortunately, the pair I took in for review already had some miles under the belt. Still, despite being impressed on the whole, a couple of elements bothered me… this lasted for a few weeks, until the pair was properly run-in.

One more thing – these speakers are pretty easy to drive, but I’ve always believed that many amps deliver their best when driven reasonably hard. With the solid-state amps I used, ranging in power from 70 watts to 300 watts, the amps barely had to breath before the M3 Turbo S went too loud for my tastes. So ideally, you would want a low-powered tube amp for maximum synergy or a pure Class A solid-stater with modest power output.

It was only later in the reviewing stage that I managed to procure an SET integrated amp, a classic Cary Audio CAD-300 SEI, for use with the M3 Turbo S… and I believe this allowed the full potential of the speakers to be better exploited. 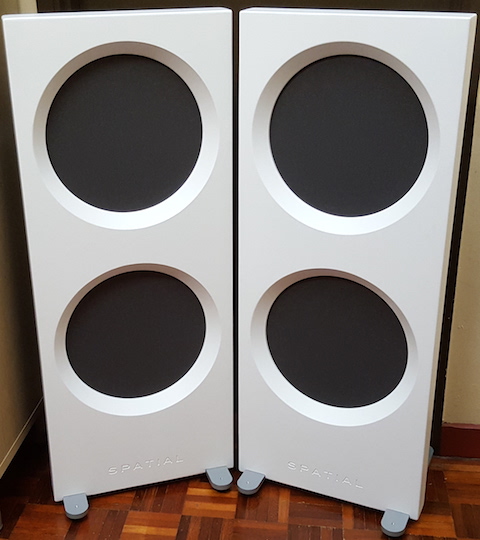 LISTENING
I was initially looking at the smaller M4, but the distributor insisted on the M3 Turbo S because “you’re a rock music fan, you’ll love its slam.” Well, he was right… first impressions were of deeper bass than I’m used to in my room and the urgency in presentation. The Spatial gulped down all the rock material I threw at without batting an eyelid. Of course, it hadn’t been fully run in, and what did bother me was a smidgeon of hardness in the midrange, which I was told would even out once the speaker passed its run-in period of 200 hours. But through this time, the tight and deep bass and crisp presentation kept me interested.

I let the speakers run in with the Rega Elex-R for a few weeks, and at some point, things began falling in place with better cohesion. What did frustrate me was that I was unable to drive the speakers hard with the solid-state amp… things just got too loud. Still, played at a volume that didn’t require much effort from the amp, what I heard was impressive enough – apart from the lows and pace, the mid and high frequencies were clean and unrestrained, allowing a great amount of detail from the recordings to surface.

Some may find the vertical staging a bit lower than they’re used to, but this can be mostly remedied by angling the panels upwards – just place some footers under the front two feet of the speaker. Of course, staging is also dependent on the height you’re seated and the room… but contrary to complains from a friend who owned the earlier M1 model that his staging was almost below the knees, I found it required no major paradigm shift to get used to the manner in which the M3 Turbo S speakers presented the music… and yes, I did tilt the panels.

I had to be, for most part, content with driving the speakers with mid and high-powered amplification, and most of the time, it seems as though the M3 Turbo S wasn’t really working its butt off to communicate… from the punchy and low bass to the crystal clear tops and mids, the speakers cruised along happily with all sorts of music, but relishing the challenge of recordings with loads of deep bass and dynamics. 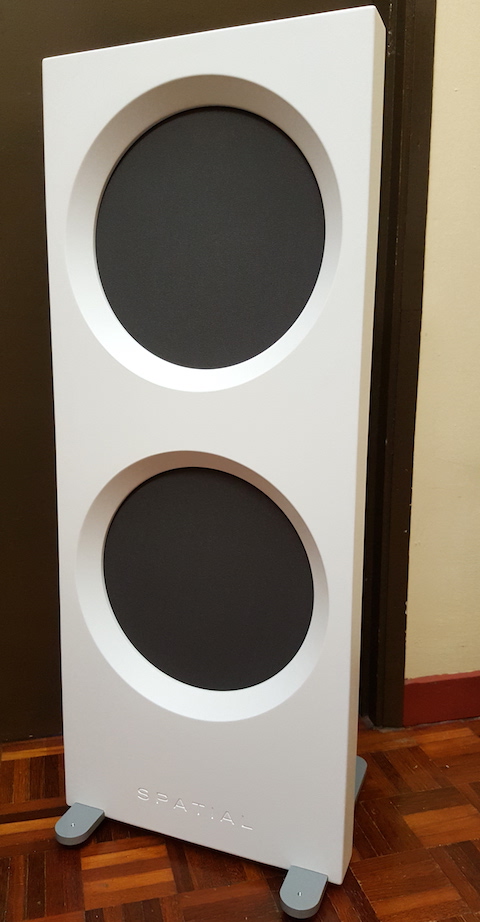 Then, more recently, the Cary tube amp (with its upgraded power tubes) came into my possession. I connected it to the speakers and source… and powered up the system. If I was already smiling at the capabilities of the M3 Turbo S earlier, this time it became a wide and delighted grin. Now the system really soared… the 11-watt amp had no trouble driving the M3, and I could push the amp harder, too.

When I played a CD of Bela Fleck and the Flecktones’ Three Flew Over The Cuckoo’s Nest, which has some powerful lows from the bass and drums, the speakers produced the music with aplomb, no holds barred… at no time did they seem even slightly fazed. Through this, various elements of the music were reproduced with precision, so there was no confused mess at bottom as you would get from some box designs.

Lest I seem too absorbed with the bass… let me assure you that these speakers were no slouches in other areas. Whether revealing vocal nuances or instrumental timbres or showing an ability to stop on a coin when the occasion required, the M3 Turbo S units were extremely communicative.

I was impressed with how clean the treble sounded even with the tube amp – there was never a sense of a languid presentation… the speakers sounded right there, and bristling with a visceral energy when the music called for it. Even with softer jazz and folk tunes, the speakers were able to deliver a sense of almost being there in the recording environment, as heard on Patricia Barber’s Cafe Blue CD. My resident Raidho speakers are more intimate and better at detail, but they cost much more. The Spatials sounded more cheerful and into the moment of things, even if occasionally, there was a tendency to highlight sibilance.

I finally ended up keeping the Cary amp permanently hooked up to the M3 Turbo S… seemed to me like the best match of all the amplification I managed to get my hands on. I noted that there was nary a suggestion of bass being soft with the tube amp… the amp delivered and the speakers relished dishing out what was demanded by the rest of the chain. 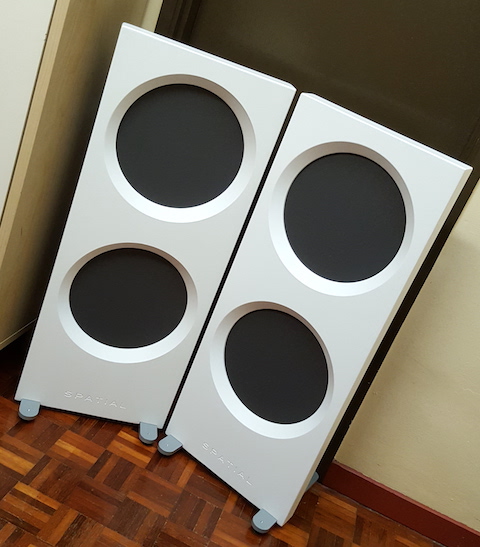 THE LAST WORD
If I had any misgivings about cabinet-free speakers in the early part of my reviewing gig three decades ago, Magneplanar and Apogee speakers banished them. But they used ribbons, while the Spatial Audio M3 Turbo S has conventional drivers. The lack of an enclosure, I had felt earlier, might compromise the bass, but this was not the case… one only has to worry about the narrower dispersion and getting the sweet spot right based on this.

The other caveat is the amp – low wattage ones are recommended although there wasn’t any harm done with the 300-watt Vitus. But with the tube amp, these speakers drew me even closer to the music. If you’ve not heard this or the M4 yet, try a pair… in fact, there’s even a newer premium version of the M3, but that comes with a 30-40% price hike. Highly recommended – high-end sound without the associated price tag. Having no cabinet works, and outstandingly so!