To the power of… the Kii THREE 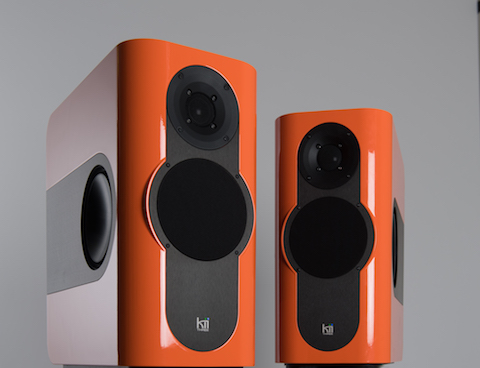 + Aesthetically pleasing compact, little monster of a loudspeaker. Sounds even more gorgeous than it looks, and offers room placement options that leave others in tears. Compressed files sound quite listenable. Enables de-cluttering of one’s listening space. Obviates need for madcap-priced speaker cabling.
– While it sounds compelling, one may long, after a while, for a more direct, “unprocessed” sound. You need to have each speaker near enough to a power outlet. Direct digital and analogue connection via XLR connectors only, Kii Control or other suitable interface unit separately required for increased connectivity options. Lack of wireless connection may be an issue for some. Not highly-affordable, and the Kii Control has to be purchased separately.

I FIRST laid eyes on an actual pair of Kii THREEs at the recent KL International AV Show 2017. Looking rather less avant-garde, and thus perhaps will be less challenged in gaining acceptance from one’s better half than, say, the somewhat similar-minded Devialet Phantom (recently reviewed here), the Kii THREEs were one of several pairs of active loudspeakers which impressed at the show.

I was moved enough to ask the editor if we could get them for a test drive. Requisite calls were made, the local dealers obliged, and the pair that had been at the show soon ended up in my abode.

The Kiis are described by their manufacturer as “high end active speakers for hi-fi and professional use”. It is rare indeed for a product which is perceived to have domestic “lifestyle” aspirations, given its looks, to also be targeted at the professional market, but the principals who started up Kii Audio GmbH have extensive experience in both.

The company is German-based but the corporate team hails from all over Europe. The most recognisable name is Belgian ex-Philips engineer Bruno Putzeys, the chief technology officer whose fame has so far had more to do with developments in switching, or Class D, amplifiers. And guess which type of amplifier modules are used in the Kii THREEs?

What makes the THREE different from most other active monitors is its use of digital signal processing in place of a standard hardware-based crossover, together with multiple separately-amped drivers (front, side and rear) which collectively seek to control the dispersion pattern of the sound (using phase cancellation) emanating from the loudspeaker. This allows a more accurate perception of the music by the listener, preserving imaging and coherence at the listening position taking into account the placement of the loudspeaker enclosures in relation to the room boundaries. A fair amount of user adjustability is provided so as to allow optimisation in disparate listening environments. 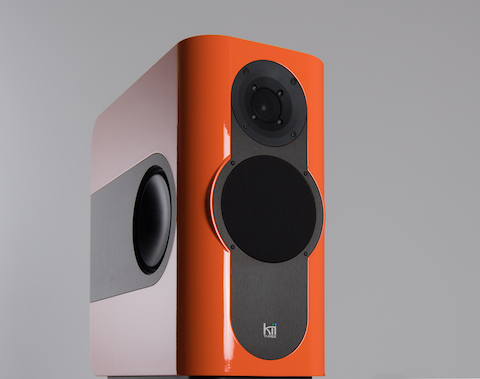 SETTING UP
I recommend that if you set them up yourself, have a friend available to assist with the unboxing. As there are exposed drivers on the sides, right just about where one would normally apply sideways pressure to grip a cabinet of this size and weight, the habits formed when extracting more conventional units from their carton could see you come to grief even before you’ve heard the first note from your new purchase.

The THREEs are oblong-shaped with dimensions of 40 x 20 x 40cm (h/w/d) and weighing a solid 17kg or thereabouts each. Seeing that each has six drivers overall and as many power amps built in, as well as AD/DA and DSP capability, I’d think a featherweight enclosure would have caused some sense of alarm to a buyer as to what he had just put his money down for.

Also classy-looking is the optional Kii Control unit (reminiscent of the Devialet D-Premier’s remote control), but which is somewhat let down by the need to have wires dangling out from it. I would consider the Kii Control to be essential for the domestic user, as direct connection to the speakers necessarily require XLR male connectors to be used.

The inputs at the Kii’s rear lower portions accept analogue or digital signals (AES/EBU) depending on user selection. As connections via the Kii Control use the proprietary Kii Link method (using provided cables with standard RJ45 connectors, but not being compatible with taking in data from sources other than the Kii Control), one feels more like a computer tech-support guy than hi-fi user in the set-up process.

I was unable to hook up a turntable source via a conventional preamp as I was not able to get the proper connectors or adapters in time (exacerbated by the fact my regular preamp uses DIN connections). The review period was rather shorter than would otherwise have been the norm, but it was perfectly understandable as these were probably the only pair the local dealers had on them, and they could not accommodate the usual longer tenures.

So, listening was with all digital sources then, where I used the Kii Control’s USB (MacBook Air-iTunes and Lenovo laptop-Windows 7-Foobar 2000), Toslink (DVD player acting as CD transport), and coaxial inputs (a QLS-550 WAV File player reading off SD Card), with the Kii Control acting as “digital preamp” at all times. Redbook standard, 24/96 PCM, and compressed 320 kbps MP3 and 192 kbps AAC materials were used. I “cheated” by using a fair share of ripped vinyl files, though.

The Kiis run surprisingly warm to the touch when played over longer and louder sessions. It’s no Musical Fidelity A1-wannabe, but don’t go letting your spouse put any decorating cloths or other objects atop them to be on the safe side. 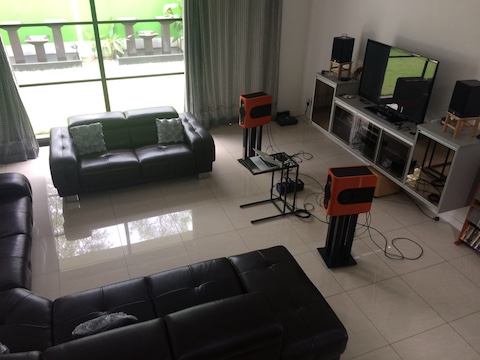 LISTENING
Listening was done in two settings, one in a back-to-wall position in a rather less than ideal cramped room, which also has an upright piano, and in free space in an expansive but, again, decidedly-unfriendly acoustic environment.

Listening in the first setting began after tryouts of some of the contour and boundary pre-sets and options, chosen appropriately for the spot where the speakers ended up. Some amount of speaker re-positioning still initially had to be done for best in-condition results, but once happy, and the speakers having warmed up for about an hour, the THREEs gave the best results I have yet had in this particular room, and by quite some margin at that.

Clarity and coherence, as well as perception of depth and height of the soundfield, and placement of images within were just superb. With the chosen setting from the Kii Control, I was getting bass of quality and quantity and a sonic presentation that, with eyes shut, one could imagine coming only from significantly larger loudspeakers. Treble had ample air and extension, and the all-important midrange had a high degree of believability and palpability. Most of all, the flow of the music was not impaired or impeded in any given degree that detracted from enjoyability.

I had previously only been able to have some success using ATC SCM11s in this room and positioning, but the THREEs managed to make SCM11s sound small and insubstantial, which is no mean feat as the ATCs are very good loudspeakers overall. I’ve had issues with integrating a subwoofer with the ATCs in this room but if I ever attempt to do so again, it is because the THREEs have really opened my ears to what is potentially achievable. I doubt I’d get the same level of coherence and integration the THREEs displayed, though. 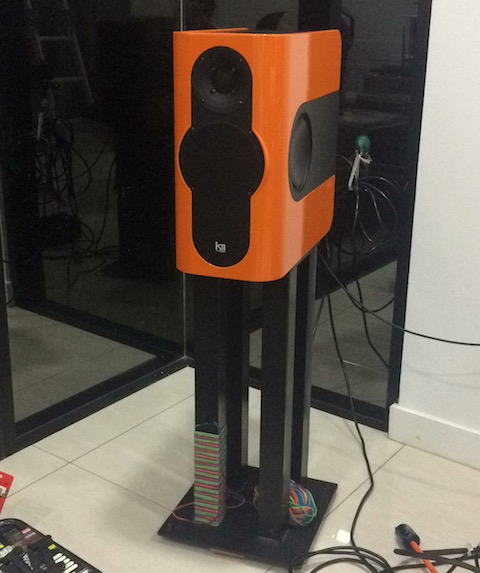 I then moved on to the wide open spaces of my living hall, where the acoustics give most loudspeakers a time not short of living hell. The only other loudspeakers which I have heard do well in this (though somewhat differently furnished) environment are a pair of big Spatial open-baffle loudspeakers in my neighbour’s hall (which has exactly the same dimensions and layout as mine). That the Spatials also cook the common dish of controlled directivity as the THREEs (though using a different recipe to achieve it) is interesting indeed.

In this open free-space setting, the THREEs, after a little experimentation with the level of bass adjustment which could be appropriately applied, could have again fooled one that it was some large floorstander, this time to a much more convincing degree than in a near-wall setting (and I suspect it would do even better on taller stands). Although I still had to sit somewhat nearer to the speakers for best results, the notional “equilateral triangle” of speakers to listening position was bigger than with any of the other speakers I had tolerably used in this environment. They played loud, deep and extended, and got on with the business of music-making in this rather hostile setting.

One of the things I noticed here is that, even playing compressed files which tend to fall to pieces in the treble when the wick is turned up, the THREEs kept their composure and rarely tethered over into a screech, which if they did, were simply showing up the limitations of the programme source. One is listening to the resulting output of the entire package of DAC, DSP amplification and drivers here, and while I could not do any meaningful comparisons with the digital gear, amplification and speakers I had on hand, I was quite certain I was likely to have been unable to equal the sonic results, let alone do it in the same compact form and elegance. 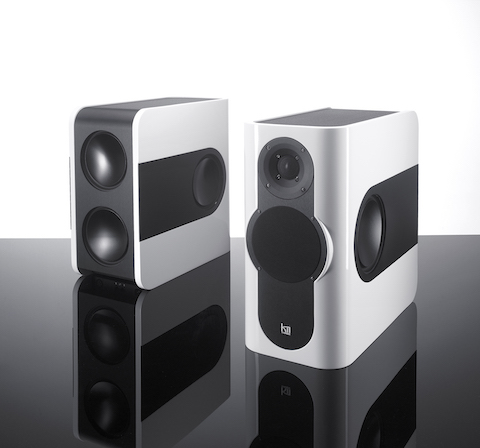 THE LAST WORD
Would one think I was even more impressed than before having had them in my own digs, and wishing I could afford a pair? Not just “yes”, but “(expletive) yes!”. Heck, even my wife asked if, after I had sold off all my other gear, we could generate enough to acquire a pair. Now, that’s more than a hint if I ever heard one, but I didn’t have the courage to tell her there was no way I would be selling off my collection of vintage turntables to fund the acquisition.

I went back to listening to vinyl via a 300B SET amp and high efficiency speakers with minimal crossovers after returning the THREEs and I realised I was too much of an omnivore to want to give these up. But the THREEs would be the first things I’d seek out if I had the spendable cash.