A kilowatt of power and more… McIntosh MC1.25KW monoblock 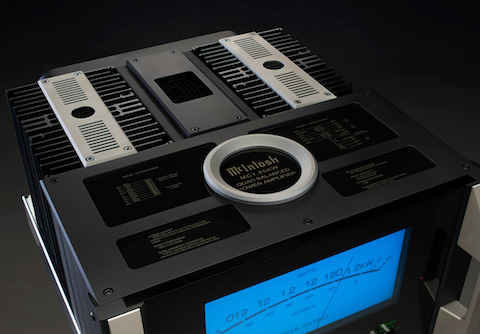 This flagship amp replaces the MC1.2KW and has been “redesigned from top to bottom.” Like the older model, you will need two in your system… yes, the 1.25 is a monoblock, each unit weighing a back-twisting 72kg or thereabouts.

According to the company, “the MC1.25KW outputs 1,200 watts into a single channel with a nearly imperceptible total harmonic distortion of 0.005%…” and this power is fully available into two-, four- or eight-ohms loads via the proprietary Autoformer technology. 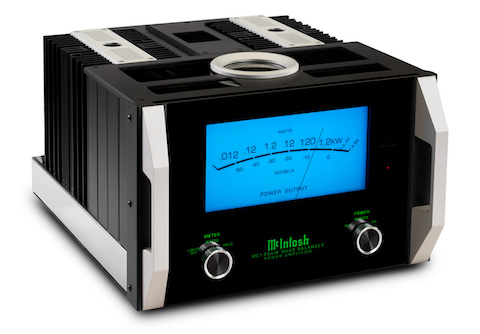 More from the press release:
Updates and enhancements abound in the MC1.25KW. A 50% increase in filter capacity improves the performance of low-end frequencies as well as increasing dynamic headroom. The top of the amp showcases an updated yet unmistakable McIntosh industrial design that will fit right in with current McIntosh products or those made decades ago. The audio Autoformer and power transformer remain located just behind the front panel but are now contained in new glass topped enclosures. In between them is new circular glasswork housing the amplifier’s name badge that is adorned with a decorative trim ring.

The rear of the unit features four McIntosh Monogrammed Heatsinks. Made from high quality materials with excellent thermal conductivity properties, these heatsinks are so efficient at dissipating heat that they warrant bearing the McIntosh “Mc” logo. They connect to advanced high current output transistors that eliminate thermal equilibrium lag time so that the first musical note played sounds just as good as songs played later in your listening session.

The heatsinks are capped with handsome ventilation trim plates. These trim plates and the circular trim ring are made from aluminium, and finished to match the front panel handles. 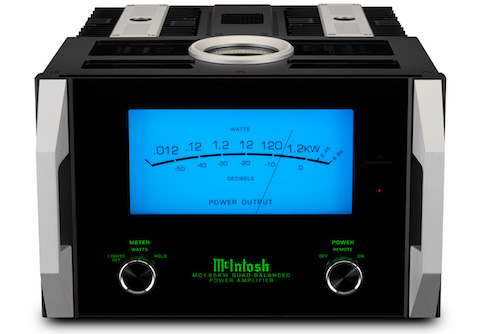 The AC receptacle has been repositioned to provide additional clearance so a wider assortment of power cords can more easily be used. All of this sits atop a polished stainless steel chassis which rests on four new redesigned feet that feature a chamfered edge. Other updates include an updated power transformer, heavier gauge internal wiring, upgraded circuit components, and power management system that will turn the amp off after a set amount of time when no input signal has been detected.

With all the changes and improvements made in the MC1.25KW, one thing that hasn’t changed is the large, fast responding 11” (27.9 cm) blue Watt meter that accurately shows the amp’s power output. Also unchanged is the signature black glass front panel with control knobs, illuminated logo, and aluminum end caps with handles. The front panel and meter have new direct LED backlighting for improved appearance and color accuracy.

Both a balanced and unbalanced output are included to make bi-amping or tri-amping your speakers easier; they can also be used to send the audio signal to a secondary system if your preamplifier does not have enough outputs or to connect a powered subwoofer.

If this has convinced you that you need a new amp, price no barrier, call your dealer.