Audio-Technica LP5 – the only turntable you’ll ever need? 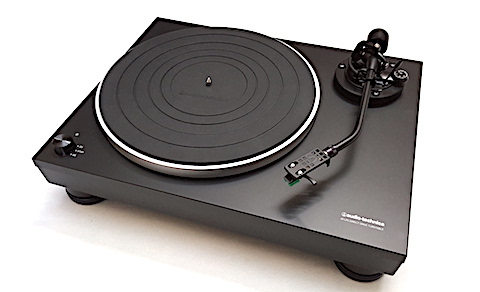 + Cheerful, good-looking and fun turntable that will get a beginner up and spinning records in mere minutes. A true plug-and-play platform with cartridge and phono stage bundled in and set up from factory. USB output capability.
– Not the most resolving vinyl playback platform out there. Will need careful placement as the chassis/plinth is microphonic i.e. if you tap the chassis, you’ll hear it on your speakers. Limited upgrade path.
Sound: 6/10
Value: 8/10

TRYING to figure out what all the fuss over vinyl is? Haven’t played any of the vinyl records you’ve been picking up over the past few years? Keen on reviving your collection of dusty records you haven’t looked at since college? Well, if you fall into any of those camps, there’s hope yet. The Audio-Technica AT-LP5 is an all-in-one vinyl playback platform which is ready to play from the get go.

The LP5 turntable is clearly a handsome device with clean lines albeit with a tad serious all-business demeanour. The matte black chassis or plinth is an all-plastic affair with a metal slab bolted in its base for more heft, contributing to the LP5’s decent 10.5kg weight. With turntables, a little bit of weight is a good thing as the mass tends to help control vibrations which would otherwise get picked up by the stylus and emerge through your speakers or headphones. 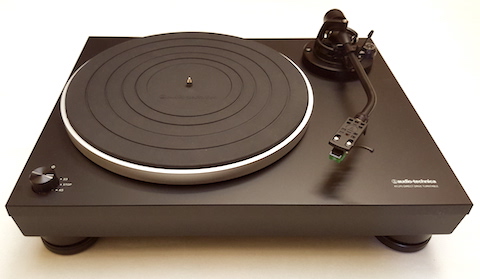 The Audio-Technica deck is a direct-drive device where the cast aluminium platter is spun by a high torque DC electric motor. Traditionally, direct-drive turntables have been maligned as inferior to belt-driven devices but the proof of a pudding is in the eating. With user selectable options for 33 1/3 and 45rpm, the LP5 would be able to play just about any of the recently-issued vinyl records. If you have a collection of 78s stashed somewhere, the LP5 will not be the vinyl spinner for you.

SETTING UP
All you need is to place the aluminium platter and rubber mat on, hook the LP5 to an integrated amplifier, pop on a record, deploy the tonearm lift and you’re listening to your records in no time.

This ease of use can be attributed to the built-in phono stage which alleviates the need to source an extra phono preamp, the ancillary wiring and the tedium required to set it up.

There’s also an on-board analogue-to-digital converter which outputs 16-bit/44.1kHz or 48kHz USB for direct hook-up to a PC for recording purposes if so desired. There are also no installation woes as the LP5 comes boxed with the AT95Ex cartridge already set up per factory settings. Easy peasy.

LISTENING
The LP5 is a fun turntable which dives straight into the music and doesn’t take itself too seriously. Listeners will be rewarded with a upbeat record player that has finger-snapping pace and musicality. Placing Dire Straits’ ‎Brothers In Arms on the LP5, there was a punchy bass dynamic that had my feet tapping along, accompanied by warm vocals.

Elevated in no small measure by the relative low noise playback capabilities, the AT turntable is able to provide a decent level of detail retrieval and was more than able to differentiate between the US and Japanese pressings of Michel Jackson’s Thriller album, quickly revealing the Japanese pressing’s superior clarity and dynamics on guitar and percussions.

For audiophiles or dyed-in-the-wool vinylphiles, if you’re thinking this would be a production turntable along the lines of a Technics SL1200 that you can tweak and modify to rival turntables at a higher price level, think again. The fact of the matter is that the LP5 is designed as a plug-and-play device and although you could hot rod the LP5 with heaps of aftermarket enhancements, the final outcome could well be mediocre given the deck’s relative lack of rigidity.

Case in point, the LP5’s plinth is largely plastic and it is prone to microphonics. If you run your finger on the plinth, the vibrations will be picked up by the cartridge and audible through your speakers. Tapping the stand the LP5 was placed on also resulted in some vibrations being picked up. Clearly, the chassis and its ability to isolate external vibrations could use some work. 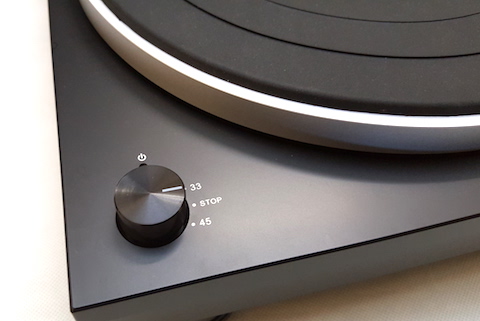 Side-by-side with my resident turntables, the Thorens TD124mk2 and Technics SL1200mk3D – both of which have been significantly modded and breathed upon, the LP5 was clearly falling short on resolution, inner detail, vocal density, instrumental timbre and richness. Further, switching phono stage duties to the resident EAR834P phono preamplifier, the tubed 834P delivered finer detailing and drive compared to the LP5 with its on board phono stage. An external phono preamp is a clear upgrade path to consider but would inevitably pile on cost and complexity of getting the system running.

That being said, the Thorens and Technics turntables cost much more than the LP5. Further putting things in perspective, just the 834P at the current list price of US$1,895 costs several multiples more than the LP5’s sticker price.

THE LAST WORD
The LP5 is a competent entry-level turntable which provides heaps of flexibility and musicality in an easy to use package. If you’re only interested in listening to your vinyl records with the least amount of fuss and you’re not keen on getting trapped in the debilitating quicksand that is equipment modding, then the LP5 may be just the answer.