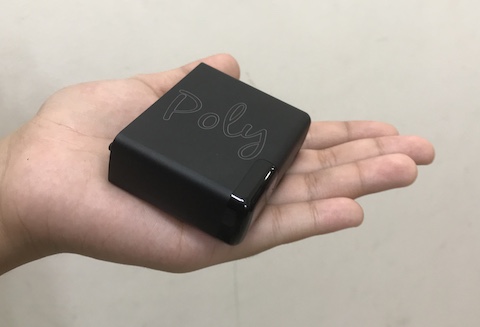 + A portable wireless powerhouse when combined with the Mojo. Good battery life and very solidly built.
– Minor bugs depreciate the user experience. Needs to be more user-friendly. Clicks and dropouts occur if not configured properly. App not available for Android devices as of May 1, 2018.
Sound: 10/10
Value: 5/10

THE premise for the Chord Poly is great – combine it with the excellent Mojo DAC/headamp, and it adds wireless Bluetooth or WiFi connectivity and allows playback of high-resolution files from microSD cards.

When it gets going, the Mojo/Poly combination is bliss – it’s right up there among the best-sounding head-fi devices you can lay your hands on.

Unfortunately – and it pains me to say this – the problem with the Poly is the user experience. Operational hiccups arise occasionally and this can make life with it very frustrating, but we’ll get into that later.

For those who have not heard of the Mojo, it’s a pocket-sized DAC and headphone amp that is compatible with all manner of high-resolution files – both PCM and DSD up to 768kHz and quad (DSD256) rates.

The Poly has been designed to complement the Mojo perfectly, in both form and function. It shares the same tank-like build and slots seamlessly into the Mojo (there are four points for this). There’s no catch or audible click when they come together but the fit is secure enough and the two units will not come apart easily. The Poly is about half the size of the Mojo, and when mated is quite a hefty affair (there’s an optional case available for the combined pair). 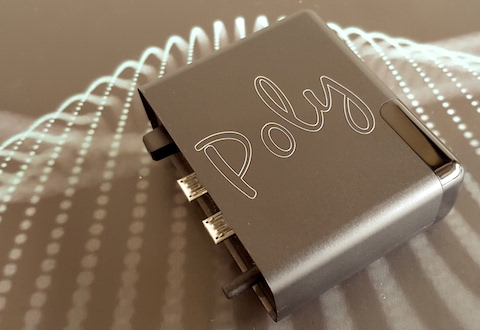 What the combined Mojo/Poly offers elevate the duo above most other portable players and similar devices. How it sounds, simply put, is fantastic. The sonic side of things are handled by the Mojo (review here) and there is absolutely no doubt about its pedigree.

The question is what the Poly brings to an already-excellent device. The answer? Loads. Here’s the list: Bluetooth A2DP, WiFi 2.4gHz and AirPlay connectivity, microSD card playback, is Roon ready and DNLA compatible.

But here’s the catch – getting this all working smoothly and glitch-free is a challenge. Chord’s GoFigure app (only available for Apple iOS devices currently) is essential to ease this, and even then, there were times the Poly stumped me. However, I will admit to my limitations and lack of knowledge to set up the Poly for Roon and DNLA playback, so I am looking at the Poly solely from the viewpoint of a mobile device user.

Without the GoFigure app (that’s every Android user, for now), you need to kick the Poly into WiFi hotspot mode with a supplied “key” or failing that, a paper clip works just as well. Not a very elegant method, unfortunately. Once connected, you’ll have to go through the set-up procedure, which is fairly straightforward. 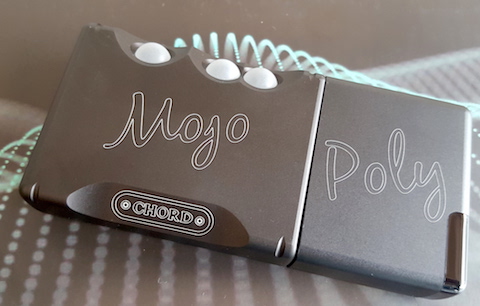 LISTENING
Once paired via Bluetooth and the WiFi networks properly configured, the music began – and oh what a joy it was. I have never heard Bluetooth sound this good. Neither, in fact, had many of my colleagues at the office. One “party trick” I’d do was to ask them to use their regular earphones (even crappy stock ones) and connect their smartphones via Bluetooth and play their own music. Their first response – almost universally – was “wow!” followed by something along the lines of “I’d never heard it sound like this before!”.

For even better performance, load up a microSD card with the highest-resolution files possible and you can listen to them anywhere. It really makes the daily commute so much more bearable – whether listening via head/earphones or plugged into the vehicle’s audio system.

One would think that in a noisy environment such as a moving car, higher fidelity wouldn’t make much difference – but with the Mojo/Poly it sure did. There’s simply no comparison – deep, weighty bass; open, transparent midrange; sweet, extended highs and an openness of sound all combine to make the music flow so much better. As I mentioned in the previous Mojo review, this is easily the best upgrade you can get for your vehicle’s audio system. The Poly increases its utility even more as it allows easier playback of high-resolution PCM or DSD files stored on microSD cards! 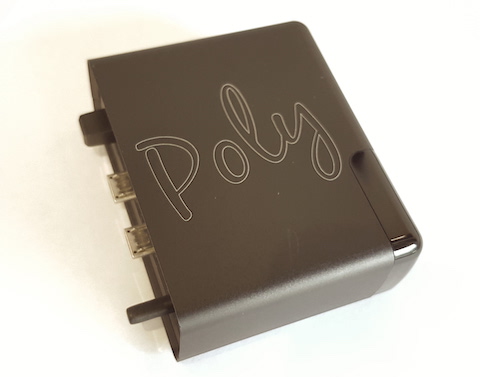 However, it wasn’t always smooth sailing. Operating the Poly is not intuitive and will require multiple reads of the user manual and the online FAQ.

If connected via Bluetooth and out of range of a configured WiFi zone, dropouts occur every two-to-three seconds or so. This essentially rendered the Bluetooth mode useless for a large part of the review period. This caused me no end of anxiety as there seemed to be absolutely no reason why this should occur. It wasn’t until the GoFigure app was available when I learnt it was because the Poly constantly searches for a WiFi network – the solution then is to switch on the Poly’s “Airplane” mode. Again, hardly ideal.

But that was not all – there were times when the Poly simply could not be detected by the transmitting Bluetooth device. Worse, there were a few occasions when the undetectable Poly refused to shut off. I had to leave it alone for a few hours or allow the battery to run down before it decided to work again. I noticed this would occur especially when switching between smartphones or if I turned the Mojo/Poly off without disconnecting the Bluetooth on the transmitting device first. 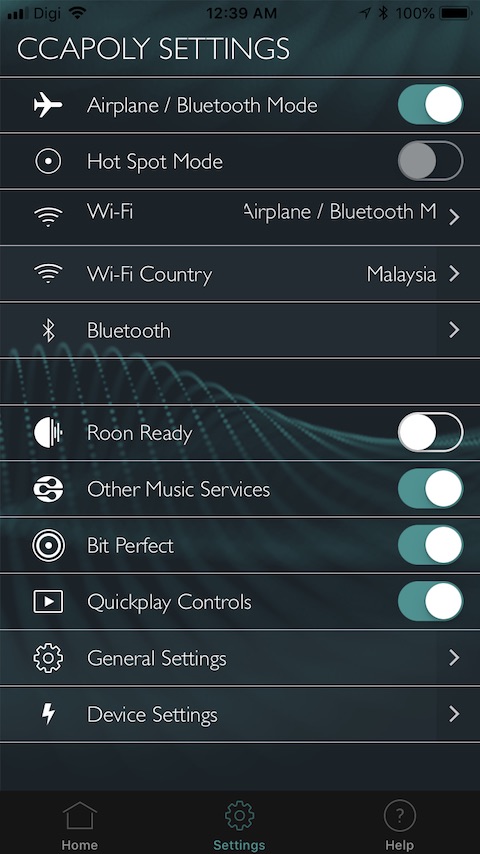 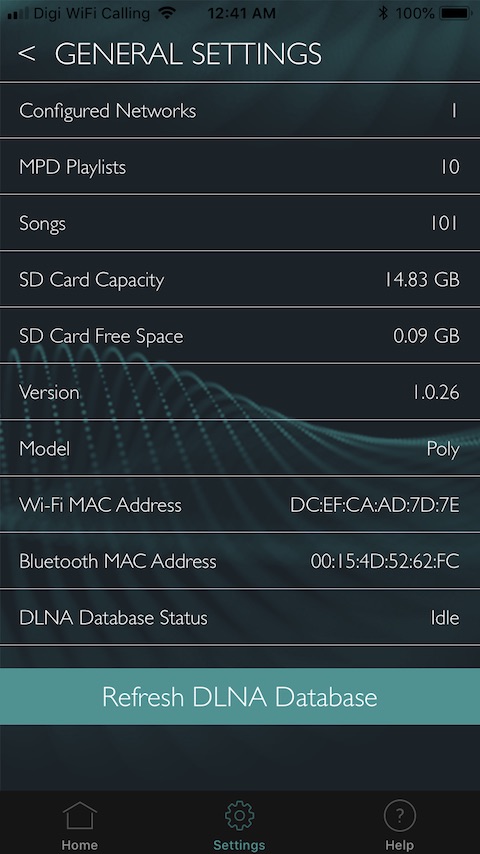 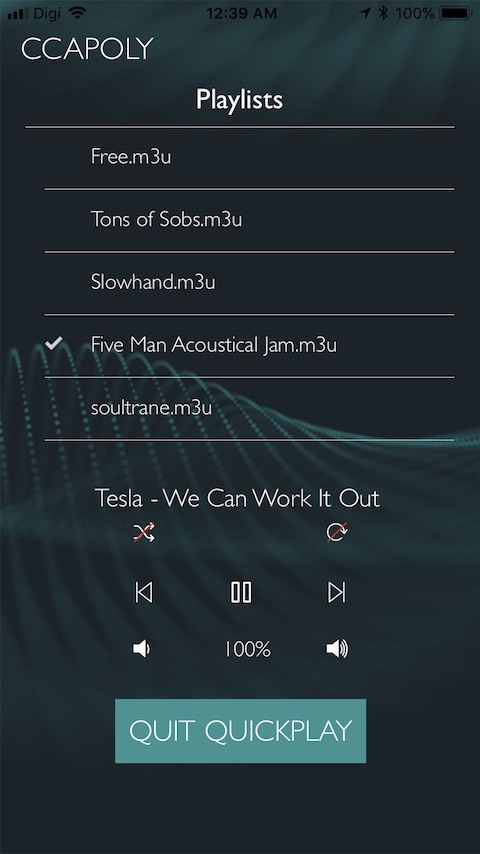 Another thing that causes a brief dropout is if you switch the “Airplane” mode on or off.

Playing files off the microSD card using the accompanying GoFigure app is a great feature, but note that it only reads playlists and not the individual files on the card. Even so, you can only see the title of the song currently playing and not the entire playlist.

THE LAST WORD
Purely from a sonic aspect, the Mojo/Poly combination is absolutely fantastic. Viewed on its own merits though, the Poly falters. User-friendliness is definitely an issue – whether the GoFigure app is available or not. And for that matter, the app could definitely be improved further too. For practical uses, the Poly is not robust enough to work glitch-free. Unless Chord can figure out a way to make it work smoothly, this would only interest those who absolutely must have wireless connectivity and are prepared to live with its idiosyncrasies.