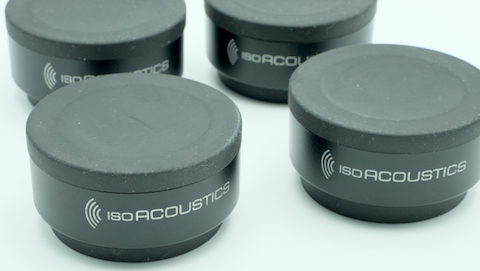 + Reasonably priced isolation feet which can provide good lower mid-range and upper bass frequency isolation for speakers and microphonic sources especially on lighter furniture.
– Only really effective on highly microphonic sources such as turntables and under speakers, not a magic bullet for CD players, DACs and amplifiers.
Sound: 5-7/10
Value: 8/10

ISOACOUSTICS has come a long way from its roots, providing speaker supports for studio monitors, and its range now boasts a line of isolation products to suit bookshelf speakers, floorstanders, guitar amps and other electronics.

I have been a fan of its ISO-L8R series of speaker frames (the cheaper versions of the Aperta frames previously reviewed here), using them under a number of small bookshelf speakers (Harbeth LS3/5a and KEF LS50 principally). With these frames, the isolation from the surface they stand on are superb, allowing you to use speakers on domestic furniture which is not principally meant for audio equipment.

The ISO-PUCK takes the company’s philosophy and applies it in a small puck-like appliance. The top half has a suction cup which adheres to your equipment if it has a smooth surface and the bottom, a similar suction-type foot. The two halves are joined by a proprietary elastomer joint which provides the isolation effect.

Each puck can take up to 9kg of weight, so a trio will support 27kg. Four pucks will support 36kg – ample for most speakers and equipment save the heaviest floorstanders (which are better served by IsoAcoustics’ GAIA range of threaded feet). 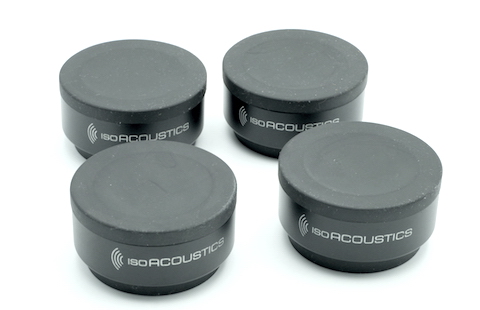 The principal use is for speakers, but it may also be used to support microphonic electronics such as turntables.

I tested four PUCKs in two main settings: Under an Audio Note AN-E speaker (with the other as a control) and under a Denon DP80 Direct Drive Turntable. I also tried them under my EAR 859 single-ended triode Amplifier.

LISTENING
As a speaker support: There is a very clear effect of clearing up the bass to upper mids – rhythms are easier to discern and there is a much more “foot tapping’ quality” to complex rhythms, such as on Dave Brubeck’s seminal Take Five. Imaging also improves and there is a suggestion of a deeper soundstage. On large orchestral work such as Lisa Batiashvili playing Tchaikovski’s Violin Concerto, the orchestra’s “breath” under Daniel Barenboim’s direction ebbs and flows with greater fluidity. 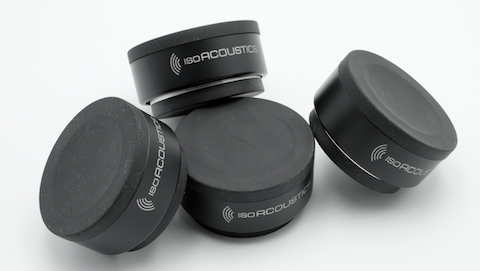 Under the turntable : As the DP80 is not a suspended turntable, the quality of the support is quite important and in this case, the ISO-PUCKs reduced mid/upper bass feedback effectively, especially when I was using a Miyajima Labs Kotetu Mono MC cartridge.

This cartridge has no vertical compliance and as such is very sensitive to vertical bass feedback. The ISO-PUCKs reduced a slight buzzing which I detected on the plucking on Paul Chamber’s bass on an original mono 6-eye pressing of Miles Davis’ Kind of Blue. On a more modern Classic Records 33rpm pressing of the album, using a Hana SL MC cartridge, the mid bass was also cleaner, making it easier to feel the leading edges of the double bass, but this was not as obvious as with the mono cart and mono pressing.

THE LAST WORD
I heartily recommend the ISO-PUCKs for anyone who is looking for speaker or turntable isolation, especially if you are sensing feedback or colouration in the bass to lower mid-range. If you are looking to isolate small bookshelves, I would look to the ISO-L8R or Aperta Frames which are easier to use in that context, but these pucks worked well under big bookshelves.

If you are looking to isolate less microphonic equipment, I would look probably look elsewhere.

The Relentless pursuit of Dan D’Agostino
Kronos Audio Reference phono preamp… is this the best?