Kronos Audio Reference phono preamp… is this the best? 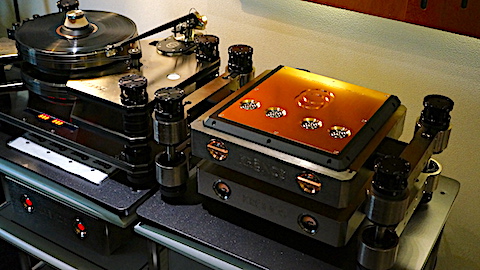 KRONOS Audio has made quite a name for itself in analogue circles over the past few years with its exotic turntables – the Pro, Sparta and 0.5. Now, as an appropriate accessory from the Canadian company, comes the Reference phono preamplifier, a collaboration with True Life Audio of Greece and based on design specifications from Kronos founder Louis Desjardins.

Desjardins was in Malaysia on Saturday as Malaysian high-end store Perfect Hi-Fi celebrated its newly-minted Kronos Audio dealership by launching the Reference to vinyl enthusiasts here.

Clearly, Desjardins is passionate about his design philosophy and no stone is left unturned. So how different is the phono amplifier from the True Life Audio ARGΩ?

“This is a much higher level. The Kronos Reference phono amplifier is a completely different design. 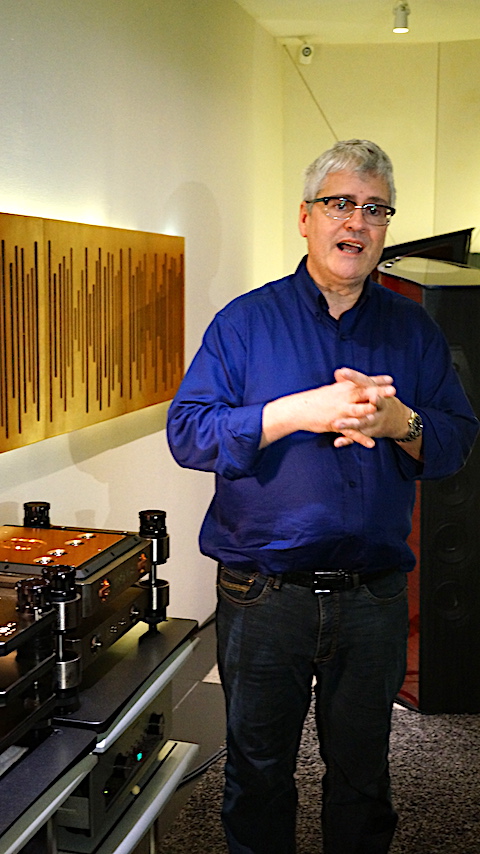 The Reference is a visual delight, comprising two separate chassis – signal and power – to isolate electrical interference, with metallurgy alchemy emphasising the euphonic properties of copper.

“The chassis frame is made from aluminium phenolic copper alloy whilst the top and bottom are brushed solid copper plates weighing 7kg each,” he added.

The name “Kronos Reference Phono Amplifier” is boldly etched onto the top plate alongside its prominent logo that is lined by four circular ventilation outlets towards the bottom. Both chassis sit firmly on separate Kronos SCPS stands that can be adjusted to isolate resonance.

“Transistors give a staggered nature to sound and only tubes are capable of reproducing natural sounding analogue sound.” 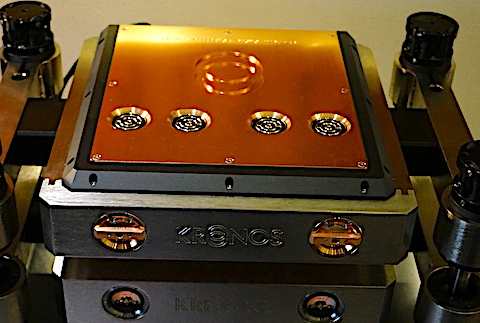 The phono amplifier design itself is also a dual mono topology with the RIAA stage handled by a pair of 12AU7 and 12AX7 tubes for each channel. Did he choose the smaller tubes for a reason?

“The tubes were chosen for their relatively low noise design and near absence of microphonic attributes compared to other tubes such as the 6SL7.”

It is no secret that the best sound comes from new old stock (NOS) tubes and Desjardins confirmed this: “Very NOS. Very rare. I don’t really want to say what tubes these are, there might be a few left and these tubes are US$500 each. I don’t want them to become US$1,500!

“These are the best 12AU7s ever made, I bought the whole stash that came up and I have never heard 12AU7s as good as this.

“I bought (enough) for 25 phonos and would have to buy more, find them or change tubes for the next batch. They have to to be British, they have to be from the 50s or 60s, they have to be military and have enough stock to match the tubes.” 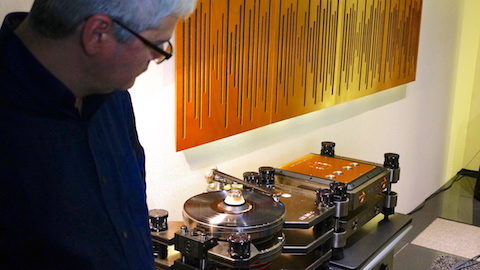 He assured that all the tubes in the production models are meticulously matched to give the best possible balanced sound. Every component is painstakingly connected via point-to-point wiring on a Teflon board. The MM stage has a hearty gain of 44dB.

The pièce de résistance is the step-up transformers (SUT) used in the MC gain stage design. SUTs result in superior quietness in amplification void of added noise inherent with transistor or tube amplification. The launch model came with a user selectable 10:1 and 20:1 gain which pushes out a total output of 64dB and 70dB for the MC stage.

“If someone has a lower output cartridge, we can do 30:1. The step-up is replaceable. We could go up to 75dB or78dB output if required.

“All transformers including the power transformers are hand-wound by the artisans at True Life Audio. This SUT, if sold as a unit, will cost US$10,000!

“We developed eight SUTs before deciding on this design. I know it sounds crazy but if you compare this to Audio Note or Kondo, it’s much higher performance and this doesn’t cost US$100,000. This is the most dynamic phono I have ever heard.”

What about introducing a variable impedance selector to the design?

Desjardins responded firmly: “With step-up, you don’t do that. If you put a resistor, you kill the sound. Anybody that does an adjustable impedance of a phono will compromise the sound.”

There are two knobs on the front panel for gain selection and equalisation (EQ). It is interesting that the EQ comprises high-pass filters that allow you to choose between three settings to “normalise” bright sounding pressings that are proliferating the market nowadays.

When asked if he tweaked the RIAA curve for the EQ, Desjardins said: “No, we use filters for this. It doesn’t affect the sound.”

This, together with the selectable gain knob, will give you countless hours of listening with the flexibility to match a large variety of cartridges.

“If you have a Kronos turntable, its Black Beauty tonearm cable plugs directly into the SUT via a single connector to minimise signal degradation,” he said.

There are provisions for connecting up to two tonearms via the custom Kronos connector or the regular single-ended connectors. A flip switch located at the back-panel toggles between the tonearms connected. There is a choice of single-ended or balance outputs to connect into your preamplifier.

Towards the end of the session, I asked if there are new turntable models or other equipment forthcoming.

“Just this for now. It is very good.”

The design topology, choice components, NOS tubes, hand-wound transformers by three generations of artisans and the looks that launch a thousand smiles make this truly high-end driven by passion. Desjardins did it with the breakthrough Kronos line of turntables and now, it appears that he is doing it again with the Reference phono preamp.

The Kronos Audio Reference phono preamplifier is priced at US$45,000.

See Meng is a banker turned sourdough enthusiast. He likes his music as natural “tasting” as his sourdough loaves. Other than classical or jazz, his taste of music never left the 1980s.