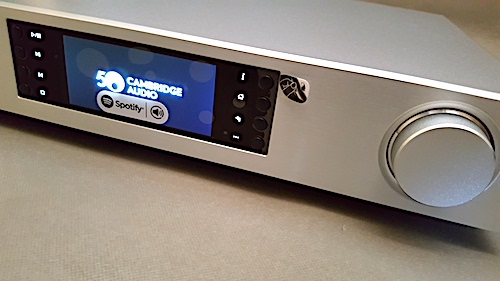 + Musical and thoroughly enjoyable digital preamp/streamer; a big and fun sound which only gives a little away to much more esoteric DACs; great connectivity and very easy to use; can act as a single-ended or balanced preamp into a power amp; all the digital connectivity you might want or need.
– Only decodes up to single DSD; lacks a headphone output; not Roon Ready; not as detailed or transparent as the best digital sources.
Sound: 7.5/10
Value: 9/10

CAMBRIDGE is a name which brings to mind great associations with the English city, the university and a plethora of technology companies which have sprung up in the vibrant eco-system in the surrounding area. Only recently has the name been marred by the alleged data mining by an analytical company. However, in the context of audio, many great designers and brands have their roots in the area. Cambridge Audio is one of the stalwarts and has been the vanguard for “proper hi-fi” but at prices which are affordable by people with normal incomes.

The Cambridge Audio CXN (V2) network streamer represents the third generation of its acclaimed StreamMagic platform. It is a handsome unit in the flesh, especially in the silver finish, with the large screen and control knob on the “floating” fascia making for a striking visual. The build is solid and there is nothing to complain about the quality, but it isn’t a heavy, over-engineered unit like the Sony HAP-Z1ES.

Connectivity is generous with network, optical Toslink, co-axial SPDIF and USB Type A and USB type B inputs, and outputs are also well specified with Toslink out, SPDIF, analogue single-ended and balanced. 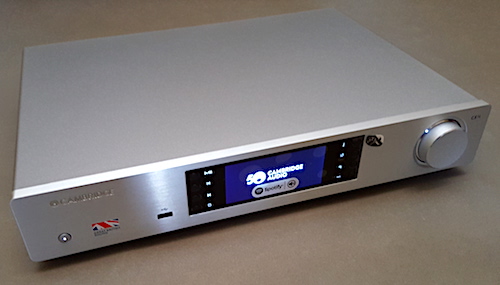 Functionality is also generous – the streamer accepts uPnP, Apple Airplay, Spotify Connect and Tidal via the CXN Control App through the network port. You can also play files on a connected USB drive on the Type A port (though this port does not operate with an iOS device unlike some other streamers) and you can use it as a DAC through the SPDIF, Toslink or USB-B ports.

To top it off, a volume control is incorporated which makes the unit a fully fledged digital pre-amp. There is also Bluetooth Apt-X via the USB-A port, but that requires the purchase of an optional Bluetooth dongle, which I was unable to test. The streamer also connects to Internet radio stations via vTuner.

LISTENING
I tried the CXN principally as a streamer in a pre-amp configuration into an Audiolab M-PWR power amp and KEF LS-50 speakers. But I also tried it as a source into my main rig with an EAR 859 single triode amp and Audio Note AN-E speakers to compare versus my own Mytek Brooklyn DAC+ and a Chord Hugo2 on loan. My listening notes are largely from the first system. I tested it mostly in a balanced configuration which was superior to the single-ended outputs.

The Cambridge Connect app on your phone (iOS or Android) is your best friend – it provides a smooth and fast control experience (except for the volume slider which is inexplicably hard to use. My tip is to use your volume rocker on the phone, not try to slide the slider). The streamer saw my NAS and HAP-Z1ES as uPnP devices and pulled files off with both very little delay. There were no issues with PCM files I tried up to 24-bit/192kHz and single-rate DSD resolution. The CXN does not decode double or quad rate DSD. Apple Airplay works well, though there is a small penalty in fidelity. Spotify Connect is rendered well – the up-sampling filters make these compressed streams very listenable.

The initial impression after warming up for a couple of hours on BBC Radio 3 on vTuner was a big and fun sound – this streamer has a very lively presentation and there is nary a dull moment as you flit from track to track and genre to genre. 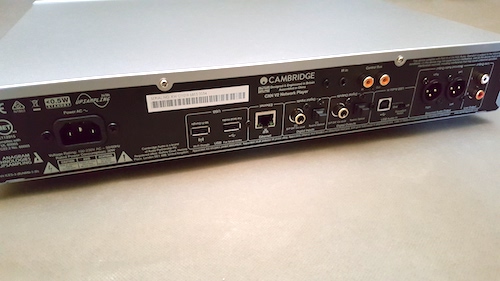 Back to my listening notes, the CXN really shows the skill with which the designers have tailored their polynomial digital interpolation filters (named ATF2), which up-samples all the inputs to 24-bit/38 kHz PCM and then are then converted to the analogue domain by dual Wolfson WM8740 DACs.

Overall, the tonal balance is even, with only a very slight warmth in the upper bass. The midrange is open. On female vocals such as Hannah Reid’s luminescent voice on Hey Now by London Grammar (24/44.1 FLAC from HDtracks), the solidity and projection of her voice in the context of the other instruments is painted in an enjoyable manner. Imaging is solid and stable, without any smearing or drift as instruments scale up and down their tonal range.

Listening to GoGo Penguin’s Prayer on Tidal CD quality stream, deep bass opening is rendered in a solid fashion, though it does give away a little to the more architectural bass which I have heard from DACs such as the Chord Hugo2. But rhythm and pacing are good, and conveys the rhythm of Dave Brubeck’s Take 5 (Single DSD rip from SACD) in a convincing manner.

Switching to the Bill Evans Trio’s seminal 1963 live recording of Sunday at the Village Vanguard (24/88 FLAC), the upper registers show good delicacy and shimmer on Paul Motian’s brush work on the cymbals, and good height and projection over the top of the speakers. Soundstage depth on those tracks also was good, with the diners in the Village Vanguard placed in context to the musicians.

I then spent the next few days just listening to Tidal streams and comparing tracks – it didn’t seem like I was missing much and I was really enjoying using the streamer to explore new music.

Now, the CXN vs the HAP-Z1ES – what became apparent was that the CXN isn’t quite as transparent to the source as the Sony, which pulls more detail out with more delicacy, more soundstage depth, a bit more air and more translucency to the images of the instruments. But what the CXN gives away in these aspects is made up by its fun quotient. The Sony comes off as a little too polite next to the CXN. Comparing to the Mytek Brooklyn DAC+, the CXN again has a little less air, a little less refinement and a little less detail but the Brooklyn costs a fair bit more and isn’t a streamer. As previously mentioned, the CXN doesn’t dig out detail or have as solid an architecture to its sound compared to the Hugo2.

THE LAST WORD
From a value for money perspective, the CXN is a no-brainer – it works and works very well. It’s musical and fun to listen to and for most people with real world hi-fi systems, it’s all the DAC or streamer that they will likely need. If you have a more esoteric system, there are DACs and streamers which will show your system off to better effect, but the CXN will not be embarrassed in that company.

If only it were a Roon Ready endpoint (I could only use it with Roon via USB or via AirPlay) and if it had a headphone output for those into head-fi – this would be an almost perfect streamer!

Johan is a business consultant by profession but an electrical engineer at heart. He has been building and tinkering with hi-fi and audio equipment since his teens. Loves jazz, classical and classic rock. He also used to live in Cambridge and so has a soft spot for hi-fi from Cambridge.