The curious case of the Sony DMP-Z1 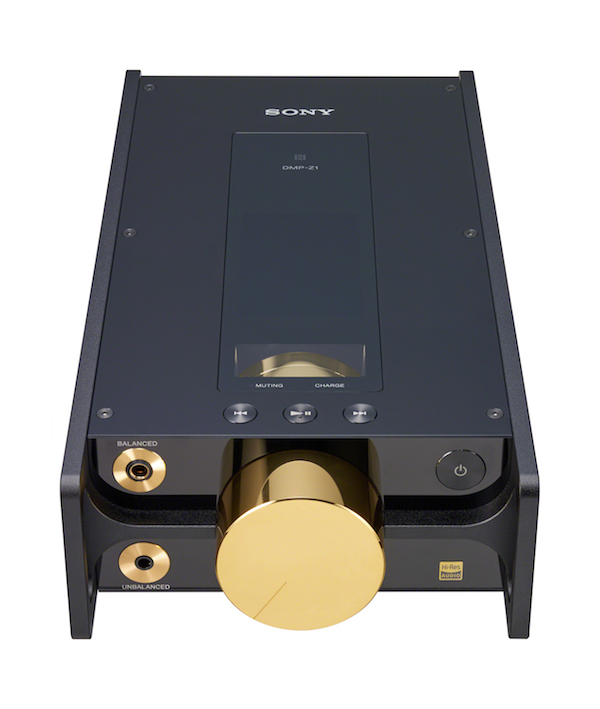 IT isn’t what most of us would perceive as a “portable” product, not in the conventional sense, so this explains why the Sony DMP-Z1 digital music player does not carry the company’s iconic “Walkman” designation. It weighs a fairly hefty 2.5kg – in comparison, Sony’s flagship Signature Series NW-WMZ1 Walkman is a mere 455gm. And when it hits the stores in a few months, the DMP-Z1 (US$7,000-8000) will also retail at about three times the price of its more compact sibling.

Well, it is a desktop component then. Well, not exactly either… and even the Sony engineers are a bit evasive about this, when I put the question to them at the launch of the DMP-Z1 and four new Sony headphones, on the sidelines of the Hong Kong High-End Audio Visual Show recently. The DMP-Z1 is apparently targeted at the home user with custom needs. And no, not those wanting to add on to a system of separates.

“Some home users wanted a player with more output power for the headphones; the DMP-Z1 is rated at 1,500mW (into 16 ohms), the others are around 750mW. They asked for a more powerful headphone amp on a media,” said Tomoaki Sato, a Sony senior electrical engineer and Walkman project leader. 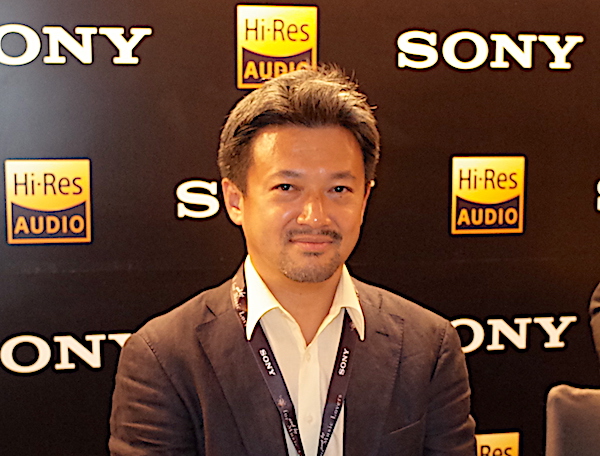 The other factor that piqued curiosity – the DMP-Z1 is an “enclosed” all-in-one, in that it has headphone outputs (balanced and single-ended via stereo mini-jack and balanced standard-jack), a high speed USB Type-C (2.0 compliant) receptacle and Bluetooth capability (you can stream music from your smartphone but you can’t use wirelessly connect to headphones with it), and it supports NCF.

If you want it to be the source for a bigger system of separates, sorry… you cannot line it out to an integrated amp or power amp, in the purist sense, via analogue RCA or XLR outputs as none are provided. You’d think such a feature would be essential for what has the potential to be the front end of a killer desktop hi-fi system.

“The focus was purely on sound quality via the headphone amp, and adding the analogue outputs would have affected this,” Sato added. The unit, he said, can also be used while it is being charged, so there’s no down time. You can extract about eight hours of playback on high-resolution music, nine on MP3 files, thanks to the five lithium iron batteries on board supplying independent and stable power to both the digital and analogue blocks.

Later, when I asked Sato about the weight, he smiled and said Sony’s premium headamp amp was even heavier, but this wasn’t a deterrent to a segment of users. Apparently, Sony sees the DMP-Z1 as also a “portable” player one can carrying along on holidays – one reason for the extended work on the battery/power supply. 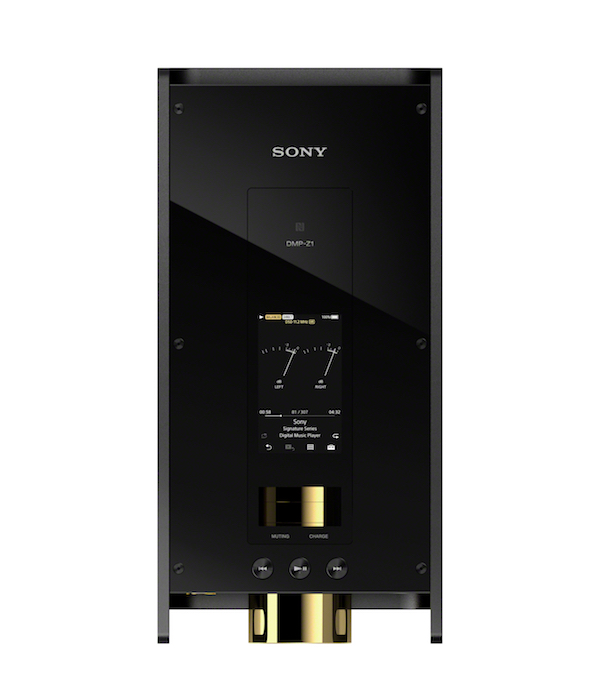 If there’s one thing there’s no confusion about, it’s the amount of technological goodness Sony has crammed into the DMP-Z1, pulling out all stops. High resolution it certainly is, boasting Native DSD 11.2MHz and PCM 32-bit/384kHz compatibility. You also get massive built-in storage of a 256GB, and if this isn’t enough, expansion is via dual micro SD card (microSD/microSDHC/microSDXC compatible) slots. The gold-plated volume dial is a class act on its own… 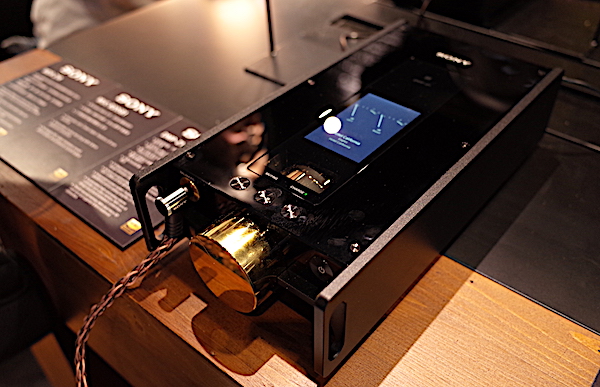 The separate power systems for the digital and analogue sections work to prevent noise transfer from the former to the latter. Clean power is fed to the headamp section via an independent analogue battery which uses simple circuitry. A tap on the player’s touch panel interface lets you switch the power mode from AC to battery. Also check out the analogue level meter on top.

According the Sony, “The H-shaped aluminium chassis presents a high rigidity frame structure that eliminates vibration and reduces resistance, thereby delivering clear and powerful low frequency performance. In addition, isolation of the amplifier board by physically separating the amp board and main board using the H-shaped chassis further reduces noise which will affect sound quality. This isolation blocks noise and provides areas for connecting to ground on each board connecting to the chassis. This ensures the listener experiences transparent sound free from distortion.” 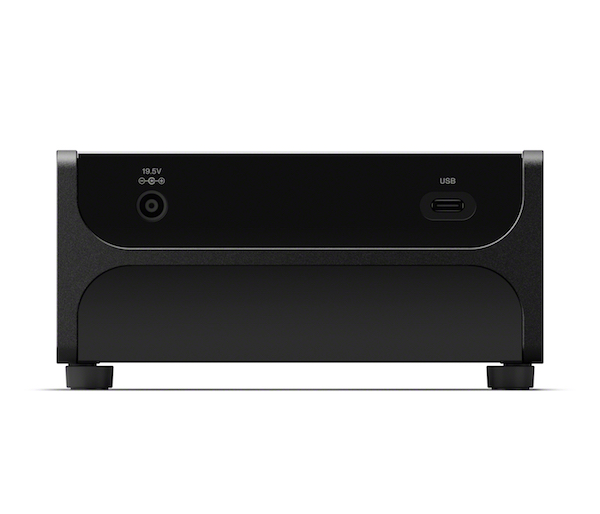 The onboard DSD remastering engine (there’s an on/off option) lets you convert all PCM signals to DSD 5.6MHz, which Sony says is a first for digital music players. Furthermore, the newly-developed “Vinyl Processor” recreates “the acoustic phenomenon unique to vinyl playback such as the tone-arm resonance, tiny surface noise and the rich sound from the vibration by acoustic feedback from the speakers to the turntable.” More sound settings are provided – direct source, 10-band EQ, tone control, DSEE HX and dynamic normaliser. 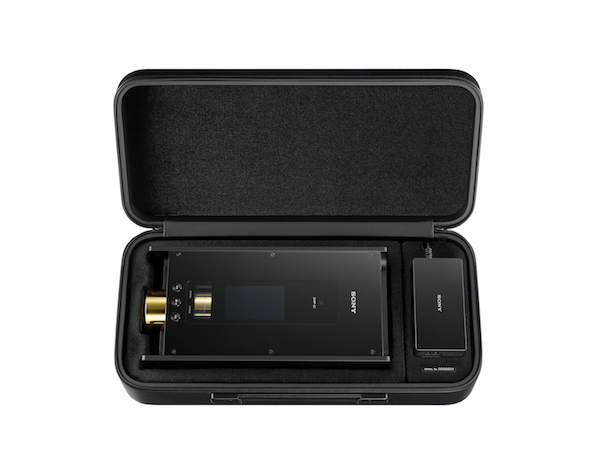 The level of attention and feedback the DMP-Z1 has garnered has surprised Sony, and release date for the player has been pushed back from October to December. The Japanese electronics icon has the ability to turn out enduring products that, while not targeted at the  mass market, achieve a dedicated following outside the mainstream. A good example is the HAP-Z1ES hard disk player, which is like nothing else in the market and has been around for more years than you would expect, in an age where manufacturers replace their products with the clockwork regularity. Whether the DMp-Z1 will attain the same status is anyone’s guess – the eye-watering price tag alone is a deterrent. Yet, one suspects Sony knows something about the market that most of us don’t.