Sony DMP-Z1 – the ultimate DAP and a conundrum 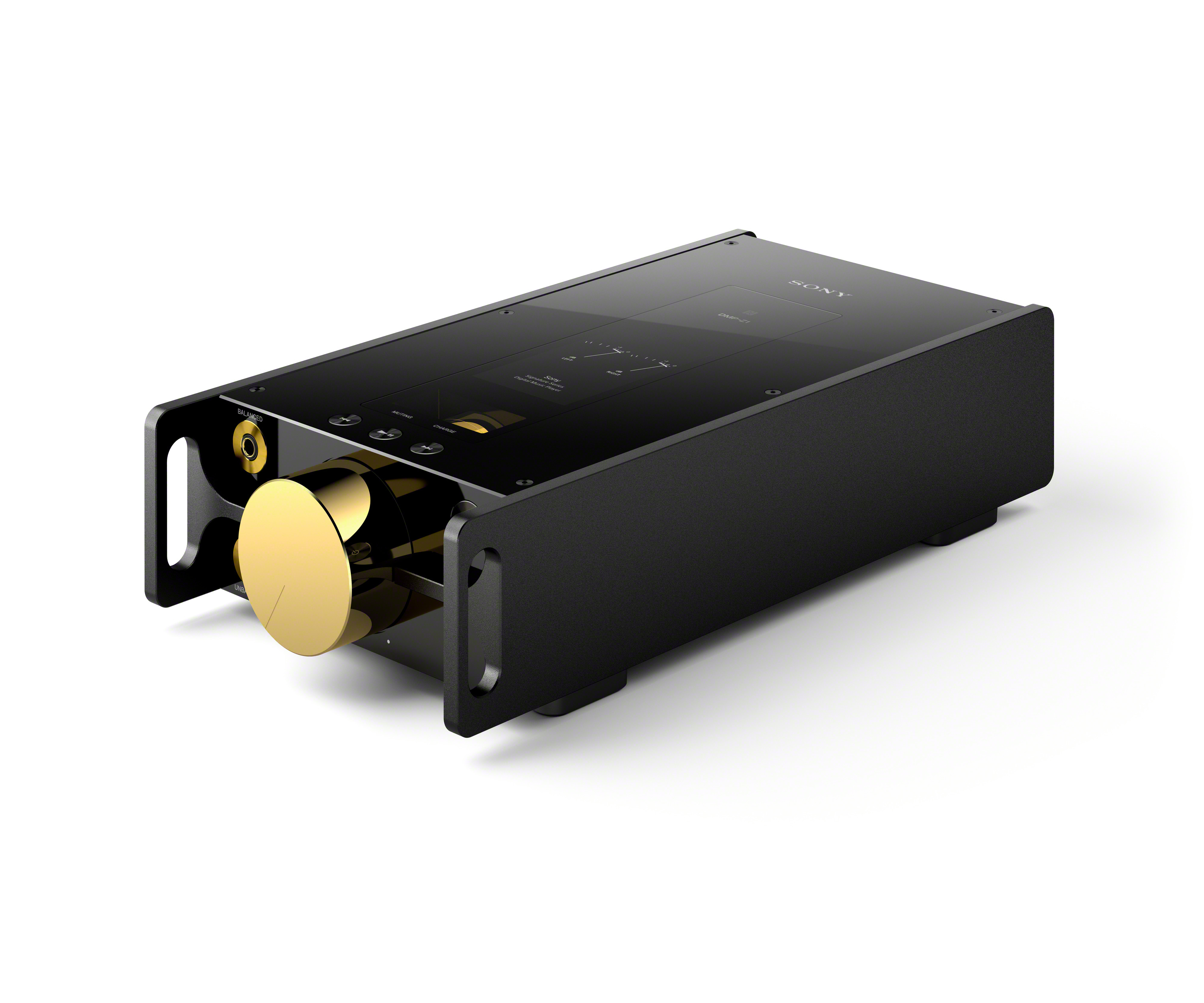 + Superbly even-handed, detailed and relaxed presentation – very much the Sony house sound, but with greater insight and weight, especially with DSD remastering mode on; Two MicroSD card slots combined with on board 256GB storage ample for most use; plays back practically all digital audio file formats; luxurious industrial design with the large, tactile gold volume knob.
– No network streaming capabilities; large size and weight precludes anything other than stationary home use; can be a little too laidback for certain genres of music.
Sound: 9/10
Value: 5/10

SONY really got heads scratching when it announced the DMP-Z1 player in August 2018, along with a slew of other premium personal “Hi Res” equipment. The DMP-Z1 is unlike the others – a category of one. Not content with the flagship Walkman NW-WM1Z, Sony takes it several steps further in digital audio player design with the DMP-Z1.

Like the NW1Z, the DMP-Z1 is a standalone battery-operated non-networked DAP, and shares the same homegrown operating system which works well. What it doesn’t share is the portability. As such, the 2.5kg “transportable” unit is five times the weight of the NW1Z. It offers all the usual Sony refinements – DSEE HX, Dynamic Normaliser, 10-band EQ, Direct Source and DSD remastering (which converts all PCM to DSD 5.6MHz).

What’s new is a so-called “Vinyl Processor” which attempts to recreate “the acoustic phenomenon unique to vinyl playback such as the tonearm resonance, tiny surface noise and the rich sound from the vibration by acoustic feedback from the speakers to the turntable.”

It can also be used in USB DAC mode via the USB-C connector on the rear, as well as a Bluetooth receiver and transmitter to suitable Bluetooth audio devices. Analogue outputs are limited to a 3.5mm TRS mini-jack connector and a 4.4mm TRRRS JEICA standard jack for balanced outputs. Both jacks are wired to the PCB using Kimber Kable.

There are no line outputs – this is reportedly to avoid compromises on the headphone output. Headphone output power has allegedly been increased to 1,500 mW into a nominal 16-ohm load from the balanced terminals, which will handily power even the most difficult to drive headphones. On the unbalanced jack, 500mW is on tap, which is also plenty for most headphones.

The batteries and power circuitry are also worth a mention – the DMP-Z1 can be used in offline mode, where separate batteries power the analogue and digital boards to limit noise. When plugged into the mains via the supplied adaptor, the batteries can be charged whilst powering the unit.

The build is solid, with a premium feel on all the switchgear, but none more so than the large gold-plated analogue-domain volume knob which has a superb tactile feel and is placed up front and centre.

TESTING
I focused on the only practical use case of home listening, using high-end IEMs or headphones. I did also test Bluetooth receiving from LDAC capable devices, but this was not the bulk of the listening.

For transducers, I used two pairs of headphones – Grado PS1000e and Focal Elex. I also tested it using IEMs – Sony Malaysia was kind enough to supply a pair of its flagship IEMs – the Z1R, but I also tested the player with my own Shure 846 IEMs.

I did also try it as a USB DAC driven by an iPad Pro 12.9 using a USB-C to USB-C cable, but that was only for a very brief period as I don’t see this as a primary use case.

I tested the Bluetooth receive and transmit modes as well, but did not do any critical listening as this is again, not the raison d’etre for this product.

LISTENING
Despite using “off the shelf” DAC chips instead of proprietary DAC architecture, the Sony house sound is very much embedded in the DMP-Z1. I am familiar from listening to my own cheap A35 DAP as well as my own HAP-Z1ES and a borrowed Sony NW-WM1A. The Sony house sound is best described as very even-handed, with very clear midrange, taut dynamics and a delicate high end. There is a very relaxed, unforced quality to this house sound.

The DMP-Z1 takes this further, with more delicacy, more detail retrieval, and the ability to drive headphones of all shapes and sizes. Primary listening was done with the Grado PS1000e and it was clear from the initial listening sessions that the DMP-Z1 had this ability to present all of the music in a very unforced manner, laying out all the detail for you to perceive, should you choose to.

Specifically, on Charlie Haden and Antonio Forcione’s duet album Heartplay (Naim Records, 24/192 FLAC files from HD Tracks), the cozy and relaxed interplay between these two virtuosos on the double bass and guitar respectively was a warm and enveloping experience. The DMP-Z1 painted the soundstage well, projecting the instruments with good “volume” in the spaces they occupied as well as the “space” between the instruments. The bass was full, though not overblown, which is often the case.

On to classical and my reference tracks of Herbert von Karajan conducting his 1963 cycle of Beethoven’s 9 symphonies (TIDAL MQA stream, with the DMP-Z1 in USB DAC mode) continued reinforcing the smooth, detailed and unforced qualities of the DMP-Z1 – with good scale and organisation of the soundfield in and around the orchestra.

I retested the top tracks with a pair of Focal Elex open-back headphones which yielded a slightly more forward presentation overall, even if the midrange was a little more recessed than with the Grados. Again, the smooth and unforced nature of the DMP-Z1 was evident. It was with these headphones that I found something wanting – when playing some rock tracks like Bohemian Rhapsody on Queen’s Greatest Hits collection (16/44.1 FLAC rip from CD), there was a slight lack of urgency and energy, especially as Freddie Mercury hits the crescendos.

Switching to the lovely bijou Sony IEMs IER-Z1R (which deserve a review all to themselves), the relaxed and flowing nature of the DMP-Z1 continued to be evident. Also evident was the very low noise floor, so the DMP-Z1 is suitable for sensitive IEMs as well. The Sony IEMs also have a similar profile to the DAP, with a top to bottom cohesion and smoothness which makes for hours of fatigue-free listening. I tried the IER-Z1Rs on both single-ended and balanced outputs, and there was a small but detectable difference – a little more verve and dynamism through the balanced outputs, but not really that much more detail. The IER-Z1Rs have an impressive extension into the sub bass as well as into the upper reaches, and the DMP-Z1 has the ability to showcase this.

Final listening with my own Shure 846s showed a little more energy and dynamism, as I am accustomed to. The Shure’s prodigious bass was evident, but the DMP-Z1 never let it get overblown, and the solidity of the midrange of the 846 was well served. On the same tracks as above, there was definitely a more energetic feel, but the Sony IEMs do have the edge on delicacy in the upper registers.

To note, the Vinyl Processor mode adds a touch of warmth to the sound, but the effect is quite subtle, but in the end I preferred to operate the DMP-Z1 in DSD remastering mode, which like my own HAP-Z1ES, is a smoother and more pleasant listen over all.

Comparison Vs Chord Hugo2 (operating as a USB DAC)
Assessing the DMP-Z1 vs the Chord Hugo2 as USB DACs was very informative. The DMP-Z1 provided a pleasant listen – the easy going nature of the DM-Z1 over the Grado PS1000e made for hours of enjoyable listening. Switching over to the Hugo2, there was a distinct switching of gears. Most evident is the increased urgency and pace, and consequently a more forward delivery. Chord’s proprietary FGPA architecture is evident here – there is an architecture and structure to the soundfield coupled with an ability to dig out detail.

But it isn’t a one way road – the DMP-Z1 edges out the Hugo2 on a number of dimensions, most notably the ability to showcase the ebb and flow of the music in a non-fatiguing way. The DMP-Z1 is a unit you can listen to all day and not be found wanting.

THE LAST WORD
There is no doubting the capability and refinement of Sony’s tour de force DAP – there is almost nothing to want except a little more excitement for certain genres. At this price point, you would expect nothing less than perfection. But I am still scratching my head – at whom is this lovely product aimed? Who would or should purchase this amazing product?

In Sony’s own stables, the NW-WM1Z is a superb player and offers a very similar performance for almost one third the price and is also truly portable. In the Astell & Kern range, the A&Ultima SP1000 offers more functionality, expandability and is also portable in a similarly premium finish. The Cayin N8 which I previously reviewed also offers an amazing amount of functionality and performance at a fraction of the price.

For the dedicated headfi enthusiast, the DMP-Z1 could well be the answer for a home listening experience, but if you do not require the transportability, there are a whole slew of DAC/headphone amp solutions which can possibly match the DMP-Z1.

In the final consideration, I cannot recommend the DMP-Z1 in any way for value for money, but I have to give it full credit for its capability and as an expression of Sony’s engineering prowess. Sony has had a storied history of making statement products such as these and some of these have been iconic – I am sure the DMP-Z1 will be one of these.