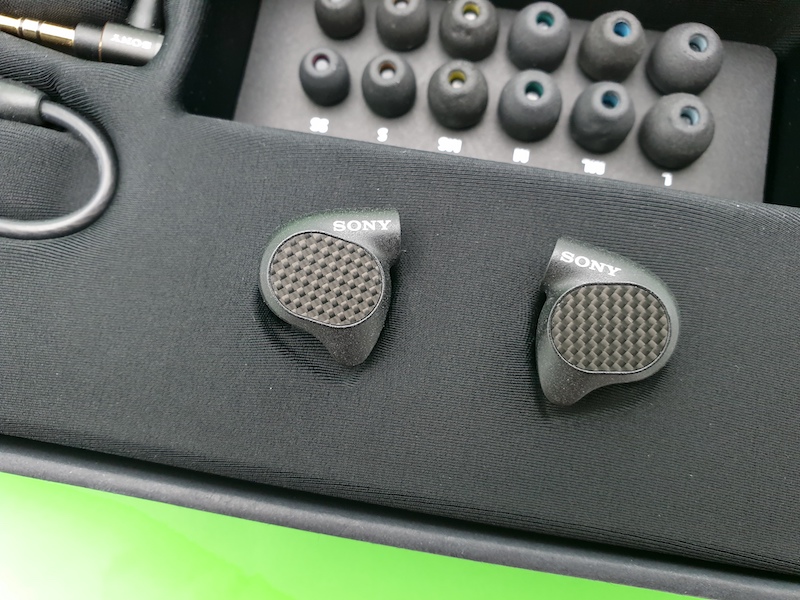 + Sony house sound – even handed, very transparent with good soundstaging and imaging; crystal clear mids and treble – the super tweeter gives an appreciable sweetness and delicacy to the treble, especially on cymbal work; bass is quick, rhythm is well paced; well-rendered timbral textures.
– Overall lacks a little excitement and drive, comes across as a little too polite; better value to be had with other brands of IEMs if you crave a more exciting sound.
Sound: 8/10
Value: 6.5/10

SONY announced a slew of products in August 2018 – most notable were a number of pairs of high-end IEMs to compete with the likes of Shure, FitEar, AKG, Westone, etc. These IEMs represent a step away from the established Sony IEM designs and a move towards a different form factor, and perhaps a slightly different sonic signature.

The IER-M9 features Sony’s preferred technology for IEMs – balanced armature drivers. There are five per side, with the fifth being a super tweeter in addition to the fourth also featured in the cheaper M7.

I do like the look and the finish of the M9s – a precision milled aluminium body with a nice carbon fibre plate to distinguish it from the M7s.

The M9s come in a substantial box, well presented with a travel case, two sets of cables for 3.5mm single-ended TRS connector and 4.4mm balanced TRRS connectors – on the other end are MMCX connectors, with pre-formed ear loops as these are meant to be worn in the classical IEM style, with the cables looped over your ear.

As with all IEMs, it is crucial to get a good fit and seal to exclude noise and get the best engagement from the drivers to your eardrums. With the variety of tips supplied in the box, it was relatively easy to find a good fit and seal – I liked the comfort tips best and used slightly different sizes in the right and left ears.

TESTING
I reviewed the M9s with a variety of sources, ranging from a borrowed Sony NW-WM1A almost-flagship player to test the balanced cable option as well driving it from single-ended sources such as an Onkyo Granbeat DP-CMX1, Astell and Kern Kann and a Chord Mojo DAC/amp paired with a Poly. I also used them with an iPad Mini 4 to test drivability from a standard 3.5mm headphone jack with no audiophile pretensions. I compared them principally with my own pair of Shure 846 IEMs as well as my well-worn pair of Sony XBA-A2s.

Listening took place in quiet situations mostly, though I also did test them in cafes and on a plane to judge their ability to exclude noise.

Music used to test was a variety of high-resolution as well as CD-quality tracks. I did not use them to monitor vinyl playback directly, though I did listen to a number of rips I have made of some of my own vinyl. Genres ranged from classical, to modern Jazz and some pop and rock tracks.

LISTENING
The M9s acquitted themselves well right out of the box – there were no glaring omissions off the bat and as the hours of listening wore on, the M9s qualities came to the fore – a fine sense of timbral texture, good out-of-the-head sound staging and imaging. The bass is ample, though not at the level of those coming from dynamic drivers and doesn’t shake the metaphorical floor.

Switching to Miles Davis’ seminal work Kind of Blue (24/192 FLAC from HDtracks), these timbres were even more evident on individual instruments. In addition, the cymbal work showed how the super tweeter was at work, making the gossamer sounds float in space. Miles’ muted horn also had an additional sweetness, never straying into harshness which can be the case on some IEMs.

Rhythmically, the M9s also did well – on the Great Jazz Trio’s At the Village Vanguard (24/96 FLAC rip from vinyl), Tony Williams’ feathered kick drum was clear to hear and appreciate in his complex drum solos, as was the amazing cymbal and snare work.

Where the M9s come up short are sins of omission. There is a slight lack of energy and projection – the mids are very fine and clear, but lack a little projection. Similarly, although rhythms and vocals are portrayed well, there is a slight lack of energy and dynamics in rock tracks such as Fleetwood Mac’s The Chain and Dreams (24/96 FLAC from HDtracks). As such, the M9s are not quite as engaging as you might want – it’s probably a little too polite for some tastes.

The M9s are not an especially hard IEM to drive, as the unaided 3.5mm socket of an iPad mini 4 was able to drive them to reasonable levels. However, the quality of the sound was not remarkable, indicating that although not power hungry, the M9s do need a good amp to control the five drivers on each side.

Switching to balanced operation yielded a small but significant gain in clarity and drive, especially with the NW-WM1A, where the output of the 4.4mm balanced jack has been optimised. Similar gains were also heard with the Onkyo Granbeat’s balanced jacks to the M9s.

When sealed well, the IEMs exclude noise well in a cafe and on a plane, but do not expect the same sort of hush as from noise-cancelling headphones.

Vs the Shure 846s: The Shure 846s have been around for a while now and represent a benchmark in the price class. Comparing the M9s in the same price class was very instructive, showing the relative strengths and weaknesses of both IEMs. The Shure 846s showed me where the M9s were lacking – the energy and dynamism from the Shures were infectious, drawing you into the music, whilst preserving all the detail in a coherent musical picture. The bass from the Shures was also a lot more solid, providing a firmer foundation for the music as a whole.

Where the M9s shine is a more open midrange and treble, and wider sound staging, showing where the 846s can be a little more congested and closed in.

Vs the Sony XBA-A2s: The A2s are a design pitched much lower in their aspirations. The fact that it is a dynamic/BA hybrid lends it a more bassy character – much more tuned for modern norms. The M9s win in almost all categories, as it should being thrice the price and with more drivers per side. There is a lot more delicacy, the mids are far more open and the bass and bass textures are much more easy to discern. In addition, a far wider soundstage and imaging are apparent. But the A2s win on two points – more bass (if your tastes run to that) and more importantly, a much more engaging and dynamic character.

THE LAST WORD
I am glad to see that an electronics giant such as Sony is still investing into what are niche products, with new designs at price points which make them a nice proposition. As such, Sony is able to provide a complete high-resolution playback solution from the DAP to headphones and IEMs.

In this context, the IER-M9s are a very fine pair of IEMs which showcase the engineering prowess of Sony – the ability to bring such a finely detailed IEM to market. However, there is a slight lack of dynamism and fun to the sound. Paired with the right DAP, this may not be an issue. However, there are many premium IEMs at around the same price point which deserve audition along with the M9s to see what suits your ears best.