Cayin N8 DAP – master of all, jack of none 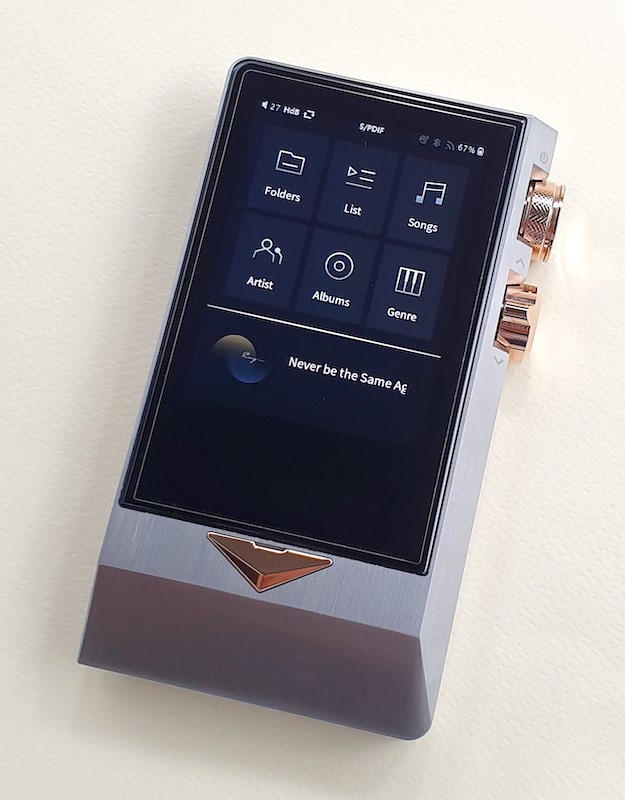 CAYIN has been up to now a notable player in the mi-range digital audio player (DAP) and headphone/DAC market, with great value players at a number of price points. Its products have generated quite a following with the headfi community, especially in Asia.

With the previous N5iiS and N5ii, it was starting to knock on the doors of high end (in performance, if not in price), whilst still offering great value. With the N8, Cayin has without any “ands, ifs or buts” made a bold statement in terms of a flagship DAP, incorporating many of its own ideas. The price also makes clear that Cayin has stepped out of the “value for money” territory, though arguably, what is provided in the player still represents a lot of potential value in terms of technology, connectivity and materials.

The headline feature of the N8 has to be the tube output stage – an honest-to-goodness thermionic emission active element. Of course, it isn’t a tube or pair sticking out of the chassis, but a Korg Nutube “chip” mounted compliantly to minimise microphony.

Equally impressive is the build of the player – a very hefty stainless steel and glass affair with gold-plated knobs which will likely be something you will either like or dislike. Although the overall build quality seems good, I found the knobs to have a rather loose mounting – which never posed any issues, but does not feel as “premium” as it should. A nice touch is the included leather case in the box.

Connectivity is superb – on the digital side, inputs include 128GB of eMMC storage on board, with a MicroSD slot which can take a card of up to 512GB in size. The USB-C input can be configured as a USB DAC, but equally, a USB stick can be plugged in, in OTG mode, as a disk to be accessed for additional storage. But there is no network streaming connectivity unlike the Astell&Kern players, though there is Wi-Fi onboard.

Bluetooth 4.2 is also an input – with LDAC support. On digital outputs, the USB slot again can be configured as SPDIF out on coaxial (with a supplied cable) as well as SPDIF on 3.5mm TRS jack (also supplied) which works well with inputs such as the Chord Mojo or Chord Hugo 2. In addition, there is a mini HDMI port connector which carries I2S (Inter IC Sound) to suitable DACs which have such inputs (note that this is not a HDMI port, merely I2S on a HDMI connector). Bluetooth 4.2 output with LDAC support rounds out the output side.

Analogue inputs are also well specified – single-ended 3.5mm TRS output for a headphones/IEMs, as well as a dedicated 3.5mm TRS for fixed level (2.1V) line out duties. In addition, a 4.4mm TRRRS balanced jack (per JEICA standard, similar to those fitted by Sony on its latest players) is fitted for both variable as well a fixed-line output duties. In the box, two adaptors from 4.4 mm to 2.5mm TRRS balanced jack and another 4.4mm to dual XLR out are supplied for you to use this jack.

In terms of decoding, the N8’s AKM DAC can handle about almost any format and file thrown at it, including PCM decoding up to 32-bit/384kHz and DSD up to quad DSD 11.2 MHz. File formats also run almost the gamut – from lossy formats such as AAC and OGG to various PCM formats and DSD in DSF, DIFF an even ISO (SACD ISO image files). One notable omission is that it does not support MQA files.

The screen is not large nor terribly high-resolution, but wholly unnecessary for a DAP, though it doesn’t exude an entirely premium feel. However, the user interface does have some issues – it is not entirely responsive and although quite simple in approach, some of the design is not entirely intuitive. Here, the fettled Sony and A&K interfaces have a distinct advantage, with smoother and easier operation.

TESTING
It was almost impossible to test the N8 in all the many ways it can be used, so I focused mainly on the most likely ones:

2. With IEMs for home and on-the-go listening.

3. Driving the single-ended line in of an integrated amp.

4. Driving the balanced XLR in on a power amp (using variable outputs).

I did also try it as a USB DAC, but that was only for a very brief period in scenario “4”. I did not test the digital outputs extensively, as I don’t see that as the primary use of this flagship DAP, which has already has on board a very well-engineered DAC. I did confirm that the SPDIF output as well as USB out to drive another DAC works as advertised. I briefly also used the N8 as a Bluetooth receiver from an Android phone with the LDAC codec.

I used a variety of ancillary equipment, but primary were a pair of Focal Elex headphones and Shure 846 IEMs. I also used a PS Audio Sprout 100 as the integrated amp driving Audio Note AN-Es speakers; a Parasound A23 power amp driving Q Acoustics Concept 500s; a pair of Oppo PM-2s to check ability to drive difficult loads; Grado GH-1s for variety. Direct comparisons were to an Astell&Kern Kann, Onkyo Granbeat DP-CMX1 and Chord Hugo 2.

LISTENING
Starting out as a DAP into the Focal Elex open backed headphones – the signature sound of the N8 was clear from the outset, a solid, tonally rich spectrum from the lowest notes to the very top. The Elex is reasonably sensitive, but requires good control to “grip” the large drivers, and the internal amps of the N8 are up to the task.

Of course, tastes vary, but I marginally preferred the trade-offs presented by the solid-state single-ended output over that of the tube output for the most part. Although there is an overall similarity to the tonal profile, the tube/valve output painted a more tonally solid sound with a warmer character but never quite tips over into overly euphonic. On balance, however, I still preferred the cleaner and tad more detailed presentation. However, on poorer recordings, the tube output could well be a saviour.

Referring back to my listening notes, I was struck by the richness of timbres on Miles Davis’ Kind of Blue especially on So What and Blue in Green (single DSD rip) – the slight warmth of presentation and richness fleshes out the sparse “soundstage” and gives the instruments body and volume. This was also reflected in orchestral selections (Daniel Barenboim – Beethoven for All, 3rd Symphony, Decca 4783511 CD rip 16/44.1), where the wide sound-staging and rich timbral textures were evident and painted a very believable and enjoyable rendition.

Switching to the Shure 846 IEMs, a similar rendition was evident – the solid state output was preferable given the sensitivity of the IEMs, hiss was much less perceptible. Again, the control of the output amps was evident in managing the four drivers in each IEM. Bass was well controlled, evident on The Eagles’ Hell Freezes Over (XRCD rip 16/44.1) – the drum hits on the opening of Hotel California had both force and control. Moving onto Dire Straits’ Money for Nothing (single DSD SACD rip), the slightly warm tonal balance made for very pleasant listening, with good weight and acoustic mass in the multi-layered production, never straying into harshness or exhibiting any midrange glare.

Of note – it is worth experimenting with the two output modes P and P+ which are meant to match impedance of your headphones as well as the three gain settings to see which suit your IEMs and headphones. There are subtle changes of presentation which may help balance the profile for you. There is also a built in parametric EQ, but I did not use this as I prefer to review equipment without the additional variables like tone controls. However, I have no doubt that this may well be a useful feature for some.

Switching gears again, I was keen to see how the DAP would fare driving a speaker setup – a more modest one first via its single-ended line outputs. The amplification was a PS Audio Sprout driving Audio AN-Es. The signature of the DAP was obvious again, putting out a nicely rich rendition of Getz/Gilberto (FLAC 24/88.2) with a relaxed lope to the rhythm section and a lovely sweetness to Stan Getz’s saxophone. The sound-staging was also evident through the speakers, showing a nice dimensionality out of the Audio-Notes, grounded by the aural density around Gilberto’s voice and each of the instruments.

To test the balanced output, I pressed the 4.4mm TRRRS to twin XLR output cable into service, this time in variable output mode into my Parasound A23 power amp driving a pair of Q Acoustics Concept 500 floorstanding speakers. In this set up, the N8 can go toe-to-toe with the Hugo 2 as a DAC in USB mode (connected to the Parasound in single-ended mode). It is a question of choice if you prefer a more incisive and insightful presentation of the Hugo 2 vs the warmer and more relaxed presentation from the N8. Through the Concept 500s, the size of the sound-stage was even more evident – on replaying Beethoven’s 3rd Symphony by Daniel Barenboim above, this was driven home. The first movement was staged with great precision and size and the music had a great sense of ebb and flow between sections of the orchestra.

My final listening notes show that over the LDAC codec, the N8 makes for a great Bluetooth receiver from an Android phone to allow you access to streaming services. There is a slight loss in transparency, but this is very slight in most cases and makes for enjoyable listening especially from compressed streams such as Spotify.

COMPARISONS
vs Astell&Kern Kann
Not surprisingly, the N8 outclasses the Kann on almost all dimensions; being thrice the price, it sits on a different plane of existence. Still, the Kann is enjoyable, just not a fluid or as rich in its tonal palette with a drier presentation.

vs Onkyo Granbeat DP-CMX-1
Onkyo’s smartphone/DAP has always shown an ability to punch above its weight and compared to the N8, it holds its head up high, showing a little more finesse in the mids and highs, especially with MQA encoded files. However, the N8 trumps the Granbeat handily in timbral richness and aural density.

vs Chord Hugo 2 (operating as a DAC)
Where the N8 gives up a little to the Hugo 2 is in agility and pacing – the Chord offers superior dynamics and insight to the structure of the music, albeit with a much less euphonic glow. As such, the N8 is much more forgiving of poor recordings.

THE LAST WORD
The N8 represents a true statement product from Cayin, and stakes out a claim in the hallowed company of high end DAPs. It does so with a very comfortable tonal profile which presents plenty of detail in the context of a rich tonal palette and scale of presentation. The novelty of the tube output, coupled with impedance matching and gain levels give the player an ability to tailor its sound to your choice of transducers, without resorting to EQ (which is also available if needed).

The flexibility it has in terms of digital and analogue connectivity allow you to use this in many situations, but its strength is still as a DAP and in this regard it excels. However, the underlying user interface is not as slick as some of its flagship competitors and could still do with further refinement.

In terms of value for money – I have to hold back a little as a flagship player like this manifests value in different ways for different people. There are ways to get similar performance for cheaper, but not in a single box or with such flexibility.

Recommended with some caveats: the user interface and slightly wobbly knobs.