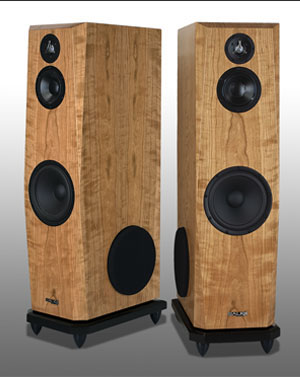 COMPANIES operating on a direct-sale model often provide excellent value in their products by virtue of eliminating the middleman. One such outfit is Michigan-based Salk Signature Sound, founded in 2002 by Jim Salk. Apart from using high quality components in his products, Salk also offers “almost limitless finish options.”

The latest in the Salk Sound range is ready for you now – the SS9.5, which garnered much praise at the recent AXPONA show in Chicago. It is touted as an “uncompromising speaker design” that is “affordable and with high performance.”

The floorstanding SS9.5, a three-way, acoustic-suspension design, is the new flagship of the SS line. According to the press release, “for accurate, low distortion treble response, the speaker uses an SB Acoustics Satori beryllium dome tweeter.”

“With the phenomenal success of our Song3 BeAT model, we decided it was time to marry Satori’s phenomenal beryllium creation with AudioTechnology’s outstanding mid for a new flagship model.”

The speaker has a nominal impedance of six ohms and 86dB sensitivity, so minimum power of 150 watts per channel is required. Frequency response is quoted at 25Hz to 40kHz.

A pair of SS9.5 speakers will cost you US$9,995 for the standard curly maple, curly cherry, curly walnut, oak, straight mahogany and satin black finishes. Custom colours and dyed finishes are also available as options, as are crossover component and bi-wiring upgrades. Get to the Salk Sound website to read more.