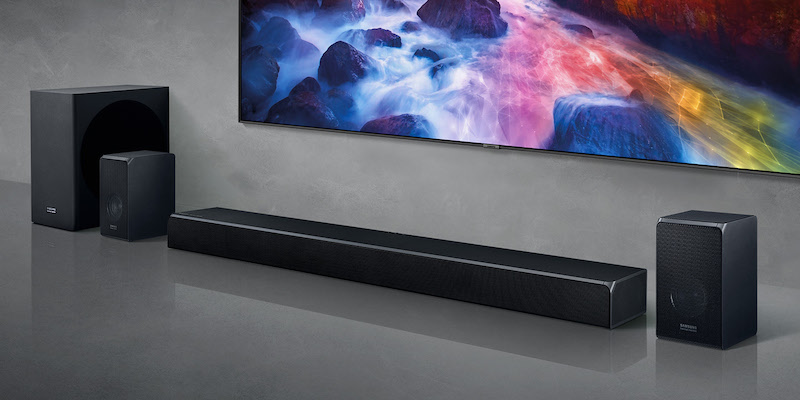 SOUNDBARS aren’t the compromise they used to be years ago; today’s models are vastly more satisfying sonically and better equipped than their predecessors from even half a decade ago. And Samsung has just released four new models to keep punters interested in the format.

According to the Samsung press release, “The new Q-Series soundbars carry a sound quality that has been revitalised by experts and feature designs that offer an appealing home aesthetic to create a more superior home theatre experience for movie and audio buffs.

“The Adaptive Sound feature in our Q-Series soundbars understands the different sound settings and optimises them according to the scene so that listeners can enjoy even more realistic sound for every genre of content.”

The HW-Q70R and HW-Q60R soundbars “can analyse content played on a viewer’s TV and adjust to ideal sound settings for any given scene… both will automatically switch to adaptive sound mode when a Samsung 2019 QLED TV is connected and its AI mode is switched on.”

The onboard Acoustic Beam technology uses “an array of holes in the speaker to create a more dynamic, panoramic soundscape to fill every corner of the room.”

The HW-Q70R also has Dolby Atmos and DTS:X, previously available only in the high-end models.

“This allows these two soundbars to generate sound that moves around the listener, making the audio come from around and above.”

“To make the set-up of your TV and soundbar more convenient and wire-free, the HW-Q90R and HW-Q80R feature wireless connectivity to your Samsung TV via Wi-Fi, eliminating additional need for cluttered cables. These sound bars can also be controlled with your Samsung TV remote as well, which means fewer remote controllers around the living room.”

Also, “with 4K and HDR 10+ capabilities, high quality video sources can be connected through your soundbar to your Samsung TV. Additionally, the Game Mode Pro optimises sound specifically for gaming, allowing gamers to fully immerse themselves in a whole new reality of interactive entertainment.”