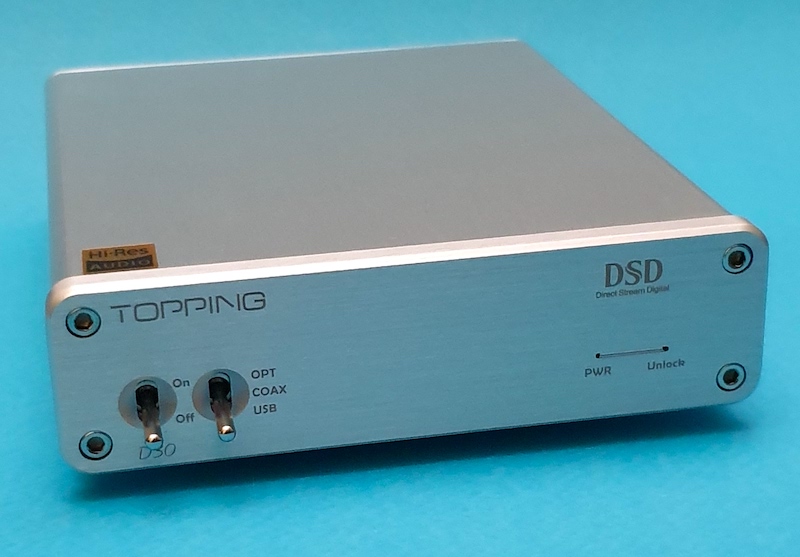 + Small footprint; good build quality; relatively neutral sound presentation depending on what you compare it with; DSD support.
– Soundstage and imaging could be improved; nothing much at this price point.
Sound: 7/10
Value: 8.5/10

TOPPING has made a name for itself as an affordable and good brand for audio equipment, being compared with the likes of Schiit’s entry-level models like the Magni and Modi. On the testing bench today is the China-made Topping D30, a unit which I personally think deserves a place in your shopping list when it comes to fun and cheap DACs.

I’ve always been satisfied with most equipment when it comes to casual listening. My phone, a Vivo X21, is good enough for me to notice the difference between Spotify Premium and Tidal HiFi while the workhorse laptop that I lug around for both work and home use sounds good enough for me through my Final Audio Pandora Hope VI headphones.

For those times when you need a little extra clarity and imaging, you can’t go wrong with entry-level components. Casual listeners and budding audiophiles often face the difficult choice of picking out the best bang-for-buck components, trying to balance the scales between price and performance. The D30 certainly is a worthy DAC for those starting from scratch.

The unit feels good in the hand and looks nifty on the table. Its diminutive size (12 x 4 x 18cm) allows you to place it on your work desk with a small amp – probably pairing it up with the companion A30 amplifier, without taking too much space. The machined aluminium faceplate sports two toggle switches for power and source selection.

At the back is a myriad of digital inputs and a pair of RCA line level outputs. The unit is powered by a 15V power adapter, which to me is a little strange considering how most equipment uses 12V. No complaints, however, since the designers know their product best.

For its price, the D30 packs some punch. DSD support is up to DSD128 with DSD over PCM (DoP) while PCM is supported up to 24-bit/192kHz. All of this is processed by the Cirrus Logic CS4398 DAC chip which although a little dated, does its job, and does it well.

SETTING UP
The unit arrived in a box with the essential USB cable, power adaptor, user manual and warranty information. It didn’t come with a USB stick containing the driver, and the support website was also down.

I plugged it into my laptop regardless, and no surprise that the unit worked fine out of the box. Windows detected it as an external audio device and after a few seconds of configuration, it was already making music. The DAC was connected to both my headphone and speaker set-up for thorough testing.

Through foobar2000 and JRiver Media Center, the D30 played every supported file format as intended, just as it did with Tidal and Spotify. One small note – I already have the Asio plugin installed on my foobar2000 to enable DSD playback, even though it can already play DSD with DoP.

If all these sound a little overwhelming to those venturing to get their first DAC, don’t be discouraged! There’s a little learning curve that comes with every component and it is definitely worthwhile.

LISTENING
As a budget mini desktop DAC, the Topping D30 fits the bill. It is able to produce a faithful representation of the music without imparting too much of its own sound. At the same time, there’s also nothing that particularly stands out from its output.

A small litmus test I did was the same track I’ve used in the previous reviews – Regina Spektor’s The Prayer of François Villon. The song is slow and emotional without too many instruments fighting each other to take the centre stage as it belongs to the singer’s powerful vocals. The D30 handled this well and I was pleased with how it resolved the vocal crescendo in the second half of the song.

Another track I love using is Tchaikovsky’s 1812 Overture in its full entirety, played by the New York Philharmonic Orchestra. Here, the D30 lags a little when it comes to resolution where you can hear the brass section slightly coagulating. There’s adequate air between instruments but the soundstage they are sitting in is not as wide as I am used to. Surely this is nothing to be embarrassed about considering the hardware it is sporting.

Pop and rock sounded toe-tappingly good from the D30. I found no fault to mention when playing the likes of Billie Eilish, Lady Gaga, Ed Sheeran, Sam Smith and others. The bass on Break Up With Your Girlfriend, I’m Bored by Ariana Grande sounded full and went low, while the instrumental shimmer in Normani’s part for Dancing With a Stranger had a nice sparkle to it.

After playing several prog-rock albums by Pink Floyd, Alan Parsons Project and Electric Light Orchestra, the D30 came out a winner. The clean and neutral presentation rendered drums and guitars well. I noticed a flatter, less 3D presentation when it came to instrument layering and imaging – a small caveat naturally present in lower-end DACs.

I tested the optical input through a friend’s old 13-inch MacBook Pro and the sound was largely the same. If there were differences, they were just too small for me to notice, although I do know some people who prefer optical over USB for the former’s electrical isolation.

THE LAST WORD
The D30 certainly isn’t a slouch despite the caveats I’ve highlighted. From its ease of use to the sound it outputs, it is clear this product is targeted at those looking to get their first DAC.

For a small, fun source, it’s doing well for itself and is able to stand its ground.