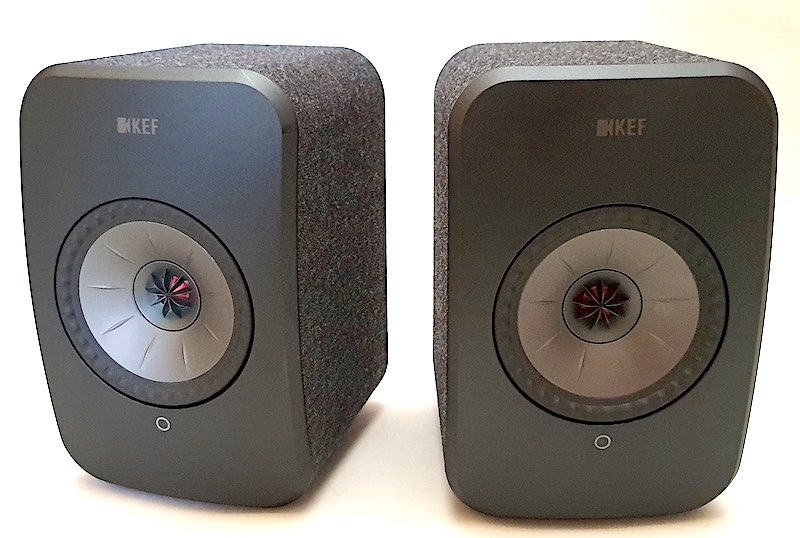 KEF has been on a roll lately with its latest ranges of premium bookshelves and floorstanders. Recently branching out to active speakers, first with computer monitors such as the Egg, KEF scored a huge hit in turning its legendary LS50 bookshelves into active speakers in the form of the LS50 Wireless (LS50W). In fact, I owned both the LS50 passives as well as the LS50W and can vouch for their superb performance.

Not resting on its laurels, KEF has turned its new active speaker expertise to a smaller pair of speakers in the from of the LSX. Looking very much like a shrunken version of the LS50W, the new speakers come in a fetching assortment of colours with lovely fabric finishes on the sides and back. The exception is the white speaker which has a glossy piano finish.

KEF’s signature UniQ driver (four-inch mid/bass) sits in the middle with an aluminium anodised finish to match the exterior and a contrasting colour for the inset 19mm co-axial tweeter with the “tangerine segment” waveguides.

The speakers come with an IR remote, though it is generally better operated via the KEF apps. Also in the box are two cloverleaf “laptop” power cables (not IEC) terminated with Euro plugs. There is shielded Cat 6 cable which acts as an umbilical between the master speaker and the slave to pass 24-bit/96kHz data; the speakers can also communicate wirelessly with each other, but at a maximum of 24/48. This is already one step up from the LS50W which required the umbilical at all times. No grilles are supplied with the speakers.

The speaker has great connectivity – via the network (Wireless or wired Ethernet), the speaker streams via its own app (KEF Stream) not only from TIDAL, but also Spotify Connect, DLNA servers on your network, Apple Airplay 2 and also Roon, my preferred way to stream. There is also an optical Toslink digital input good to up to 24/96 and an analogue 3.5mm stereo minijack input.

SETTING UP
Simple enough – I had to reset the speaker as it was a review sample and using the KEF control app, the speaker was logged into my home Wi-Fi network. I left the speaker tweaking settings to the defaults for my size of room – there is a lot of room for adjustments to match your room size, placement (on stand in free space, near a wall, or on a desk) and also settings for the subwoofer and relative treble and bass output – all of which are subtle in nature, but may well be just the ticket to match your listening situation.

Inside each enclosure, the two-way UniQ driver is driven by two Class D amplifiers – 30W for the tweeter and 70W for the mid/bass driver. There is also a sophisticated DSP termed by KEF as the Music Integrity Engine before each amplifier to time/phase align the drivers and perform the crossover. This is an ongoing development of the one in the LS50W, in which it really lifted the performance of the already stellar LS50.

Testing was done in three settings:

LISTENING
As standalone speakers:
Taking my resident LS3/5as off their stands and putting the LSX on top of my ISOAcoustics ISOL8rs on top of the stands, the LSX seemed impossibly small and alone perched 36 inches high. But once they were set up for free space and playing music, they magically disappear. All the old tropes for “out of the box” sound came to mind.

A wide and expansive soundstage is painted with plenty of layering and depth. The solidity of the imaging was stunning (though their bigger brothers do this even better). Although these speakers cannot circumvent the laws of physics, the bass was present and correct from 50Hz up and only for certain tracks was there an obvious lack of the bottom octaves. The traditional UniQ strengths of midrange projection, phase coherence, imaging and soundstaging were there, along with a very dynamic and quick bass, even if not entirely as deep as you might want.

Looking back on my listening notes on tracks I know best on a variety of systems, I noted that cymbal textures on Sunday at the Village Vanguard (Single DSD rip from Analogue Productions SACD) were particularly well painted. In the same vein, Miles Davis’ trumpet on a mono mix of Kind of Blue (24/192 FLAC file from HDtracks) had the right level of brightness without any stridency. Also remarkable was the LSX’s ability to layer in depth the mono mix, projecting the instruments at different “distances” from the listener and also even suggested some “width” to the mono mix. I would note that streaming 24/192 files did sometimes have some dropouts over Wi-Fi, but on wired Internet, streaming was solid.

Switching to rock and pop, the LSX offered up a nicely upbeat rendition of Sting’s Ten Summoner’s Tales (16/44.1 CD Rip from a 1990s UK pressing), with the rhythm and pacing bang on the mark, no doubt aided by the Music Integrity Engine. After switching off the phase correction setting, the precision of the rhythm and imaging suffered subtly.

My final notes from listening to some classical selections (TIDAL MQA stream of Karajan’s 1963 Beethoven Symphonies) – the speakers conjure up a wide and expansive soundstage, but struggle a little to fill out the instruments fully. Also limited is their ability to really go loud – the speakers will achieve a reasonable loudness in a medium size room, but pushing them beyond 80 on the volume scale tends to make them sound a bit glassy and harsh.

Referring back to my reference Q Acoustics Concept 500 floorstanders, the sense of solidity and scale is a little lacking with the LSX, but to their credit, I was using them in a way which was probably testing their limits.

At which point, I connected my REL T5 subwoofer to the sub output on the LSX and made the adjustments to the EQ and crossover accordingly. The adjustments allowed for a very good match to the subwoofer and as such, the sound opened out – and became a tad warmer as bass fills out a little. Scale and dimensionality improved too as a result. Hannah Reid’s voice on London Grammar’s If You Wait (24/48 FLAC file from HDTracks) was palpable and the subwoofer offered more acoustic weight to the instrumentation.

As computer speakers:
Sited 1.2m apart on either side of my computer and adjusting the KEF control setting for a desk placement, the LSXs came into their own. As nearfield monitors, the KEFs paint a superbly precise soundstage, albeit on a smaller scale. The sense of depth also is remarkable, with instruments seemingly behind the display of my computer, and vocals projected in front of this plane.

At a distance of about 1-1.5m, the LSXs gel beautifully – there is no need to have them operate at higher volume levels and perceptually, the bass is fully articulated and balanced once the EQ is set up for a desk location.
Connecting the speaker via the TOSlink input works well, especially as the computer can control the volume.

In this setting, connecting a DAP to the 3.5mm analogue input was instructive as well – the ADC is very transparent to the source, showing the ability to render the audio characteristics of the DAP.

Finally, using them with Bluetooth streaming showed that the speakers still have a fundamental “rightness” to them, albeit losing a little transparency and detail when transmitted over the compressed Bluetooth protocol, but nothing which would preclude very pleasant casual listening.

Note: In this setting, I had some dropout issues on the slave speaker with the cable-less mode to link both speakers, even though they were only 1.5m apart, but when I used them as TV speakers, there were no such issues.

As a TV soundbar:
I also briefly auditioned the LSX as a “soundbar” using the optical input from my TV. They were sited about 2.2m apart, on an open shelf, and about 10cm from a wall. I selected the recommended settings for this sort of location.

Once again, the fundamentals of the sound were correct, with a very strong central image for voices, whilst the effects of movies were well rendered. I enjoyed watching The Avengers as well as Jurassic Park, and although there was no rumbling extended sub-bass, all else was present and correct. I would only point out one foible – the speakers do not auto sense a signal from the optical input, so you need to turn them on separately, and thus supplied IR remote is essential to adjust the volume and to turn on the speakers.

Comparisons
vs KEF LS50 Wireless
The LSXs are definitely cut from the same cloth as the LS50W – the phase coherence, speed and imaging are common traits across KEF’s premium UniQ speakers. But there is definitely a difference in the solidity and aural density – the LS50Ws definitely paint a more solid picture, with a slightly larger scale.

But the LSX win on usability – as a nearfield monitor, the LSX “gel” better than the LS50W at very nearfield use. Also, the streaming/control on the LSX is much improved, with much easier switching between network streaming sources, powering up from sleep automatically when prompted by Spotify Connect or Roon.

I would consider where you would site the speakers and how you would principally use them to decide between the LS50W and the LSX.

vs Dali Callisto 2C
Recalling my notes from reviewing the Dali Callistos, the Dalis definitely have a much fuller and meatier aural signature. Much like the comparison I made between the Dalis and the LS50W, the same basic differences lie here, but more exaggerated. The LSX have a precision which the Dalis do not, but the Dalis are a much bigger and therefore “fuller” sounding. That said, I would not welcome the Dalis on my desk, nor would they project as coherent a soundfield at desk-side monitor distances.

THE LAST WORD
KEF has another winner here in my books – building on its successes, the company has been bold enough to branch out further with the LSX and has come up with a compelling small active speaker which will suit modern streaming users, especially in smaller rooms or as computer speakers.

The only issues I would point out would be that streaming performance at 24/192 over Wi-Fi was not trouble-free and the wireless link between the two speakers can also suffer in “noisy Wi-Fi” environments.

But if space allows and if there is a larger room to be filled, I would also audition its bigger brother, the KEF LS50 Wireless, which offers greater extension in the bass and greater scale and presence.