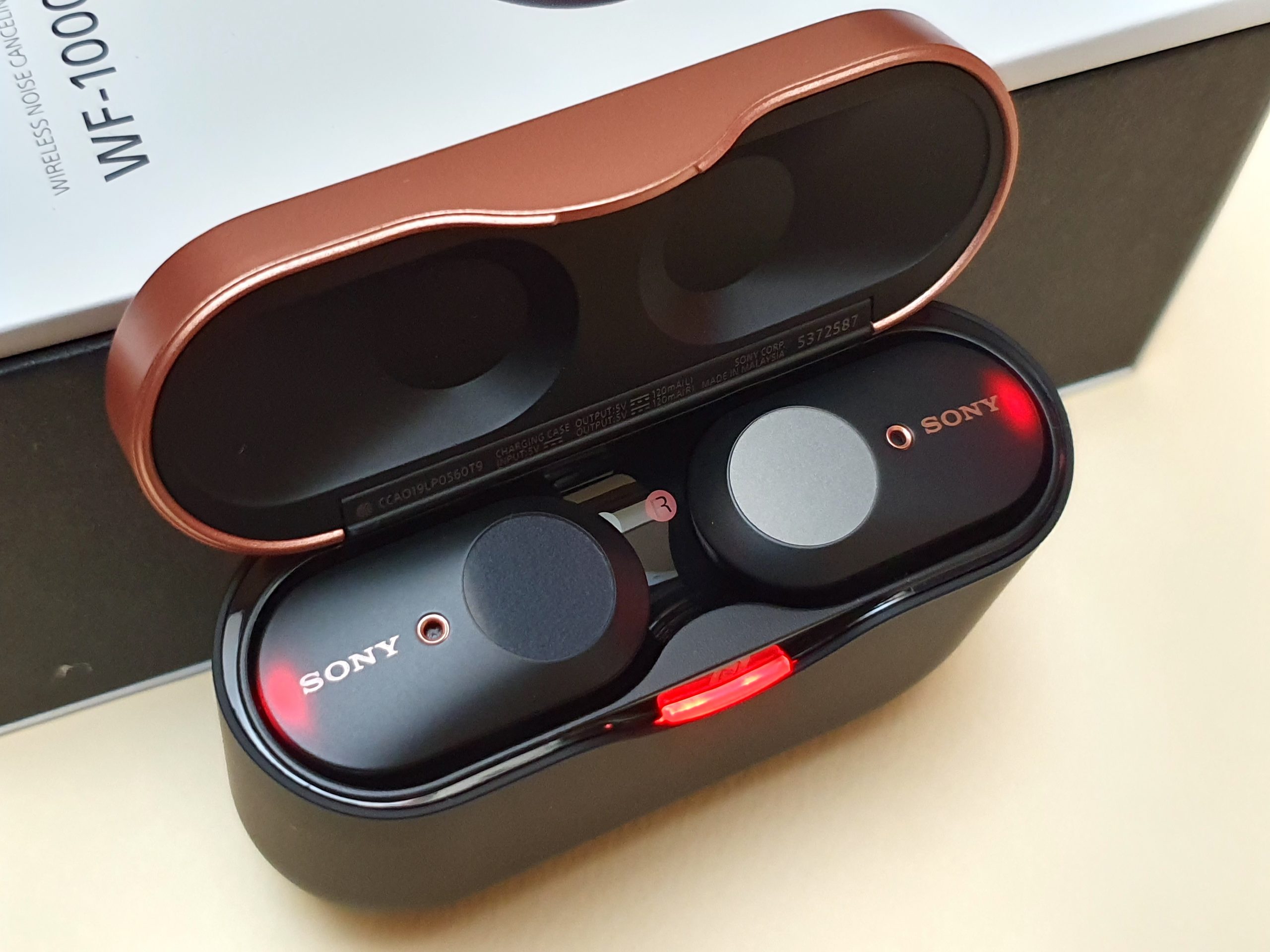 Starting off with the looks, the WF-1000XM3 is an exceptionally beautiful pair of TWS earphones. The pebble shape comes in a mixture of a matte/mirror finish, with the glass circles serving as touch-pads for navigation. Whether in white or black, I am confident you will like both and the choice would come down to personal preference.

The charging case is comparatively large but easy to operate single-handedly. There’s a single sliver of red notification light in the middle of the seam, and it was designed to allow a wide viewing angle.

I found that I could easily get past five hours between charging the earpieces, and the case provides three full charges before requiring a charge itself. When it needs a charge, the LED light will blink to let you know. The case’s LED indicator is extremely basic without even a battery indicator, but the basic ends here.

From the box, the WF-1000XM3 comes with an array of ear-tips to get that perfect fit and seal for your ears, and a perfect seal is definitely what you need for enjoyment. I tried all the provided silicone and foam ear-tips, ranging from the smallest to the largest, and found the medium silicone fitted me best.

The WF-1000XM3 itself comes with all sorts of bells and whistles. For starters, each earpiece has a microphone that points outward to pick up ambient sound, feeding it to the QN1e noise-canceling chip. This implementation lets you choose between “Ambient” mode – where you can hear and be aware of your surroundings – and “Active Noise Cancelling”. To cycle between the two modes or turn off the ambient sound control, you tap the left touchpad. Touching and holding it will turn on the Ambient mode while lowering the volume so you can have a conversation with your earphones on.

Each earpiece also has an inward proximity sensor that detects whether they are seated in your ears or not. It’s a simple device so just touching the sensors could fool them, but they work very well. Taking one earpiece out of your ear pauses, and returning it resumes playback. You can also tap the right touchpad once to play/pause, twice to skip next and thrice to skip back. What is unfortunate, though, is there’s no way to change the volume using the touch-pads, you will need to use your device volume control.

They can also work separately by just picking out the one you want to use from the case. Each earpiece connects to your device individually, and they will communicate with each other for synchronisation.

Sony also provides a companion app for both Android and iOS called Headphone. The app allows you to change the Ambient mode and volume, and includes an equalisation curve. It also tracks whether you’re sitting still or moving, to adapt with the Ambient mode.

One thing to note is that the WF-1000XM3 does not have any IP rating whatsoever, and so isn’t water-resistant. You could maybe get away with some light work out in the gym or a little drizzle of light rain, but the risk of getting water in is on you.

LISTENING/IN USE
The companion app sounds like a good idea, but in actual usage, is not so. It randomly lowers the volume down to almost 25% sometimes after initial pairing, and the in-app volume is independent to your phone’s volume. There’s a noticeable lag when switching between the Ambient modes, so that it’s a lot easier to just tap the left touchpad.

Pairing them is very easy, touch both of the pads for seven seconds and the left earpiece will tell you that they are in pairing mode. From there, just choose WF-1000XM3 from your device and you’re already on your way.

The sound is a commendable feat. I’ve always considered TWS earphones as something you’d only slap on when you need some music playing in the background as there would be so many things needed to get “right” in such a small package for them to sound as good as a decent in-ear monitor (IEM).

The WF-1000XM3 definitely proved me wrong as every track I threw at them sounded surprisingly decent. For instant, Mombasa by Hans Zimmer from the movie Inception, demands a good grasp of bass control to be rendered well. Not necessarily deep, but control, as the complex bass lines could easily bleed into the midrange through some earphones. The Sonys breezed through the track and all was well in the world of Inception.

With every big band and jazz tune that I played, the WF-1000XM3 exhibited much of Sony’s ample soundstage just like its bigger brother, the WH-1000XM3. Between the Sony and the Hifiman TWS600, the soundstage from the latter is comparably slightly larger but it could be attributed to their heightened upper midrange energy. Miles Davis’ Kind of Blue is enjoyable and certainly put in the limelight due to the Sony’s correct tonality.

Answering calls with the WF-1000XM3 was fine – there is no apparent or obvious sound degradation with the active noise cancelling turned on, although in heavily noise-polluted environments, the lower mids and bass definition are sacrificed. With the ambient mode off, there is also no hissing or noise to speak of, or at least, I haven’t been anywhere quiet enough to hear any white noise.

In daily use, I wore them a lot while walking to and from the parking lot, crossing busy roads and standing in a large crowd of pedestrians at road-crossing areas. The noise was heavily suppressed and I was able to play my music at low levels – just the way I like it. In the office, I found myself putting them on with no music playing as they were very effective at silencing the noise from the centralised air-conditioning – a constant noise I had not noticed prior to having the WF-1000XM3.

I’ve even worn them to sleep on several occasions, seeing how I live beside a busy street. The noise-cancelling mode kept my room and road noise down, only allowing the random but odd higher pitched sounds. I wouldn’t recommend wearing them to sleep, however, as they stick out a lot more than the smaller TWS600 or even the larger wireless earbuds from Jabra, the Elite 65t.

I also paired them with several other devices from Apple, Windows, iOS and Android; each paired with no issues and connection stayed perfectly stable.

THE LAST WORD
If it isn’t already apparent, the Sony WF-1000XM3 checked all of my boxes. Some bugs on the phone app could be improved in future updates, and they work just as fine without the companion app.

TWS earphones are hard to be done right, and Sony has struck gold with the third-generation earphones. The accurate tonality and very consumer-friendly tuning will certainly be liked by most users who are looking at TWS. The price might seem too steep to some, but others will view as an investment instead of an expenditure.