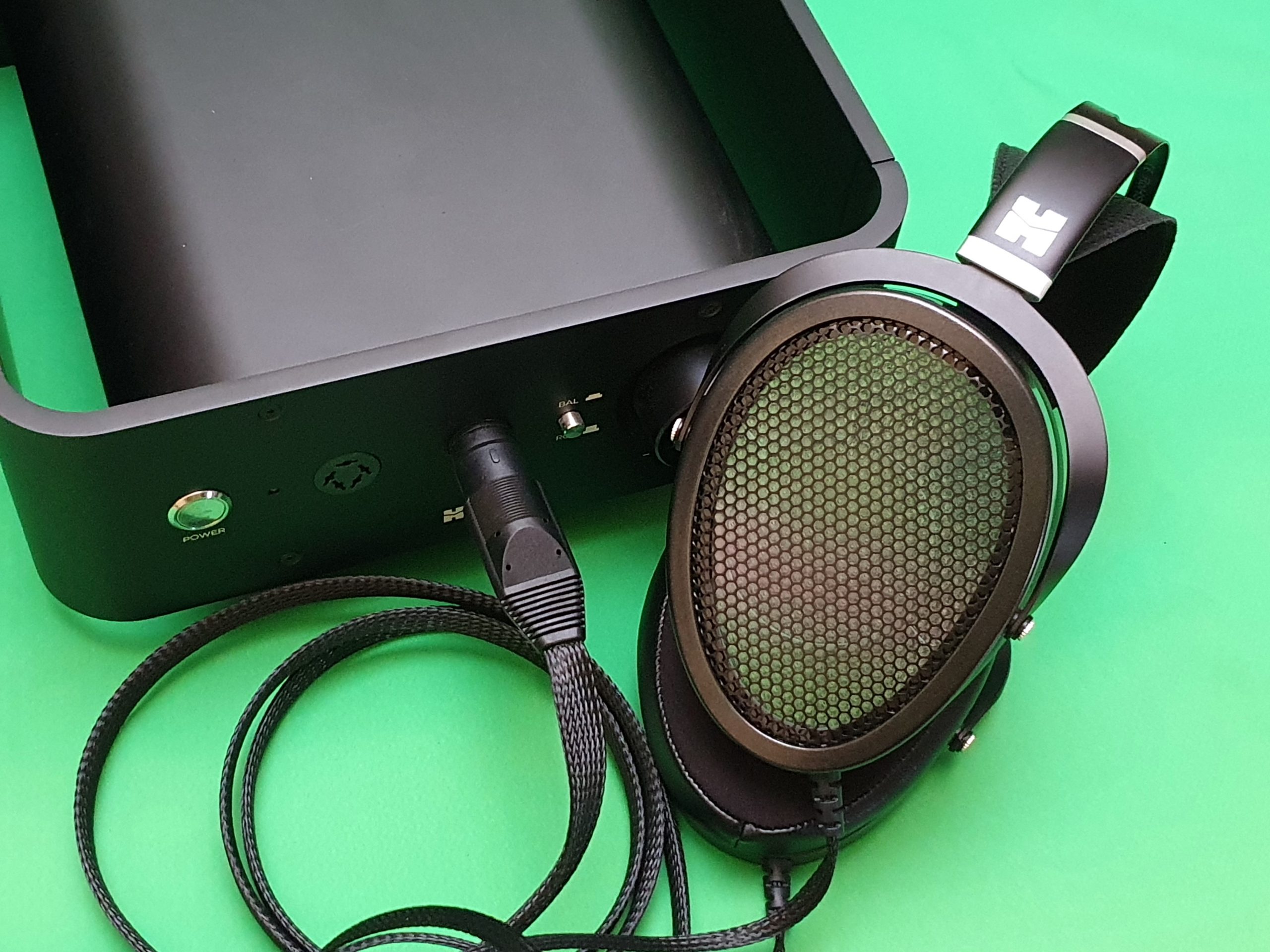 + Superb top-to-bottom cohesive sound – a very even-handed tone with great instrumental texture rendition; great transparency and airiness, only bettered by more expensive electrostatics; fantastic detail retrieval and timbral texturing.
– Bass is sufficient, but this is not a headphone for bass-heads and for bass-led music; energiser can come off as a bit “dry” and “grey”; cannot be used on-the-go at all; can be a little laidback for some tastes.
Sound: 8.5/10
Value: 8/10

HIFIMAN is best known for its planar magnetic headphones, and I reviewed the lovely HE1000se premium planar magnetic model for this site recently. But HiFiMan has also been active in developing and promoting electrostatic headphone technology. Indeed, Dr Fang Bian has made electrostatics his statement piece with the US$50,000 Shangri-La and the slightly more affordable Shangri-La Jr. But the journey started with more prosaic electrostatics – the erstwhile Jade. These Jade IIs are the update to that well-received pair and promise to make worthwhile improvements.

I was very keen indeed to review this pair as a reintroduction to electrostatics, as a former owner of a pair of Stax Gammas back in the 1990s. I loved those headphones, even though they were not the most practical, but for someone living in tight quarters in that time, it was a great way to get into high-end sound without the need for a lot of space.

The Jade IIs are an unassuming pair of headphones, with a quality finish, though not to the standard of the HE1000se, which have a more premium choice of materials. Most eye-catching are the iridescent colours of the super-thin driver membrane which shimmer in the light. The headphones themselves are light on the head and the clamping force was adequate. The captive cable has a flat, ribbon-like construction and is flexible enough, though it is necessarily not as easy to manoeuvre as conventional headphone cable.

The supplied matching energiser (amplifier) is quite the opposite – quite large and solidly constructed, with nicely chosen switch-ware and sockets. There are two sets of inputs, balanced XLR as well as single-ended RCA, and a toggle switch to choose between the two. Two energiser outputs and a volume knob are provided on the front. This is strictly an analogue affair, with no built-in DACs and digital inputs.

The size of the ear cavities should suit almost all ear shapes and sizes, and comfort was well preserved over long listening sessions – I did not feel any build-up of heat or discomfort, which I have felt with some other over-ear headphones.

Being open-back and very much so, there is absolutely no sound isolation from the outside – these have to be used in a quiet and isolated situation. The size of the drivers also makes it very leaky – the sound from these headphones will be easily audible to anyone else in a normal-sized quiet room.

TESTING
Testing was done with a few sources acting as line-level, though I also used some of them as reference headphone amps for my own headphones.

I compared these headphones with my own Grado GH-1s, Oppo PM-2s and Focal Elexs. As I had the HE1000se on review at the same time, I auditioned the other HiFiMAN headphones with many of the same tracks. For the dynamic and planar magnetic headphones, I principally compared them by using the Hugo2 to drive them directly in single-ended mode through its quarter-inch TRS jack output.

LISTENING
I started out with the energiser driven by the Hugo2 in single-ended mode. And my first port of call for headphones is Macy Gray’s Stripped (HDTracks 24/96 FLAC) – the Chesky Binaural+ recording is one of the best I find to test how well headphones image and project a “out of the head” soundfield.

As might be expected from a electrostatic headphone, the ambiance retrieval was excellent, and on the binaural recording, this resulted in a very airy rendition of the album, with plenty of cues to place the performers. Timbral textures were also very well rendered on this acoustic recording – the purity of the unprocessed binaural recording was evident.

On Camille Thurman’s Inside the Moment (24/96 HDTracks FLAC), another Binaural+ live recording, this ambience retrieval was sublime, with the ability to listen to her move from where she plays her saxophone to where she sings (two different locations so that the balance of the recording is correct!). Drum skin hits and textures have superb resonance and you can almost do the audiophile thing of knowing where on the skin the drum was struck.

On the track Noise in the Attic on the album Like Someone in Love by Art Blakey and The Jazz Messengers (Tidal 44/16 FLAC stream), the opening drum solo is electric – the cymbal textures are fantastic with the hi-hat shimmering beautifully – more so than with the HE1000se, which was also excellent.

To test the quality of its bass, I went to my London Grammar tracks – which have strong bass underpinnings with vocals and other instruments layered on top. The even tonality was very evident, and the ability of the Jade II to separate out the instruments and Hannah Reid’s vocals was impressive. However, the quantity of bass was a little low – there wasn’t quite the impressive mass of solid bass which you would like, but what was there was nimble and well textured.

I then switched to the Oppo HA-1 as a DAC with balanced outputs to see if a balanced connection would yield any gains. On the same tracks as above, there wasn’t a big leap in transparency or dynamics. In fact, the inherent dynamism of the Hugo2 was more likeable to me than any perceived gains from balanced operations.

If I were to compare the differences, the highs and mids from the Hugo2 shone out above the HA-1. On the other hand, I thought that the bass quantity and the additional warmth from the HA-1 gave the Jade II an easier listening quality – something that might suit some tastes.

I finally rounded out a quick exploration with the Creative Technologies Super X-Fi portable DAC driving the Jade II’s single-ended inputs to explore the capabilities of these transducers when fed Dolby Atmos and 360 Reality Audio. In quick succession, I went through a number of albums: Dave Brubeck’s Time Out in 360 Reality Audio (Tidal Streaming) was well rendered – the ability to render the micro contrasts and timbral textures makes these technologies more effective.

I also auditioned Kenny Dorham’s Una Mas in Dolby Atmos (Tidal Streaming), and the surround effect was well rendered and enjoyable. Most striking was the ability to render “height” effects – there was a recognisable placement of instruments above the listener in the mix.

COMPARISONS
vs Oppo PM2s
The Oppo PM2s offer a very comfortable listening experience, with a warm, enveloping sound, especially when driven by the partnering Oppo HA-1. This makes for a revealing, yet forgiving system on which you can listen to poorly mastered recordings, especially those 1980s early digital recordings which have a “glarey” midrange and somewhat unforgiving top end.

The Jade IIs present a very different profile – much leaner, less rich balance, but with a transparency and delicacy which is unrivalled at this price point.

vs Focal Elex
The Focal Elexes are quite a different beast in aural signature, with a brighter and more forward presentation than the Jade IIs. They are very enjoyable in a very dynamic way, but don’t quite have the ability to project the “out of the head” soundfield or the ability to resolve timbral textures with delicacy. But what Elex does have is energy and dynamics, which the electrostatics cannot match. I would say that the Jade II would be my choice for extended listening sessions.

vs Grado GH-1
As I have previously remarked, Grados have always trod a different path from many other headphone brands by projecting a very airy and brightly lit aural signature which retrieves a lot of “air” and ambiance cues – the Jade II can match this detail retrieval, but in a more unforced way. Where the GH-1s have an edge is a sense of dynamics which is a little more free, whilst the Jade IIs are more reserved. The Jade IIs still have an advantage in that cohesion and even-handed aural signature.

vs HE1000se
This comparison is probably the most pertinent for those who are considering a pair of high-end headphones from the same stable. Besides the obvious differences in the technology, there is a difference in the voicing of the two erstwhile stablemates.

In common, both resolve detail and texture superbly well, though I would give the edge to the Jade II in terms of timbral textures and ambiance recovery, but the HE1000se is no slouch in this regard.

What the HE1000se bring to the party is extra bass depth and solidity, where the Jade IIs are a little shy. In doing so, instrumentation and voices take on a more voluminous and more real quality. This was especially apparent in London Grammar’s album Truth is a Beautiful Thing (44.1/24 HDTracks FLAC). Hannah Reid’s voice is palpable with the HE1000se – the Jade II renders her voice exquisitely, but without the same weight and volume.

It will be a matter of horses for courses (of course), but the HE1000se offers a very complete package, and is also more portable, but it is almost 50% more in terms of cost.

THE LAST WORD
Electrostatics represent the pinnacle of headphone technology for most audiophiles and although this is not by any means a cheap headphone, the Jade II’s pricing is not stratospheric and as such, it performs admirably. It showcases all the qualities you expect from electrostatic technology – delicacy, transparency, detail retrieval and lovely soundstaging.

The HiFiMan Jade 2, therefore, comes recommended for those who value those qualities above all else and listen principally to acoustic music which does not require a “big bass”.