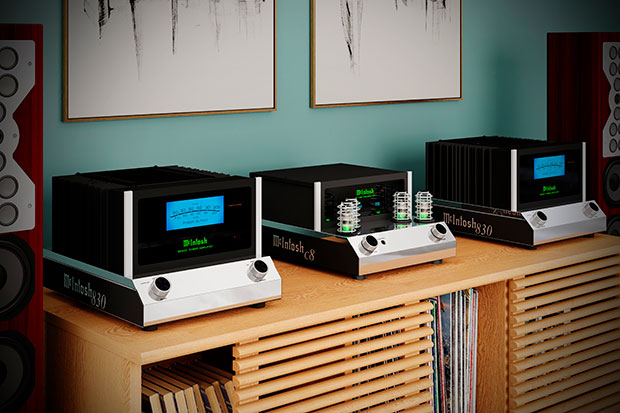 INSPIRED by recent retro design outings, McIntosh Labs has introduced the C8 vacuum tube preamp and MC830 solid-state monoblock power amp to further sate the wants of diehard fans. And while these units may look like they came out of the 1950s or 60s, the technology they sport is very much for today.

The C8 is powered by four 12AX7a valves housed inside a protective cage. This preamp has one balanced and two unbalanced pairs of analogue inputs, along with two for phono (MM and MC with adjustable loading). On board are a pair of XLR and two pairs of RCA outputs (one can be configured to feed an active subwoofer).

While it doesn’t come with any digital inputs as standard, the C8 is ready to go that way – McIntosh’s DA2 digital audio module is an optional dealer-installable add-on. There’s also McIntosh’s High Drive headphone amplifier built into the C8 for more intimate sessions with a pair of headphones. HT Pass Through and remote control data ports are standard.

The MC830 is a direct coupled output design, rated at 300 Watts into eight ohms or 480W into four ohms – the familiar meter gives an accurate readout of power output for both speaker impedances. McIntosh’s monogrammed heatsinks keep the MC830 running cool for optimum performance. Both a balanced and unbalanced input are included.

On board is McIntosh’s patented Power Guard technology that monitors the amp’s output signal to protect the speakers against being over-driven. The proprietary fuse-less short-circuit protection circuit, Sentry Monitor, disengages the output stage if current ever exceeds safe operating levels.