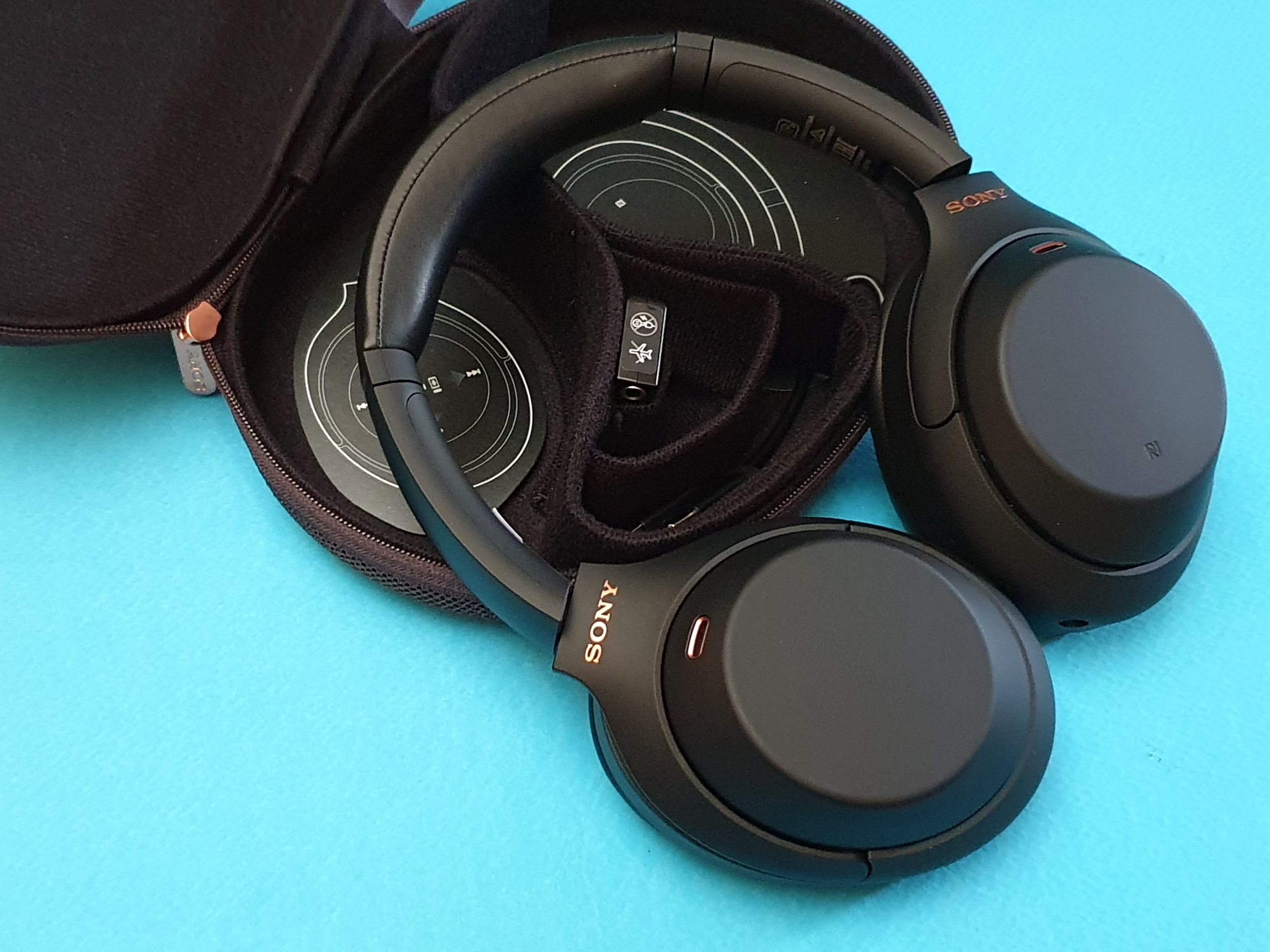 IT is now clear that I seem to have a certain fetish for noise-cancelling headphones – I have in my life been the owner of multiple pairs. Most notably, I have owned various iterations of the 1000X range of Sony noise cancelling headphones (and even one pair of Sony’s noise cancelling earbuds, the excellent WF-1000XM3s). I have written reviews of the 1000X, XM3 and compared them to XM2s, which I borrowed to make the comparison.

In addition, I have also in my stable the B&W PX, and Bose QC35s. None are absolutely perfect, but the most recent iterations of the leading brands in this space come close to a practical definition of perfect, which is to say, that it would be hard to point to specific improvements.

Thus it was clear that a review of the WH-1000XM4 would be both easy and hard. Easy as it is a familiar area and there are plenty of comparisons, but difficult in the sense that it might be hard to articulate the differences.

Indeed, right off the bat, the XM4s look very similar to the XM3s – it would take a very close examination to notice the differences in the physical construction – Sony has not strayed far from the original design which debuted with the 1000X.

Subtly different texturing of the plastics on the ear-cups and hangar sections, tightening up the gaps and reconfiguring the ear pads to be softer yet slimmer to accommodate larger ears… all these, and the headphones are a gram lighter overall (254g vs 255g) than their predecessors. It has a premium feel, though this is bested by the look and design of Bose NC700 and the B&W PX7, which exude just a bit more luxury.

The XM4s come in two colours – a dark finish called Black and a lighter one called Platinum Silver.

The button complement remains the same, but the second button has been renamed “custom” to reflect that it can be configured for different functions (via the companion app). The right earcup has touch controls, as before, but the XM4s now sport an extra set of sensors in the ear-cups themselves to detect your ear and hence pause playback automatically – a feature which some other headphones have had, but is new to the XM4s in 2020.

As with the XM3s, there is also the 3.5mm stereo mini-jack for wiring up to analogue inputs, and a USB-C port for charging.

The drivers remain the same 40mm units as before – but the analogue amplifier has been tweaked, as has the noise cancelling processing and sound processing DSP (now called DSEE Extreme). In addition, Sony claims the use of something called Edge AI which has been developed from its Tokyo recording studios to further enhance music playback.

Disappointingly, support for APT-X and APT-X HD has been dropped (presumably due to Qualcomm’s licensing costs) but AAC and LDAC remain, as does the base SBC codec. Like the XM3s, the XM4s also support Sony’s 360 Reality Audio – an immersive audio technology.

Feature-wise, the XM4s carry over the “Quick Attention” feature, by which you can hear the outside world simply by holding your hand over the right ear cup. But new with the XM4s is the “speak to chat” which toggles the attention mode on when you speak – very clever stuff indeed.

Also of note is that Sony has worked to improve the microphone pick up when using the headphones for taking phone calls (or Zoom conferences). My casual testing did show a marked improvement in this aspect, though this was not how I used the headphones principally.

There are a multitude of smart features accessible using the companion app, available on iOS or Android, including calibration of the headphones for your ear shape to maximise noise cancelling. This is where you also can set up the smart features which will automatically switch noise cancelling modes based on your movement, location and activity.

You can also set up the 360 Reality Audio which involves taking photos of your ears to model the immersive audio environment. The function of the buttons and your Google Assistant settings can also be customised.

There is no IP rating for these headphones, so it is not recommended for strenuous exercise or unshielded use in the rain.

Last but not least, the XM4s can stay connected to two audio sources and switch between them automatically – a fantastic feature for today’s multi-device world.

LISTENING
I principally used the XM4s with my iPhone 11 Pro Max as well as a Huawei P30Pro. As with the XM3s, I tried them in a number of likely situations – at home, in a cafe and on an aeroplane. I also briefly drove them from the Quad HiFi DAC output of a LG V50+ to see how they fare with analogue input.

Straight off the bat, I was struck by the further improvements that Sony has wrought from the XM3 to the XM4 – there was a greater spaciousness in the “headstage” and a more “out of the head” feeling. Pacing was improved again from the XM3, with even greater snap to the complex rhythms. Bass is still ample but even more textured – plucked double bass is rendered with both greater body and timbral colour. The overall balance remains warm and easy to listen to, but now there is greater insight into the music.

Diving into specific tracks, which I revisited from my last review two years ago of the XM3s, these differences were driven home on each and every track. Of note were the complex poly-rhythms on Dave Brubeck’s Take Five (single DSD rip from SACD) – the increased ability to pace and render the textures in the bass made these even more enjoyable. The midrange and high end were not given short shrift either, and had good definition. There isn’t quite as much air as you would get from open-backed headphones, but for closed-backed noise cancellers, there is still good ambient and detail retrieval.

Moving on to maestro Herbert von Karajan conducting the Berlin Philharmonic in his 1963 rendition of Beethoven’s Symphonies (Tidal MQA Stream). The additional spaciousness of the “headstage” was most evident, with the orchestra timbres painted in great fashion – with a good foundation of the mass of the orchestra. The greater detail also made for easier identification of the sections as well as “height” of instruments such as the woodwinds.

As I was streaming music through Tidal on a LDAC codec on the Huawei P30 Pro, it seemed that this was the opportunity to test the LDAC codec, which does offer a slightly more open and airy presentation vs AAC, but this is very subtle. In addition, Tidal on the Huawei can be configured with 360 Reality Audio, and this was a great experience (this is also available on the XM3s).

I first sampled The Alan Parson’s Project’s Eye in the Sky which has a specific 360 Reality Audio stream on Tidal, and it was lovely – there is a sense of height and sound from the “rear”. I switched to the 360 Reality Audio mix of Miles Davis’ Kind of Blue – again, the projection of height and space was convincing (even though this is a largely artificial construct, given that this is originally a three-track recording). The improved pacing and detail retrieval made this stand out even more than with the XM3s.

I rounded out my listening with my iPhone feeding Apple Music’s curated personal playlists, so a lot of the music was not familiar, but it did showcase the ability of the XM4s to cross genres and present all of them with great aplomb – the DSEE Extreme processing does help present compressed music streams in an very enjoyable way, improving dynamics and perceived detail.

On noise cancelling: The XM3s already had excellent noise cancelling, which was top of its class until it was unseated by the Bose NC700s. With the XM4s, although we are really in the area of diminishing returns, there has been further improvement. Rejection of the noise in the cafe, and of background TV dialogue at home was superb, even better than the XM3s, really giving you that sense of a “personal bubble”. All of this without the “vacuum in your head” feeling which used to plague the earlier Bose QC noise cancellers. The app furnishes some automation to selecting the modes, based on the movement of your head, your location and your preferences. The “speak to chat” feature was also a great convenience – as I was using the XM4s in a Starbucks, just speaking up to order my coffee was super convenient, with no hands needed.

I was also able to test the headphones on an ATR Turboprop flight – they worked superbly in reducing the roar of the props to a dull murmur, easily masked by playing music. On the apron, the XM4s also do a great job of shielding your hears from the piercing whine of the plane’s APUs. I would say this is a step up again from the XM3s, which already did a great job.

On the analogue input: Driving the XM4s from the LG V50+ was enlightening – the analogue 3.5mm input has good transparency to the source . You can hear the differences of the various files and of the DAC driving the input. Although presumably, all of this is processed, Sony has made the processing transparent to the source, giving you the best of both worlds.

Battery life was more than good enough, though not as good as the XM3s which came in at 30 hours on a full charge, whilst the XM4s are rated for 20 (Editor’s note: Sony has clarified that the XM4’s battery life is the same as the XM3, ie 30 hours), which is still more than most people would require, even on very long flights (which are a rarity at this moment in time in 2020).

vs XM3
When I last reviewed the XM3s, they represented a big step from the 1000X, especially in the dimensions of pacing and also transparency. In the same vein, the XM4s represent a continuation of those improvements. The key aspects are a larger head-stage, further improved pacing and even better timbral textures, especially in the upper bass and mids. This makes the XM4s truly a pair of noise cancellers which an audiophile will enjoy, whilst having a very approachable sound for the general consumer – this is a neat trick to pull off.

There is enough of an improvement to warrant an audition, especially if you have been a heavy user of the XM3s and a new pair of headphones are in order.

THE LAST WORD
The XM3s represented, at the time of their introduction, the pinnacle of noise-cancelling headphones, but the field has moved on, with Bose coming back into the fray with its al-new NC700s and Bowers & Wilkins with the PX7s. Sony did not rest on its laurels and built upon a proven design with the thoughtful addition of useful features and meaningful improvements in sound quality. Although it’s somewhat of a pity that some codec support has been left off, I suspect that it will not inconvenience many.

Recommended heartily then – the XM4s are now the headphones to beat in this space and are still relevant even if we are not flying as much as we used to.