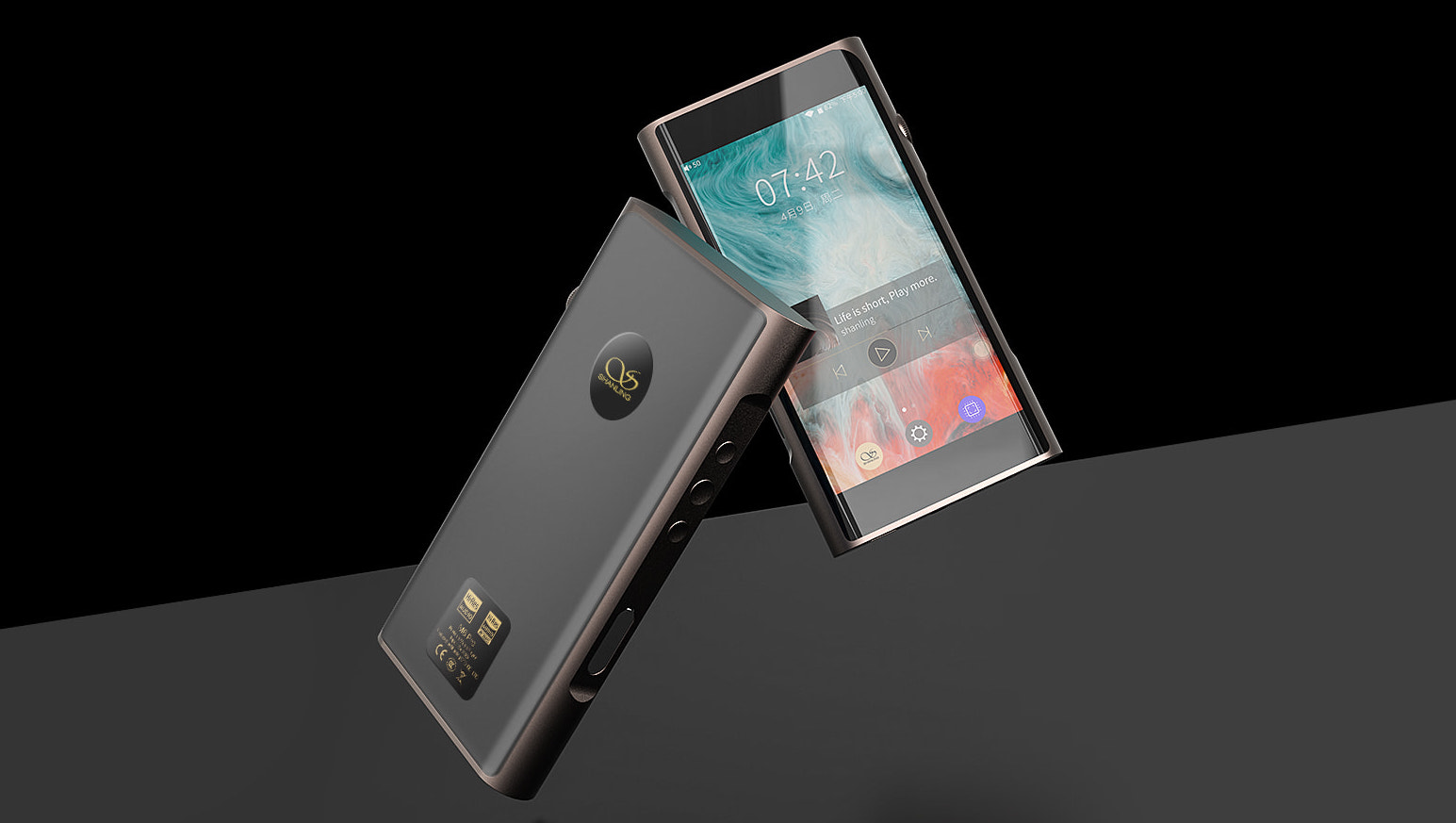 – Neutral tuning might sound “dry” to some who want a fun sound; hiccups in the user interface; bulky and heavy like most DAPs; battery drain with screen off and nothing playing.
Sound: 9/10
Value: 8/10

THE war between digital audio players (DAP) is alive and well. When it comes to other equipment – headphones, speakers, amplifiers, DACs – there’s not much you can do in terms of features and functions as you approach their technical plateau. On the other hand, you can cram a lot of features and functionalities as you need in a DAP. Shanling took its chances and exploited the Android operating system as much as it could with the its M6 Pro.

The Shanling M6 Pro comes in a beautiful titanium shade of milled aluminium with rounded sides and flat ergonomic recesses. The large vibrant IPS touch screen is your primary mode of interaction but you still get a nice set of Play, Previous, and Next buttons on the left side, plus a multipurpose push-button volume wheel on the right. There’s also a micro SD slot that supports up to 2TB of storage.

Above the scroll wheel is a status indicator that glows red during operation/charging. The colour changes depending on the Bluetooth codec; blue for SBC, green for LDAC, purple for aptX, and yellow for aptX-HD. At the bottom there’s a multipurpose USB-C connector, a single-ended 3.5mm socket, a balanced 2.5mm socket, and a balanced 4.4mm Pentaconn socket.

The M6 Pro runs on a Qualcomm Snapdragon 430 processor, 4GB of memory, and 32GB of internal storage – not exactly high-end but we’re not trying to do video editing on this thing. For audio duty, the M6 Pro is designed balanced from the ground up. A dual AKM AK4497EQ DAC chipset processes stereo channels independently, and each channel has two pairs of OPA1622 as low pass filters and two pairs of ADA4610-2 and BUF634 as buffers.

This thoroughbred topology translates into an extraordinary specification. Signal-to-noise ratio is 121dB for single-ended and 123dB for balanced. Output power at 32 ohms impedance also triples from 200mW single-ended to 600mW balanced. Channel separation is rated at 75dB single-ended and 110dB balanced for the same impedance.

FEATURES
The M6 Pro operates on Android version 7.1 with Google Play Store enabled on the latest firmware. This means you can install regular apps like Tidal, Qobuz, and YouTube as you please.

I had Tidal installed in my unit where I spent much of my listening, but without SIM support, I was at the mercy of WiFi range. Speaking of WiFi, the M6 Pro allows connection to a Network-attached Storage (NAS) which unfortunately I don’t have. Bluetooth works bi-directionally for LDAC and SBC while transmit only for HWA LHDC, aptX and aptX HD.

The DAP supports PCM files up to 32-bit/768kHz and native DSD up to DSD256. I played all sorts of file types with no problems – it should be the case judging by the essay of supported audio formats listed on the product website.

Shanling also allows you to toggle between single or dual DAC operation giving you the choice between battery life or performance. You can also toggle between Android Mode – where it works like a usual Android device, and Prime Mode – where only the Shanling music player app is enabled, making it a pure music player. Gain is provided in either Low, High, or Turbo.

The app works like most music player apps. You can browse your music by song, folder, album, artist, genre, and playlist. You can also view by hi-res where it only shows lossless files in your storage. The “Now Playing” screen is nice, informative, and simple, it shows all the usual playback controls you need.

The M6 Pro can be used as a USB DAC when connected to a source via USB C. Vice versa, it can be connected to an external DAC as a source. File transfer works normally by drag and drop.

IN CONCERT
The whole unit looks and feels premium. Navigation buttons click with a very nice tactile feedback and are raised just enough for touch operation. The volume wheel is clicky and slightly recessed to prevent your music going fortissimo in your pocket by accident. Clicking the wheel toggles the screen on and off. Pressing and holding it gives you the option to shut down or reboot.

This set of controls works very well when I was out and about. I could skip tracks and adjust the volume without taking the M6 Pro out of my pocket which is something I avoid due to the size and weight. At 244g, it’s not the lightest thing you would want to pocket – to put things into perspective, an iPhone XS Max weighs 208g.

Shanling quotes the 4000mAh battery life at 12 hours when used single-ended with dual DACs, nine hours single-ended with both DACs, and eight hours balanced. I found these specifications accurate as I could easily get over nine hours of playback. You will want to turn the unit off when you’re done listening because the DAP continues to drain the battery even with the screen off and nothing is playing.

Charging speed depends on the type of charger you’re using. The M6 Pro doesn’t come with a charger so you’ll need to use your own. It does come with a braided cable that I would advise you keep in the box and get a new one. Braided cables are good on paper but once you start using them, they always develop kinks and permanent bends. With a 5W iPhone charger, it took me 3.5 hours to charge from 0% to 97%. Charging speed improves dramatically with either a Huawei fast charger or LDNIO’s compatible QC 3.0 fast charger. Both took around 2.5 hours to charge from 0% to 97-98%.

The M6 Pro makes for a good Bluetooth receiver, especially nowadays when phone manufacturers are choosing to remove headphone jacks. I found that the Bluetooth connection on the iPhone XS only uses SBC while other Android phones like the Vivo V11i uses LDAC. It’s worth noting the M6 Pro sounds a lot cleaner compared to the Chord Hugo V1 when paired with the iPhone XS Bluetooth.

Touching on the sound of the player itself, Shanling configured the M6 Pro with a neutral and reference tuning. There’s no real warmth, darkness, brightness, or anything else to be heard. The M6 Pro presents music without rose tinted glasses. Perhaps if it were a pair of glasses, the M6 Pro would be prescription bifocals.

With DSD, the M6 Pro has a refined sound that peers deep into the song’s details. Offering accurate imaging and stunning soundstage, the M6 Pro proves itself to be a precise listening instrument. The headphone output is clean and didn’t hiss on any of my sensitive IEMs and headphones. It is also powerful enough to power my Sennheiser HD525 with the Turbo gain setting. I would still recommend pairing an external amplifier for better handling of power hungry headphones.

The preinstalled Shanling music player app works well but I’m disappointed it doesn’t have gapless playback. Tracks switch with a gap and pop so you wouldn’t be fully immersed in seamless albums like Pink Floyd’s Dark Side of the Moon or Tame Impala’s Currents. This doesn’t happen in other apps so it must be the software rather than the hardware.

With the M6 Pro used as a USB DAC through my computer, desktop Tidal was noticeably noisier compared to the mobile app. On the mobile app, there’s heightened dynamic range as well as lower noise floor. Beautiful Stranger by Halsey has some crackling in the mix, I found they are more subdued on the M6 Pro. Also with the mobile app, whenever I try to scrobble through a track for the first time, it will minimise the “Now Playing” screen.

The touch screen is also clunky at times and will register accidental touches when you’re holding or picking it up. These, however, are quite common, music players may look like modern smartphones but they have nowhere near the same amount of R&D when it comes to interface design and user experience.

On the upside, there’s no lag when I swiped and navigated through my music library. Most times, it was smooth and unobtrusive. The Android navigation style also took no time at all to get used to. The user interface is responsive, save for some false taps.

THE LAST WORD
The M6 Pro has all the hallmarks of a great DAP. The premium materials with an almost endless list of features give it tremendous value for the price. Sure, the user interface needs a little more polishing and I’m sure they will work on updating the software.

If you own revealing in-ear monitors or earphones and are looking for a DAP with a refined sound, I would recommend giving the Shanling M6 Pro a try – because I certainly enjoyed my time with it.