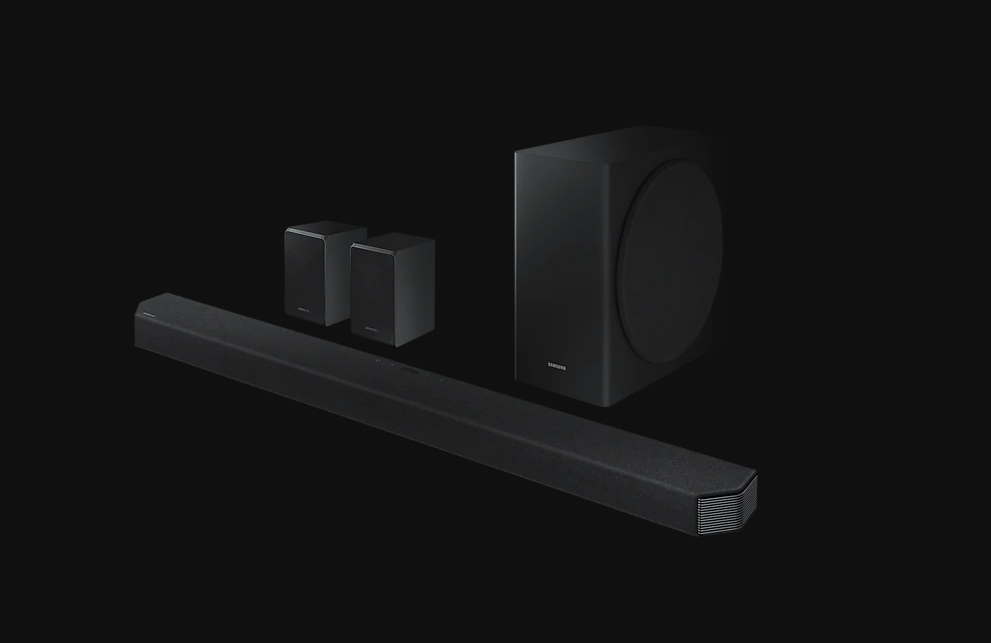 IT’S easy to understand why soundbars are so popular these days. No matter how visually spectacular modern flatscreen TVs are, their audio performance is invariably compromised. You can blame this on the trend of shrinking bezels – with some even disappearing completely – on modern displays. And as they get increasingly thinner (you can literally roll some of them up now!), speakers are getting squeezed out. Despite efforts to make mounting drivers on the rear viable, they are quite simply, pointed in the wrong direction.

Soundbars, and of course the Samsung HW-Q950T here, don’t have this fatal flaw. This top-of-the-line model from the Korean manufacturer not only rightfully points its speakers towards the listener, but is a full-blown Dolby Atmos/DTS:X set-up.

Samsung says this a true 9.1.4 channel system comprising nine for surrounds, one for low-frequency effects (subwoofer) and four for overhead – the maximum number of channels available for current 3D surround sound formats. It achieves this with a total of 20 drivers, most located in the main bar component placed at the front (firing at different angles), including four (with two firing upwards) in the satellite pair and a dedicated subwoofer.

The best thing about the HW-Q950T is that all four pieces connect to each other wirelessly. You still have to supply each of the four with mains power, but imagine having to wire up 14 speaker channels and an AV amplifier – so this is a great relief indeed!

The main soundbar component is fairly large and long at 6.9 x 120 x 13.8 cm (h/w/d), but notably has a very low profile. At just under 7cm, it should easily fit below the TV screen without obscuring any part of it, even those with stands placed on racks. The unit is also where you wire everything up – one HDMI connection to the TV (with eARC), two HDMI inputs for other source components, an optical digital input and the mains input. There’s a USB port there as well, but this is solely for firmware updates, which I doubt you’ll ever use as this can be done over Wi-Fi.

There is a host of features available on the HW-Q950T, but all eyes (or ears) will be trained on the fact that it features actual Dolby Atmos/DTS:X sound (including Dolby TrueHD and DTS HD Master Audio).

It also features what it calls Q-symphony, which activates the TV’s on-board speakers (caveat, only works with Samsung’s 2020 QLED models). The HW-Q950T also works with the company’s SmartThings app, but controls available on the app are rudimentary and mainly functional commands only.

As it is Wi-Fi enabled, the soundbar works with streaming services like Amazon Music, Spotify and TuneIn or you can connect another source device via Bluetooth. Voice commands are possible too, but only via Amazon Alexa.

SETTING UP
All wired connections are placed at the bottom panel of the soundbar unit, so you have to lift it up to access them. I found it a bit of a squeeze to accommodate three HDMI cables and an optical cable as each has to bend at 90-degree angles to fit, but still possible as the recess is shaped to allow this… provided the cables are regular-sized and not too thick.

Booting up and using the HW-Q950T for the first time, however, is not an intuitive process and will require reference to the manual. You’re supposed to connect power to – in specific sequence – the subwoofer, then the satellites and only then the soundbar, and they should all automatically connect. For whatever reason, this didn’t work for me and I had to rely on the manual method, which entails pressing a small button on the subwoofer and the two satellites and then another on the remote to kick it into life. On subsequent usage, everything is supposed to power on (and down) and connect automatically at the touch of the Power button.

Perhaps it was because I was using a demo unit that had seen some use (coming directly from Samsung Malaysia, maybe it was part of a roadshow) but there were a few occasions where the subwoofer and the surrounds did not turn on when the soundbar was powered up, and I had to do repeat the manual set-up process.

Calibrating the output levels for each channel was not straightforward either. Ideally, there should have been some sort of auto-calibration or at least a guided calibration wizard, but alas, there was nothing of the sort. While I had some idea what to listen for, I don’t know how a home theatre novices will manage. In the end, I had to resort to the “hidden” commands on the remote (long presses of certain buttons) to access the set-up menu and adjust each level by ear.

Here’s where I hit another hurdle – the tiny display is located on the top panel of the soundbar and not the front to always be visible from the listening position. So yes, I had to sit down and listen then get up and walk over to the soundbar to see what I was adjusting. Repeat and rinse for the centre, side, front top, rear and rear top levels….

LISTENING
After the initial workout, it was time to enjoy the fruits of my labour. Fortunately, I can say, it was worth the effort. Most importantly, the Dolby Atmos/DTS:X effects actually do sound like it’s coming from up top.
I started off by playing the Leaf and Amaze you see in cinemas, and the sonic effects of raindrops, animal sounds, howling winds etc., all work very well. You can hear sounds coming from above sweeping through the left, right, front and rear channels. And it’s not just from the speakers but the spaces in between them, too.

Switching to normal movie fare, I slipped in some crowd favourites like Hacksaw Ridge, Blade Runner 2049 as well as some Star Wars movies. Bullets whizz by your ear, flying cars roar past you, X-wing fighters swoop around with lasers blasting while Tie fighters scream in the skies. Gripping stuff.

And it works pretty well when gaming too. With Star Wars Battlefront II, there are sequences where you can hear the protagonist in large, echoey caverns and discern where other non-playing characters are relative to where and how you move.

Beyond steering effects, the low frequencies had some real heft, with the large subwoofer able to punch out some truly deep bass. There’s a scene early in Lord of the Rings: The Fellowship of the Ring where a descending sound effect resonates at the moment of Sauron’s defeat, which it managed to render very well. Spoken voices were also clear and articulate and had plenty of detail, similarly with high frequencies, which did not sound overly shrill either.

It also exhibited some good dynamics, which translated well when playing music too. Fidelity-wise, the HW-Q950T doesn’t have high-end, audiophile-level performance, but it could give some budget systems a run for their money. Still, it was enjoyable enough to keep me playing music in the background all day while I was working from home during the coronavirus lockdown period.

THE LAST WORD
In broad strokes, the HW-Q950T has loads of power on tap, good dynamics, beefy bass with articulate midrange and treble – the main aspects you need from an AV system. It’s not cheap, but this is one of the better home-theatre-in-a-box systems available. It may not have the most faithful reproduction, but it sure is fun.

Initial set-up and the lack of auto-calibration issues aside, there’s a lot going for the Samsung HW-Q950T. Could you do better with a separates AV system? Perhaps you could, but you are unlikely get the full 9.1.4-channel experience at similar prices.