A super Model 30 from Marantz 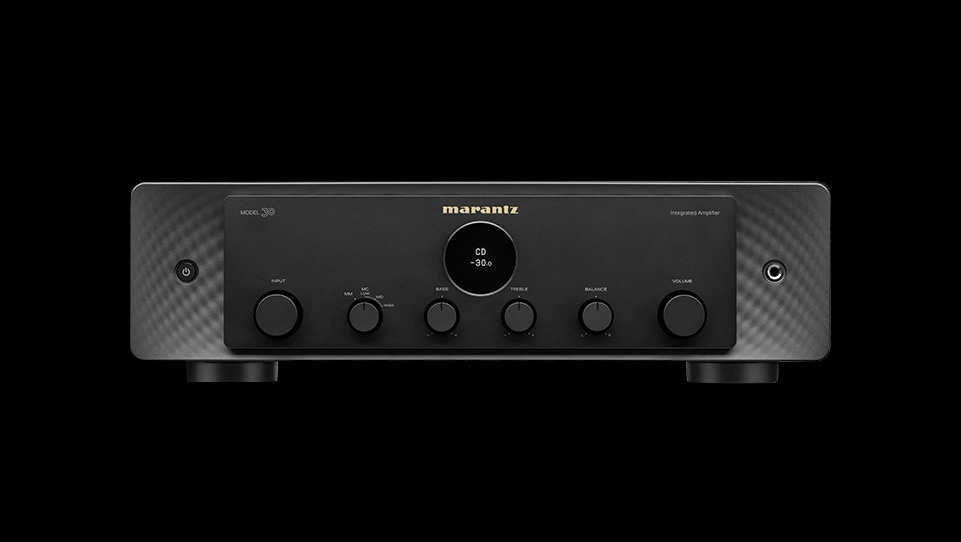 + A versatile no-nonsense modern, yet traditional, straight stereo amplifier with a great phono stage built in.
-The design cues are wasted from afar; crappy and unintuitive remote control.
Sound: 8/10
Value: 8/10
A guide to the ratings

MARANTZ, a name synonymous with high-fidelity audio. It has been in the business for more than 60 years, making numerous legendary pieces, from amplifiers to industry-leading CD players. My first taste of Marantz was in the 1990s with the venerable CD52 Mk2 CD player, the gold standard for CD playback in the mid-90s to the 2000s. The Mk1, Mk2, Mk2 SE and the ultimate Ken Ishiwata “KI Special” models were well known among the enthusiasts.

Post-Ken Ishiwata, modern Marantz is now part of the Sound United Group with Denon, Polk and Bowers & Wilkins. The company has remained focused on hi-fi and AV, and delved into streaming in more recent times. The Model 30 is targeted at the audiophile market, and is a straight stereo integrated amplifier. It sits somewhere in the middle of Marantz’s integrated amplifier line-up but comes with an all-new design language. Designed and built in Japan, the Model 30 boasts of the fact that it was tuned by Marantz’s own “Sound Master”.

So, no bells and whistles such as a built-in DAC or a network streaming module here, that’s left to the Model 30n SACD player, which shares the Model 30’s design language and ideals. Both were launched together last year. This amp does have a phono stage on board and comes with a remote handset.

SPECS ‘N STUFF
The Model 30 comes in either black or white. The first thing that’s clear from the fascia is how symmetrical it is. The prominent iconic porthole under the gold “Marantz” lettering is supported by four knobs under it. These, in turn, are flanked by two bigger knobs for input selection and volume. Even the on button is balanced by the headphone socket. Total symmetry.

The faceplate comprises two pieces. The front slab sits on a curved textured aluminium slab which is lit by a nice white LED glow. Great in the dark but almost not visible in the day or when it’s bright. There are no other lights save for the input and volume level digits on the porthole. It looks good up close but somewhat wasted from the listening position, where it appears just as a black box with a small display which is not really legible from afar.

At the back, there are six RCA line inputs and one MM/MC input. The MC input is adjustable via one of the front knobs to cater for different impedances. There is only one set of speaker output terminals, solid big brass coloured ones at that. A set of power amplifier inputs and pre outputs are provided, giving the ability for the Model 30 to be used as a preamp or power amp. The remote control is a terribly designed black slab with just too many buttons and illegible labels, and no backlight. Marantz, please do better with the remote!

The Model 30 uses Marantz’s proprietary HDAM technology for low noise and extended frequency range, and boasts a linear volume control with a new electric volume system. It is a Class D design, outputting 100 watts per channel into 8Ω and double that into 4Ω loads. Marantz claims it will drive any speaker.

LISTENING
The amp needed a couple of days to warm up and run in. Out of the box, it sounded harsh, lightweight and shouty, and lacked coherence. On the third day of being left powered on, this totally changed. Everything clicked, the harshness was gone and what came out of the speakers was a very detailed, airy and spacious presentation of music with a hint of forwardness, resulting in a big bold presentation.

Detail retrieval and spacious soundstage are this amplifier’s fortes. The detail heard on Stairway to Heaven by Rodrigo y Gabriela’s Live in Japan album was simply astounding. The intimacy of the recording was presented in a breathtaking manner without losing the satisfying bass thump when Gabriela smacks her guitar like a set of drums. It’s ballsy and full sounding with great bite and speed. Imaging was good with a nice depth to it. Compared with a similarly-priced Yamaha AS-2100 which was also on hand, the latter lost out on absolute detail retrieval but has more richness and weight on the midrange and bottom end.

On vocals, Allison Russell’s voice on Nighflyer from her Outside Child album was pegged right in the centre of the big airy soundstage with pinpoint sharpness, and without losing the weighty raspiness. The lower frequency bloom lent a bit of warmth to the presentation in an otherwise lean tonality. The resident Accuphase E470 portrayed the vocals with more warmth and weight with a tad more caramel like sweetness to it. The bass on the Accuphase (which, to be fair, costs double) also goes lower with more depth and better definition. Having said that, despite the detailed and the lean presentation, the Model 30 did not veer into any harshness or brittleness. Lengthy listening sessions can be had without fatigue.

Whilst the Model 30 was under review, the excellent new Iron Maiden Senjutsu album dropped. Oh my, the Model 30 really shined. The power and control were simply superb. The attacking guitar trio of Adrian Smith, Jannick Gers and Dave Murray, with Steve Harris’ galloping bass line, Nicko McBrain’s relentless drumming and the haunting howls of Bruce Dickinson were all portrayed with great aplomb. It was sheer joy letting the Model 30 do its thing from start to finish. Slow and intimate when it needed to be and on a dime, turning to fast and furious when it was called upon to do so. The Model 30 was always in control and power was delivered in an effortless manner. This amplifier can properly rock. Boring and flat it is not.

On the vinyl front, it is obvious that Marantz put a lot of effort with the phono input. The same tonality and traits of the sound played through the line input were present, albeit with a tinge of added warmth as expected from the medium. Compared with the resident Aimee two box phono preamp, it loses out a bit on absolute detail retrieval and soundstage depth but the difference is small. The Model 30’s phono input is not an afterthought or a “by-the-way” addition.

The Model 30 fitted well with my Bryston Model T standmounts. I swapped them over to a pair of Goldenear BRX bookshelves. A ribbon design with passive radiators. The BRX has great detail and is very transparent sounding with a nice big soundstage. I am happy to report that the slight forwardness of the Model 30 matched well with the BRX. It gave the BRX a greater sense of presence in particular on sparse vocal-centric music. The added airiness made the speakers “disappear”. It will definitely impress the neighbours when they come around for dinner.

On to the caveats, a degree of care should be exercised when pairing the Model 30 with bright and analytical speakers. The detail and forwardness may be too much for easily excitable speakers.

THE LAST WORD
It is amazing how far modern Class D designs have come, and the Marantz Model 30 is testament to this. There was never a time where it felt out of breath, it was consistent and across the spectrum.

This is excellent amplifier for the money and should be on the list for anyone in the market at this price point. The lack of bells and whistles is made up for by its sonic abilities and versatility.