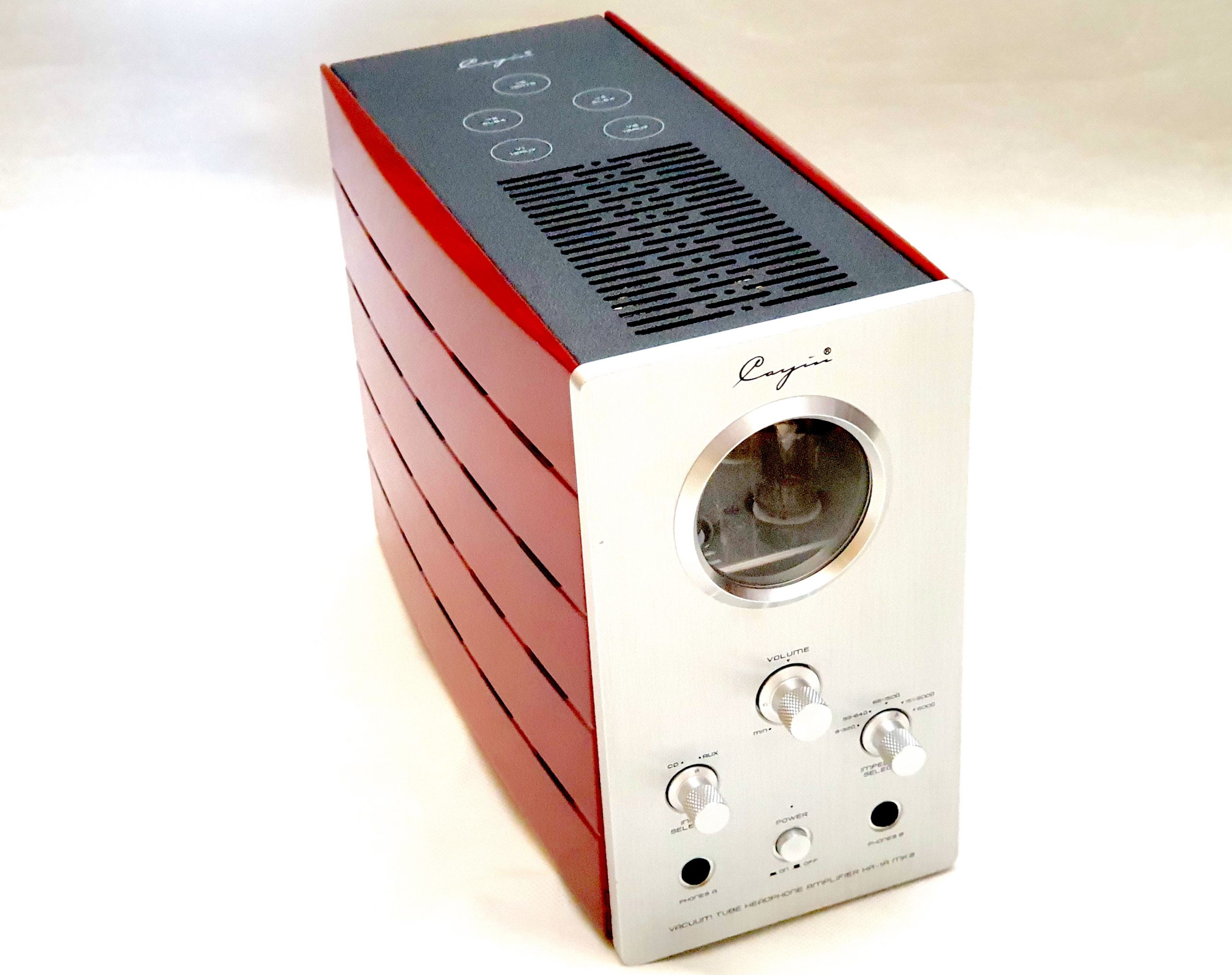 + Bold sound with excellent dynamics and tonal density; decent technicalities (soundstaging and detail); powerful amp for high impedance headphones; good preamp out.
– Not very quiet; not a powerful amp for low impedance loads (50Ω or less).
Performance: 7.5/10
Value: 7.5/10
A guide to the ratings

The Cayin HA-1A mk2 is currently Cayin’s cheapest transformer-coupled tube amplifier offering. Having been around for about five years now, the HA-1A mk2 is hardly new, but in this review, I hope to provide insight into a few aspects of this product that were not covered at length previously.

Firstly, what is a transformer coupled tube amplifier? A vacuum tube typically operates at very high voltages, has a very high “output impedance” (around 4500 -7500Ω for an EL84 in ultra-linear mode), and also passes a fair amount of DC. Sticking a headphone directly onto a tube would mean death to the headphone, and perhaps its user too.

A transformer solves these problems by blocking DC and stepping down the high voltage and output impedance to something more palatable for headphones. However, since audio transformers are difficult to design and manufacture, cost increases exponentially with quality. As a result, tube-transistor hybrids are usually significantly cheaper than their transformer coupled brethren.

Back to the amp in question – the Cayin HA-1A mk2 is a two-stage transformer-coupled tube headphone amplifier/preamp with 12AU7 “preamp” tubes and EL84 “power” tubes, which operates only in the ultra-linear mode (unlike its predecessor that had a triode/ultra-linear switch). Anyway, does it sound good? In a word, yes.

SET-UP
All testing was performed using my HD6XX, modded T50RP and Alessandro MS-Pro. The sound signature of the amp was triangulated based on comparisons versus the Pioneer M22 and Schiit Vali 2+.

To collect impressions, I used the amp the same way I would use any of my own amplifiers – listening to background music, more “active” listening for flaws and strengths, and everything in between.

LISTENING
The Cayin has a big, bold and dynamic presentation, which is also not particularly lacking in finesse. Drum hits are delivered with startling impact and there is a tasty “palpability” to the sound. The stage is distinctly three-dimensional and laid out with sufficient clarity for the listener to follow individual instruments with ease. Although there is warmth and bloom, it is not so heavy handed that it will offend listeners used to solid state amps. Nonetheless, the tube bloom makes it quite clear that you are not listening to a solid-state amp, or even a hybrid.

Note on tube rolling: The amp originally came with RCA black-plate 12AU7s, which were noisy, but sounded really good with the HD6XX. The replacement new-production JJ 12AU7s were quiet but somehow, a bit boring by comparison. Most reports about this amp do say that it is most sensitive to preamp tube changes, so if you’re going to spend money on tubes, focus on just the 12AU7s.

As the Cayin has a veritable zoo of options (different sounding outputs and different impedances), one might ask, how do these options affect its sound?

Outputs A and B are labeled “lively” and “refined” respectively in the user manual, and the former output has slightly higher gain. These outputs probably have different levels of negative feedback (NFB), with output A having maybe 3dB less NFB. I think output A sounds slightly livelier (duh) while output B has slightly better frequency extension, but the differences are so minute, I would not trust myself to pass a blind test.

The amp has five impedance settings: 0-30Ω, 32-64Ω, 64-150Ω, 150-300Ω and 600 Ω. Each setting corresponds to a different step-down ratio (tap) on the transformer. I found that with the HD6XX, the impedance settings seem to change the “looseness” of the sound – the sound got tighter (more constricted) at lower impedances and looser (more relaxed) at higher impedances. This effect was not quite as pronounced with the T50RP or MS-Pro, for some reason. Noise also increased with output impedance.

PAIRINGS
Tube amps are generally speaking, difficult to optimise for a wide range of loads and sensitivities. Based on the Cayin HA-1A mk2’s specifications, it appears to be optimised for high-impedance low-sensitivity loads, which does pan out in my listening impressions.

HD6XX: This is theoretically the optimal pairing for the Cayin HA-1A mk2. Sure enough, the Cayin drives the 6XX like a champ, to the point where it matches my speaker amplifiers for bass impact. The Cayin’s warm signature does slightly compound the inherent dullness of the HD6XX, but this could be alleviated by rolling a different pair of preamp tubes.

MS-Pro (bowl pads): This is theoretically the worst pairing for the Cayin HA-1A mk2. However, the MS-Pro does not need anywhere near 2W of power, so even the lower end of the Cayin’s output is perfectly fine. In this case there is genuine synergy – the warm tilt and solidity of the Cayin’s sound perfectly counters the brightness and thinness of the MS-Pro, and the tube “mojo” also accentuates its strengths in electric guitars and the like.

T50RP (Smeggy Thunderpants): My version of the T50RP is capable of throwing a decent soundstage and has plenty of bass impact, but is only so-so from mids and onwards. The Cayin acquits itself reasonably well here, as it was able to alleviate some of its tonal issues. However, I could not help but feel that this is a somewhat average pairing. Nothing particularly bad, but nothing special either.

Pioneer M22 (as a preamp): Currently, I can only use the Pioneer M22 with headphones, which is massive overkill, but eh. In a headphone rig, the Cayin is much too noisy, but damn it sounds good – it was like all of the Cayin’s positive qualities were turned up to 11 with no noticeable loss in detail. I’m guessing that the Cayin HA-1A mk2 would make a very nice preamp for a speaker-based set-up.

COMPARISONS
versus Schiit Vali 2+: The Schiit Vali 2+ is a fairly neutral amplifier, with only a little tube bloom (by comparison). It is also significantly quieter. On all three headphones, the Vali 2+ sounded leaner, but also cleaner. In terms of power, it does not drive the HD6XX as well as the Cayin does, but keeps up when it comes to the T50RP. Soundstaging is where the Vali 2+ compares most poorly – compared with the Cayin, the Vali 2+ sounds flat and compressed. Everything feels rather 2D compared to the 3D presentation of the Cayin.

versus Pioneer M22: The Pioneer M22 is TOTL speaker amplifier from the glory days of Japanese audio, and it happens to be very, very quiet – more than quiet enough for my most sensitive headphones. The Pioneer M22 felt much more refined than the Cayin, and also is a lot more powerful. The soundstage was somewhat wider and deeper on the M22, too. Then again, the Cayin is a tube amp, and the Pioneer isn’t – the former has an inherent “mojo” that the latter does not. It also helps that the Cayin isn’t a room heater.

CONCLUSION
The Cayin HA-1A mk2 is a somewhat “traditional” take on tube amps – it has tube bloom and warmth in spades, and also technical chops good enough to make it a solid recommendation.

It is a pity that the market has moved in a somewhat different direction from its strengths (i.e., towards very low impedance planar magnetics), but it is otherwise, a very competent amp, especially if you have headphones that match well with its characteristics, e.g., Grados and the Sennheiser HD800.