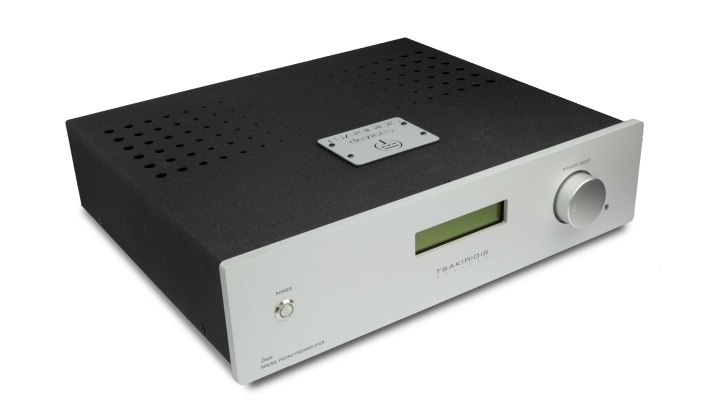 + Delightfully lush and airy sounding phono stage, exemplifying the best of what analogue can be without the astronomical pricing of some competitors; very easy set-up for matching cartridges.
– Highest MC gain of 68dB may be too low for the lowest output MC cartridges.
Sound: 9.5/10
Value: 9.0/10
A guide to the ratings

TSAKIRIDIS Devices is a Greek manufacturer founded only in 1987. Its main product lines consist of amplifiers, all of which are hand-crafted with the highest component parts in Greece. Its stated mission is to make high quality audio equipment at a price/performance ratio that would set the products apart from the rest – equipment that sounds good, is easy to live with and looks attractive too!

The component for review here is the Tsakiridis Zeus, the only phono preamplifier in the range. The Zeus comes in two configurations – the Standard which uses Mundorf Evo capacitors in the interstage and in the output signal stage, and the Ultima, reviewed here, which has Mundorf Evo Silver Gold Oil signal capacitors.

The Zeus Ultima exudes simple elegance with a sensibly sized LED display in the centre of the front plate. A large control knob at the display’s right side enables all the necessary adjustments for cartridge matching. The Ultima is equipped for inputs from two sources, so one can have a moving coil cartridge on one input and another moving coil or moving magnet cartridge on the other. Settings are very intuitive, requiring only turning and pushing the knob. I took about five minutes to set up for my two cartridges.

Settings available include a range of gain, capacitance and impedence to suit almost all cartridges in the market except that the maximum gain of 68dB may not be sufficient for the lowest gain models of 0.2mV and below.

The Ultimate has both single-ended and balanced output, and the entire unit is well finished, exuding good craftsmanship and care in design. The top plate itself is worthy of mentioned, being silvery specked sand-blasted with ventilation holes in the form of the brand name. A nice touch, indeed.

In terms of design, the Zeus Ultima is a hybrid design of semiconductors and tube. The highest quality op amps are used in the input and gain stages whilst the final output stage is a single 6DJ8 tube. Tsakiridis claims that such a hybrid design enables excellent RIAA equalisation, accurate reproduction of signals and highest sound-to-noise ratio. The usage of a single tube enables users to customise the sound signature to their preference and, of course, provides that unmistakable texture.

SETTING UP
As mentioned, setting up for my two turntable cartridges was really easy. For the Hana ML, an impedance of 100 ohms and gain of 62dB was set, while for the Hana SL, I settled on impedance of 500 ohms and the same 62dD gain. Late in the review, I used my Denon DL S1 cartridge which had only an output of 0.15mV and even the highest 68dB gain setting was noticeably inadequate – this is hardly a critique of the Ultima as not many phono amplifiers have adequate gain for such low output cartridges.

LISTENING
The review unit was practically fresh out of the box and required running in before settling down to a stable sonic signature. I also noticed that for each session, it took about 30 minutes for the unit to settle in, before that there was a noticeable brightly lit and slight graininess to the sound. Not a major issue as most equipment exhibit such characteristics, but I’m highlighting it here because of the striking contrast to the sound of the Zeus Ultima when it settles down.

And what a sound it makes! Lush and full bodied with a wide open and deep soundstage. There was a natural bloom to the sound, especially in the midrange where most music resides. Voices were superbly natural and articulate and every nuance intended by the artiste was clearly heard. Diana Krall’s throaty breathy nuances on Like Someone In Love were eerily present. The opening double bass had body and weight, and yet kept the fine details of the plucking and sliding on the strings. There was also a very noticeable airiness to the sound which made the music seem very naturally floating and lifelike in front of the listener.

Next I had Donald Fagen’s Nightfly album spinning. The rhythm and the pace of this classic album played through the Zeus Ultima got the body moving and head bopping. There was a noticeable warmer sound signature, too, without losing any of the sparkle and thrust of the music. This encouraged me to bring out my reference, Cannonball Adderly’s Something Else, featuring the interplay between the bandleader and Miles Davis. The sounds of the trumpet of Miles and the sax of Cannonball were just nicely brash and brassy as they should be and were powerfully projected without being piercingly bright. A beautiful balance indeed.

The Zeus Ultima indeed made music sound alive with beautiful tonal truthfulness. To put this to the test again, I played Eva Cassidy’s Live at Blues Alley. I was literally transported to Blues Alley, such was the ambience created by the Zeus Ultima in the system. On the track What a Wonderful World, her voice was ethereally there in the room.

When I switched between the two cartridges connected, I also noticed how transparent to source the Zeus Ultima was. While both were Hana cartridges, the differences between the ML and the SL were clearly noticeable.

THE LAST WORD
The Tsakiridis Devices Zeus Ultima has a lot of competition in today’s market where phono preamps are outnumbering CD players models by a large margin. At its price level, I dare say it stands up to its lofty name. It is a highly musical machine with its delightful lush and airy sound, easy to use and live with, and will no doubt withstand future upgrades in the rest of the system.

I can easily see this phono amplifier as an end-game purchase for many audiophiles.