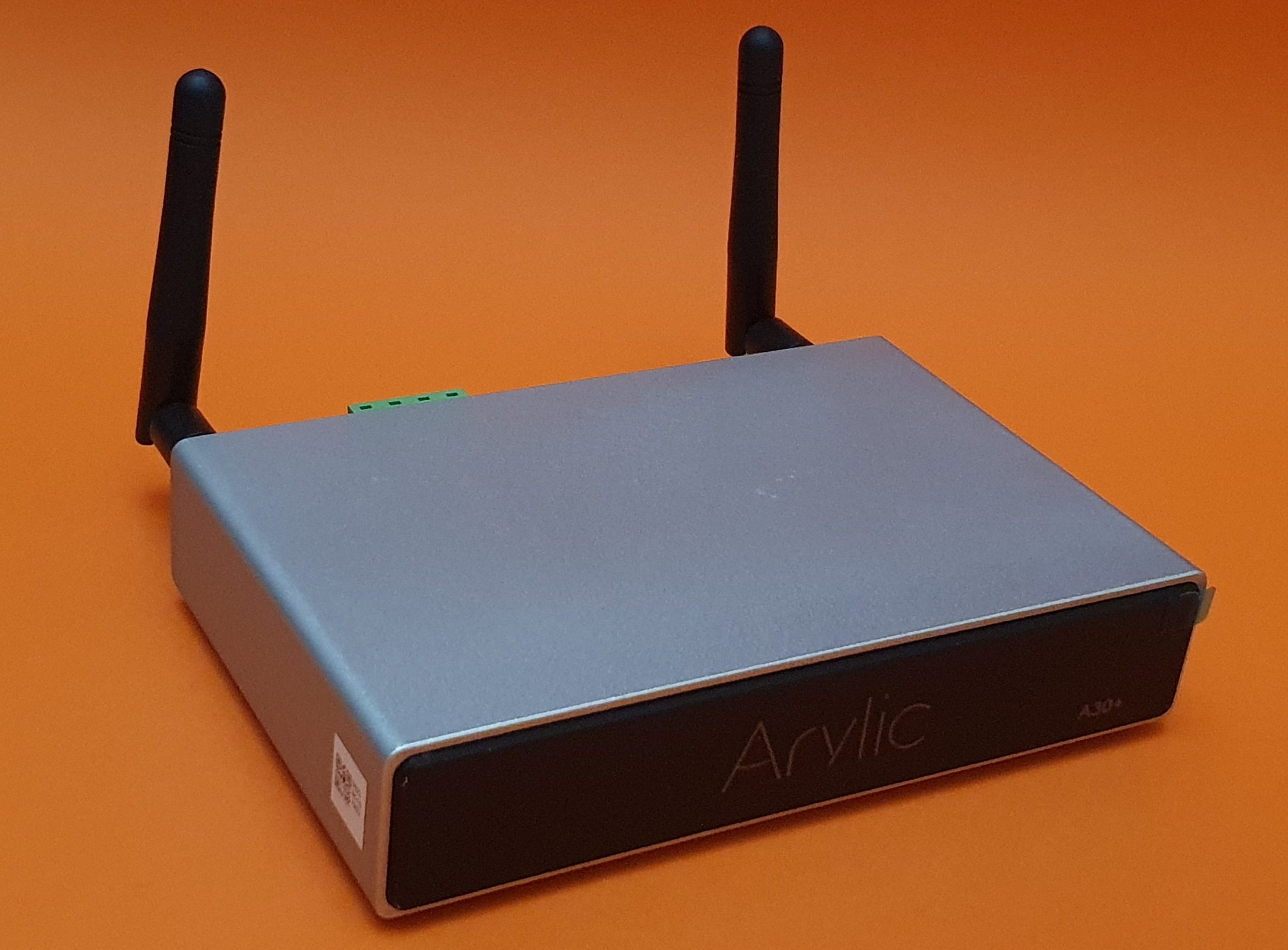 When looking for information on home audio, the signal-to-noise ratio is always low. Especially when you’re on a tight budget. You have to sift through so many bad products before landing on the one that ticks all the right boxes. Is the Arylic A30+ the amp that meets your requirements? Keep reading to find out because this is a long one.

There’s little information I could find online about Arylic except for their website. Looking through their product library, there’s an impressive amount of streaming products ranging from network sources to network amplifiers. There’s also an ACPWorkbench Tuning Tool and DIY audio boards for DIY-ers and tinkerers.

Being a DIY-er myself, I am loving the company’s direction. Their forte seems to be in networking/multi-room audio, like Bluesound and Sonos but at a much more affordable price.

Other stuff it comes with is a remote control, two antennas, a mini screwdriver, a male phoenix connector, a user manual, and finally, an RCA-to-mini interconnect. Mine came with the left and right channel reversed, so I had to swap the RCA connector around. I hope this was a one-off error.

Within the deceptively small backplate, there’s a plethora of connections provided – a Bluetooth 5.0 and a single-band 2.4G Wi-Fi antenna, a wired Ethernet port, USB-A for thumb drives, micro USB, 3.5mm analogue in, a barrel-style power connector, and finally a phoenix-style speaker connector.

The choice of speaker connector is quite interesting, I’ve never seen an amp use block connectors aside from all-in-one systems. I guess the designer needed to keep the size and cost down so no binding post or banana sockets here.

File format support is also as wide as the connectivity options – FLAC, MP3, AAC, AAC+, ALAC, APE and WAV. There is no information about the DAC chip it uses other than it can play music off your thumb drive, act as a USB DAC, and could decode up to 24-bit/192kHz.

There’s nothing else around the sides while the black front faceplate has a status LED that shows which source you’re playing – white for Wi-Fi, blue for Bluetooth, green for line-in, red for USB drive, and yellow for USB DAC (computer connection).

SETTING UP
Arylic’s networked products run with the aid of a companion mobile app called 4STREAM. Setting up was relatively easy though the amp could only connect to a 2.4G Wi-Fi band so both your phone and the amp need to connect to the same band. My phone was connected to the 5G band and it wouldn’t complete the set-up but once I noticed that detail, it was done in a pinch.

For the first few days of listening I was really unimpressed by the sonic presentation of the A30+. It sounded flat and confiscated, especially when I turned it up louder, much like other low-power class D amps. Modestly powered is definitely the right word to describe it. I decided to stop listening critically for a while because the presentation was fatiguing and instead used it with my computer speakers. While it was on multimedia duty, I got to explore the bundled remote and 4STREAM app.

The app is the only place where you can see any information except for the status LED. Because of this, I was never sure of my settings. The remote also has a button to turn off the status LED on the amp – which I find particularly funny. Now you can be entirely unsure about everything. It’s a playback roulette! Is it playing off Wi-Fi? Bluetooth? Line-in? Who knows!

The 4STREAM app also has some quirks of its own. One of them is the alarm clock function that, as it describes, turns your speakers into an alarm clock. Not only that, you can also choose the source for the alarm music. The list ranges from Tidal all the way to Amazon Music to Internet radio. Another quirk is the settings page which has no actual setting except for displaying your 4STREAM app version and a contact form to send Arylic your feedback.

But when it comes to actual networking functionality, it does so very well. The app allows you to add up to 12 zones (or 12 network players) in your multi-room setup, and it even lets you set a unit as a single channel – left or right – when you’re connecting two of them for a single stereo set-up.

4STREAM is a competent app but it doesn’t actually feel fully fleshed out. It does not have premium features like the more mature BlueOS that integrates with other third party smart home control systems. There’s also no support for other DSPs like Dolby. But at this price point? I won’t complain.

Moving on to the remote, there is power, mute, LED on/off, volume, play/pause, skip/prev, input selection, presets 1 to 6, Treble +/-, and Bass +/-. There’s also a d.bass button that turns the bass on and off; but in the user manual it was described as Deep Bass. It basically cuts off everything from the mid-bass and below. Interesting choice of feature and very quirky. Luckily there’s a Flat button that resets your EQ but it doesn’t affect Deep Bass.

TESTING
I connected the Arylic A30+ to my Q Acoustics 3010i and Elac B6.2 speakers. The 3010i is set up with my computer – toed in and tilted up as nearfield speakers. The B6.2 on the other hand is my main stereo set-up in the living room. This way I got to hear how the Arylic A30+ behaves in different situations.

Line=in was tested with a Matrix Mini-i, a Chord Hugo Gen1, a Hifiman EF400, and an EarMen Donald DAC to compare its built-in DAC with aftermarket ones at various price points.

It does not have any line outs so you cannot use it as a streamer preamp into a separate power amp or active speakers. If you’re looking for one of those, they do have other network preamps to choose from.

LISTENING
After several days of non-critical listening and letting it burn, I decided to give it another go at my Tidal library. The signature remained mostly unchanged but the sound opened up nicely, becoming less fatiguing; I had to edit this review a couple times because the amp continued to improve over time.

Paired with the Q Acoustics 3010i
The first song in my queue was Maybe It’s Time by Bradley Cooper from the A Star Is Born soundtrack. Something light and easy for warm-up always relaxes me and eases me into it. For the price, the Arylic A30+ rendered the guitar and the vocals pleasantly – with each of them in their own respective layers. There’s less of a reverb and decay making it sound less like a studio recording and more of a barstool singer experience.

Micro-dynamics reproduction is evidently low, and a lot of post-processing added during mixing (though subtle) was subdued and everything sounded quite acoustic.

The Arylic A30+ is a very dark and bassy amplifier, so metal libraries like Metallica’s self titled album sounded off. Electric guitar didn’t have quite the same crunchiness as one would expect from a more neutral amp. The whole presentation was damped and subdued while the booming drums dominated my room. I tried stuffing the rear bass ports and it helped with that nicely.

Soundstaging is average, with a strong centre channel when the album calls for it, like on It Takes A Lot To Know A Man from My Favourite Faded Fantasy album by Damien Rice. I could foresee the imaging would be a lot more solid and tangible if the amp were capable of reproducing higher levels of resolution. There’s a suspiciously hollow space between the left, centre, and right channel so instead of a wall-of-sound, the soundstage was presented in three blobs.

Paired with the Elac B6.2
It is clear that the Arylic A30+ is very bassy because the boom became unbearable as it reverberated around the larger living room space. I had to stuff the bass ports on the Elacs too to subdue it to manageable levels.

Considering it has a line in, I connected it to my Pro-ject RPM 6.1SB with an AT-51e cartridge which feeds into my Garrard MRM-101 phono stage. Starting off my listening session with Eye In The Sky by Alan Parsons Project (Arista AL-9599), the Arylic A30+ held its ground well and trotted on with no distortions. The three blob soundstage was no more and instrument positioning was also correct. Perhaps it doesn’t do very well as a nearfield amplifier.

I moved on to Blue Mitchell’s The Thing To Do record (Blue Note ST-84178). Now that’s more like it! On the track Mona’s Mood, the tenor sax has a great body to it, bringing a very sultry, mellow mood to the whole song. Trumpets did not extend as high as it should and the piano decayed way too quickly, but for the price, I could not complain.

There’s an intermittent ringing through my analogue chain, but because it is a phono system – being the finicky mistress it is – I’m not sure if I would put the sole blame on the amplifier.

Worth mentioning – the amp goes loud even with its modest power rating, but do expect reduced driving power if your speakers are low sensitivity.

Paired with various DACs
The amp was less fatiguing when I connected an external DAC to the amplifier. Both the EarMen Donald DAC and the Matrix Mini-i sounded closely similar to the built-in DAC, with the Matrix sounding slightly softer. The Hifiman EF400 on the other hand brought the presentation up by a notch or two while being the smoothest one of all.

I found the amp can be overloaded easily if your source is too loud. Both the Hifiman EF400 and Chord Hugo V1 caused the amp to clip during high dynamic swings, so adjust your DAC output accordingly. The Hugo also lent its brightness to the amplifier but the bass still remained boomy for me.

The improvement an external DAC would give to the amp was small so I don’t think it is necessary. If you do have one, even better – but you wouldn’t be using it as a networked amp at that point.

CONCERNS
I did stumble into an issue with the amp lagging behind the remote’s volume control. There were times when I would raise the volume and it got loud, but when I dialled it down it would go quiet and then jump back up in volume and reduce again. I could actually see the volume slider moving up and down from the app after no further input from the remote.

THE FINAL WORD
The Arylic A30+ is a great entry-level product if you want to litter your house with networked speakers at a low cost. Drop by your local marketplace, pick up a pair of used speakers for it, and you’re golden! This is not a product marketed for hardened audiophiles and as such it is adequate for its use.

For the price, there is no way you could beat the sheer number of functionalities it has. It’s too bad I don’t have smaller speakers because I have a sneaking suspicion that the Arylic A30+ was made for small speakers with recessed bass.