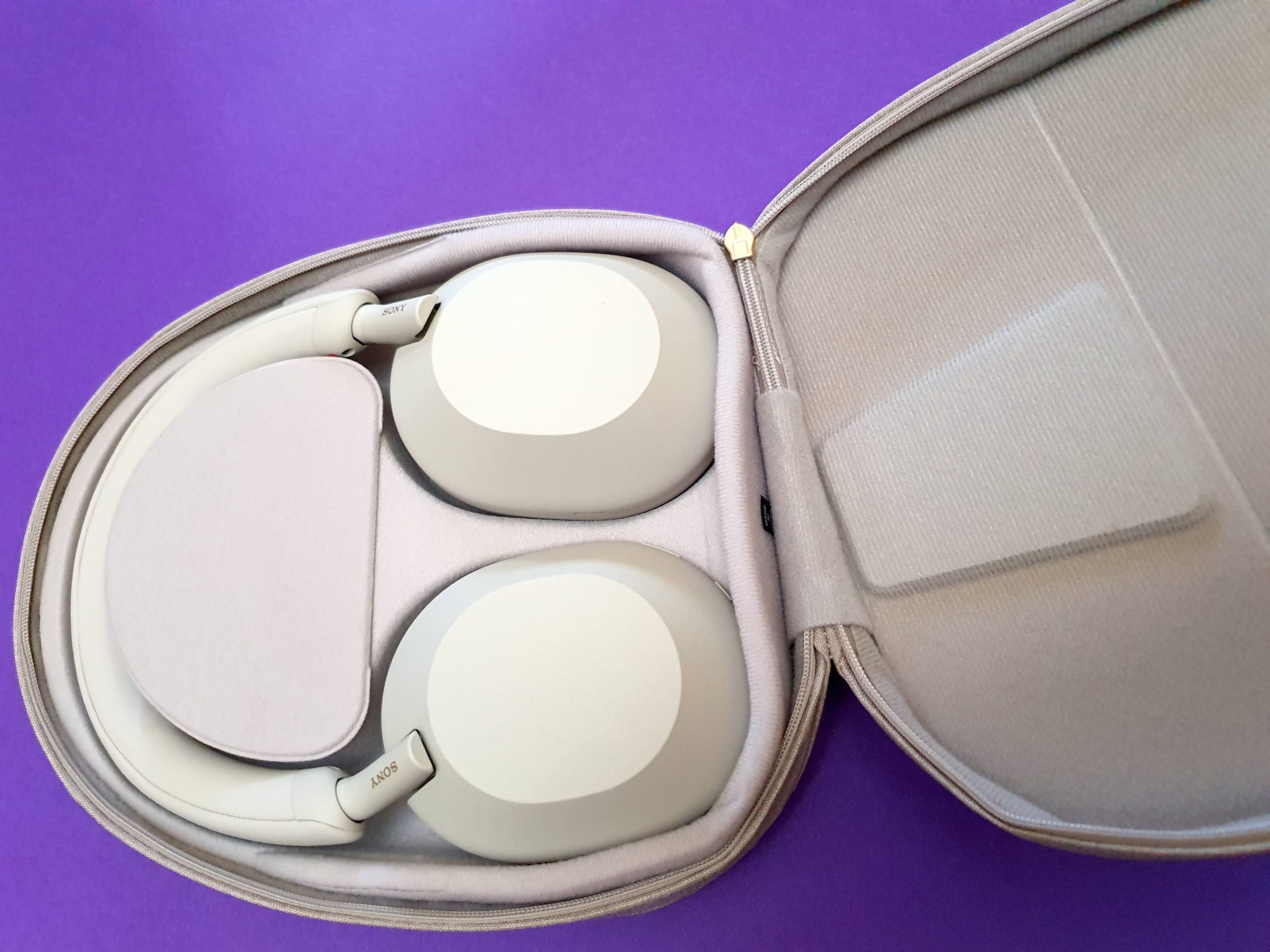 THE WH-1000XM5 represents the fifth iteration of Sony’s flagship active noise-cancelling (ANC) over-ear headphones. It also marks the biggest departure in terms of design since the inception of the series, with a revised hangar and pivot design which makes it look a little more “designed” and less “functional” than the previous look. No doubt the more polished competition from the likes of Sennheiser and Bowers & Wilkins have made this a higher priority as well as the advent of the more stylish Bose NC700s.

As it was with the previous XM4, it seems almost impossible to think of any substantial improvements that Sony could have wrought, but they have indeed taken their best shot at that – and with some success, though I feel some of these are a bit of a case of “two steps forward and one back’”. The key differences are in the physical design, but there have also been some key changes in the ANC, newer 30mm (vs 40mm previously) drivers based on carbon fibre material, faster charging and some subtle improvements in the digital sound processing. However, it’s hard to point to any major changes, and thus there was a challenge to tease out the differences.

Almost all the features of the XM4 have been carried over to the XM5 – 360 Reality Audio, the same LDAC, AAC and SBC codecs (but no APT-X, HD, LC or otherwise), a 3.5mm input jack for analogue sources, and an on/off/Bluetooth pair button, while the custom button has been renamed back to Ambient/NC (as on previous iterations). The USB-C input port down does PD fast charging, so a quick top-up will get the headphones back up in short order – even less necessary as battery life is claimed to have been further improved to up to 40 hours of use.

There is no USB audio connectivity unfortunately, which seems like a missed opportunity. Bluetooth connectivity has also been upgraded to a more sophisticated multipoint – where you can have connections with more than one device, but this doesn’t work with LDAC. Touch controls are on the right hand ear cup with the physical buttons on the left. Features wise, the XM5s carry over the Quick Attention feature, by which you can hear the outside world simply by holding your hand over the right ear cup. As with the XM4s, the XM5s have the “speak to chat” feature which toggles the attention mode on when you speak… very clever stuff indeed.

Also of note is that Sony has worked to further improve the microphone pick-up further with an extra pair of noise-cancelling microphones when using the XM5s for taking phone calls (or Zoom conferences). My casual testing did show a marked improvement in this aspect, though this was not how I used the headphones principally.

The headphones now come in Sony’s more sustainable packaging which is a nice touch, but the supplied carry case is now a lot larger given the fact that the XM5s don’t fold down as with previous iterations, making for a bulkier item in your daily commute bag. There is also a bizarre effort to make the case a bit collapsible with folds in the case so it takes up less space, but that doesn’t work very well and also doesn’t get around the fact that these headphones still take up more space in your bag with the headphones inside. This would definitely be one of the “one step back” issues with the XM5s.

There is a lighter finish – which is a light beige and also a darker blue/grey finish. I prefer the darker finish in general to hide potential stains and dirt, but both are handsome. I would still say that the likes of Bowers & Wilkins PX series or the Apple Airpods Max exude a more premium feel, but these feel about on par with the Bose NC700s in terms of feel.

There are a multitude of smart features accessible using the companion Sony Headphones App (which also support other models), available on iOS or Android. This is where you also can set up the smart features which will automatically switch noise-cancelling modes based on your movement, location and activity. You can also set up the 360 Reality Audio which involves taking photos of your ears to model an immersive audio environment. You can also customise the function of the buttons and also your Google Assistant settings.

There is no formal IP rating for these headphones, so it is not recommended for strenuous exercise or unshielded use in the rain. Comfort remains excellent, though I would say the XM4s have a little more top padding which suits my oddly shaped head better. Clamping force is sufficient to give good security to the headphones without being uncomfortable. Ear pads are even softer than before and space in the ear cups have been marginally increased, which is good for those with bigger ears.

LISTENING
I principally used the XM5s with my Google Pixel 6 Pro with Tidal app, though I also tested with an iPhone 13 Pro. I compared the XM5s vs Apple Airpods Pro as well as the previous XM4s.

Sony has definitely been working hard to improve the audio performance of the XM5s over the XM4s, though the general aural signature remains similar. The XM5s remain warm and approachable, with good transparency, though the midrange remains a tad recessed (so called “V” profile), which suits modern audio production. I did note that the bass was a little more nuanced and textured than with the XM4s.

I tested rhythmic ability first with the Tidal MQA stream of Dave Brubeck’s Take Five and the XM5s handled this with aplomb, easily on par with the XM4s, though not quite as good as the Airpods Max. Cymbal textures had sufficient air, while saxophone tonal colour and headstage were good, though again, the Airpods Max painted a bigger stage.

I continued with the same tracks which I used to review the XM4s – Herbert von Karajan conducting the Berlin Philharmonic in his 1963 rendition of Beethoven’s Symphonies (Tidal MQA stream). Again very enjoyable rendition, with good weight and scale to the orchestra. On LDAC from the Google Pixel 6 Pro vs AAC on my iPhone 13 Pro, there is an additional ambience and refinement from LDAC, but the difference is not night and day.

360 Reality Audio has been further improved on the XM5s – the extra detail retrieval from the new 30mm drivers enable an even more “out of the head” sound. On Alan Parson’s Project’s Eye in the Sky, the sense of “height” and sound from the “rear” was further enhanced vs the XM4s. I also auditioned the 360 Reality Audio mix of Miles Davis’ Kind of Blue – again, the projection of height and space was even more convincing (even though this is a largely artificial construct, given that this is originally a three-track recording).

I rounded out my listening with my iPhone 13 Pro feeding my Apple Music curated personal playlists, so a lot of the music was not familiar, but it did showcase the ability of the XM5s to cross genres and present all of them enjoyably. The DSEE Extreme processing does help present compressed music streams in a very enjoyable way, improving dynamics and perceived detail. I would also note here that the comfortable aural profile enables you to listen to less-than-perfect recordings.

On noise cancelling: The XM5s take noise cancelling further than with the XM4s, though I would say that we are really in diminishing returns territory – there is a little more hush and the the automated switching between levels of noise cancelling is more intelligent based on your movement, position and type of noise surrounding it. I didn’t have a chance to try this on an aeroplane, but I suspect that it would do well. But I did try them in a noisy cafe and the XM5s can create that personal bubble of “hush” very well. The speak to chat and attention features work well too, though that can often be one of personal preference.

On the analogue input: The analogue input remains a good way to listen to wired devices (say on a plane, or a DAP) and the Sony’s 3.5mm input jack and supplied cable are an easy way to do so. I tested the XM5s with an iPod Touch and the input remains true to the input, but switching to AAC on Bluetooth from the same iPod actually sounded a touch more dynamic.

Comparison vs XM4s
From an audio point of view,, the XM5s represent a continuing evolution of the XM4s already excellent performance. The XM5s are a touch more noble, especially in the bass, and retrieve a bit more detail and ambience. But for some reason, the XM5s have a slightly more recessed midrange for me, though the difference is marginal. Headspace remains good, though competitors can project bigger soundfields.

If you already have a pair of XM4s, I would say that it’s not a must to upgrade, though for those with XM2s and XM3s or even the original XMs, the XM5s represent a significant upgrade. Note that the XM4s remain available and at a discount.

Comparison vs Apple Airpods Max
The Airpods Max project a wider, deeper and taller headstage, with a slightly more textured bass. However, I think the XM5s do have a more easily approachable sound, and are a little more comfortable, mainly because of the lighter weight. While the Airpods Max are significantly more expensive, they do look and feel more premium.

CONCLUSION
The XM5s represent the best of this category of over-ear ANC headphones, but this field is even more competitive than ever. Apple has entered the fray with a super premium offering, Bose has come back with refreshed offerings, and Bowers & Wilkins has refreshed the PX series. But the XM5s’ most serious competition actually comes from its predecessor, the XM4s which still remain available for lower price points. Although the XM5s are improved, some of its design choices are arguably not as optimal e.g. the removal of the ability to fold.

Thus the XM5s are recommended in and of themselves – no one who buys these will feel that there is anything missing, though I would say that it is important to audition alternatives, especially the XM4s which may represent better value.