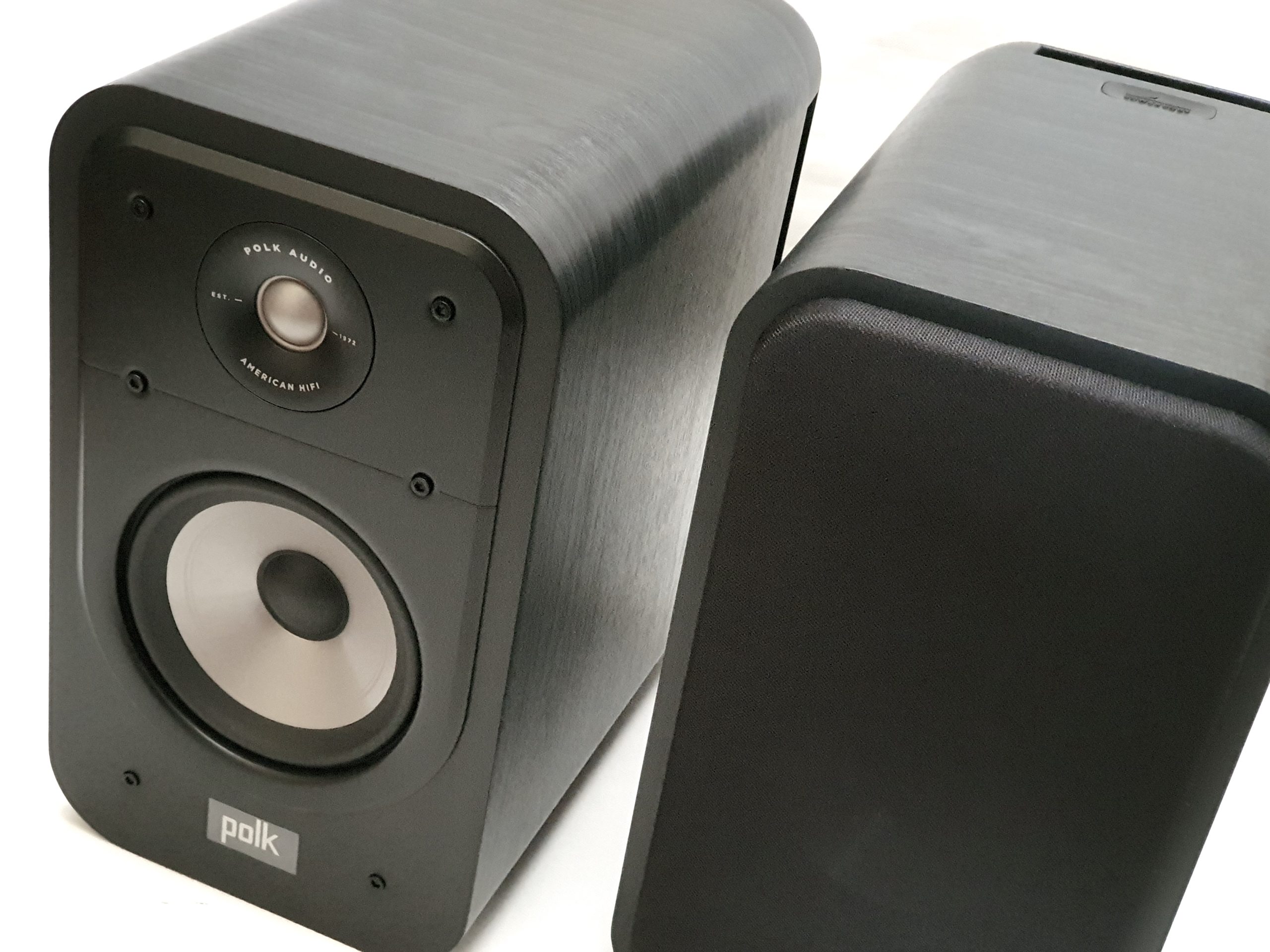 Inflation. No, not the kind which causes real life worries – we all face the challenge of rising prices of essential goods and services, so nobody’s here wanting to read about that. I have in mind the less significant kind, such as names or titles that have to be souped up to make things sound grander (whether or not there be any actual elevation in status/value).

The previous generation of the Polk Audio ES20, was termed “bookshelf loudspeakers”. With no change in cabinet size from its predecessor (the S20), the carton of the ES20 now states ““”large bookshelf loudspeakers”. The name change from S20 to ES20 seems to be to make the newer model sound more elitist. Literally. The S20 was in Polk’s “Signature” series, while the replacement ES20 now gets bumped up to being “Signature Elite”.

In terms of description of the special sauces poured into this new model, little also seems changed from the previous one’s. Each ES20 cabinet sports drivers which are described as a 2.54 cm Terylene (a polymer type) tweeter and a 16.5 cm mica-reinforced polypropylene woofer. Also present is Polk’s Patented “Power Port Technology” which is claimed to deliver 3dB more bass output than other conventional ported speakers. This manifests itself as an outboard plastic back panel bolted to the rear of the cabinet, with a tapered protrusion going into the centre of the rear port for directing the exiting airflow. I didn’t try removing these to do any “with” and “without” comparisons, though.

As stated earlier, these are “large bookshelf speakers”. Dimensions are quoted as 37.59 x 21.59 x 35.05 cm (h/w/d), so this is clearly no tiny shoebox in the LS3/5A tradition. Weight is also quite substantial at 7.7 kg and given the dimensions, do ensure the top plate of your chosen speaker stands can accommodate their footprint (you weren’t seriously expecting to place them on bookshelves, were you?). I had two pairs of 60cm stands at hand and found they soundly preferred the quad- rather than mono- pillar ones.

As I grow older, I seem to have become pickier about hi-fi gear’s aesthetics. While nothing offended the eye, I did not really warm to the large black-finished chamfered cabinets of the review sample. I understand they also come in all-white and faux woodgrain finishes. Given their size, you may wish to first consult your Minister/Secretary of Domestic Aesthetics if you need to place them where (s)he has sight of them.

In terms of placement, the ES20s were auditioned both in a small room near-field setting about 35cm from the front wall, as well as in a more open-plan setting with its back both close to and also when pulled away to about 90cm from the front wall. I felt them to be at their best with only a slight amount of toe-in. They were less prone to getting boomy than some of the other rear-ported models I had experienced.

The quoted sensitivity is at 88dB, and in practice the ES20s did not seem to demand a lot of power to put out healthy SPLs. My usual 35W Class A tube-hybrid amplifier and an old 50W Pioneer A400X (which had never really convinced me it was able to put out its rated power) used in the auditioning had no problems driving them.

LISTENING
Listening impressions quickly became favourable – the ES20s sounded weighty and full-bodied with good scale. They may be standmount “bookshelf” speakers but they have cabinet size on their side and use it, though not in a heavy-handed way. They were just very even-sounding with nothing really sticking out to draw adverse attention but were also never dull or lacking sparkle.

The midband was open and clear with good separation and allowed voices and acoustic instruments to sound quite natural and expressive. Dave Gahan’s vocals stood out from the instrumentation in Depeche Mode’s John the Revelator, and the nylon and steel string guitar plucks and strums on the Kings of Convenience’s Quiet Is the New Loud LP felt true to life.

Detail is there, just not presented in an overt way. For example, the softly-voiced count-in preceding the start of Christine Collistor’s cover of Who Knows Where The Time Goes on her Love album, and the wind sound effects on Amelia from the same LP, were easier to hear via the more expensive Elac BS U5. The Elacs also demonstrated subtler articulation of Richard Thompson’s voice in his live take of Shenandoah but this was still well reproduced via the ES20s.

When it came to more lively material, the bass came replete with good timing and sense of forward momentum. This allowed things to sound more substantial, with overall drive sounding fine. Okay, some may have pined for a subwoofer to augment bass extension, but what’s there raw, was indeed impressive. Treble was nicely extended, the brass and other wind instruments on Wynton Marsalis’ Hot House Flowers album sounding good for a loudspeaker in this class. It may not have the transparency of a ribbon or compression driver up top, but that polymer tweeter acquitted itself nicely.

Imaging and presence were also strong points of the Polks, as was the sense of retrieval of hall ambience and atmosphere with suitable recordings. I’d call the ES20s consistent, cohesive all rounders that put out a potent punch when called on to. They sounded engaging when played soft, even if they did like going loud. Heck, they were even enjoyable listened to while moving around doing domestic chores. These are not “lose interest as you leave the sweetspot” loudspeakers in the way of my longtime Apogee Centaur Minors, as an extreme example. Like their Rega Kyte rivals, when those were previously here, the Polks didn’t have me hankering to go back to my own regular speakers in a hurry (the Kytes and Polks should be about the same price in Malaysia, the Rega a little cheaper based on list price).

But wait … there’s more! The Editor also provided me with a pair of the older Polk S20s to see how the new differed from the old. While the two sounded similar overall (surprise!), the new ES20s were cleaner in the treble and had a clearer midband, and did seem to sound firmer and better integrated. I felt treble detail to be improved, noticeable on how the ES20s conveyed the shimmer of lightly struck cymbals and sustained high notes of soprano saxophones. No, it wasn’t Kenny and, yes, I did sit a little closer to the drivers of each over several turns, listening out for differences, which nobody would normally do listening for enjoyment. Polk’s engineers have produced results, and that’s what counts.

THE LAST WORD
Polk say to their prospective customers: “Expect Great Sound”. No Last Jedi-esque subverting of expectations here! The ES20s are highly enjoyable on rock and pop material, but are also up to the task when asked to reproduce recordings where conveying the artistes’ little subtleties are required to better appreciate the musical message.

Competition in their sector is tough, but they have the sonic chops to woo you. Recommended.