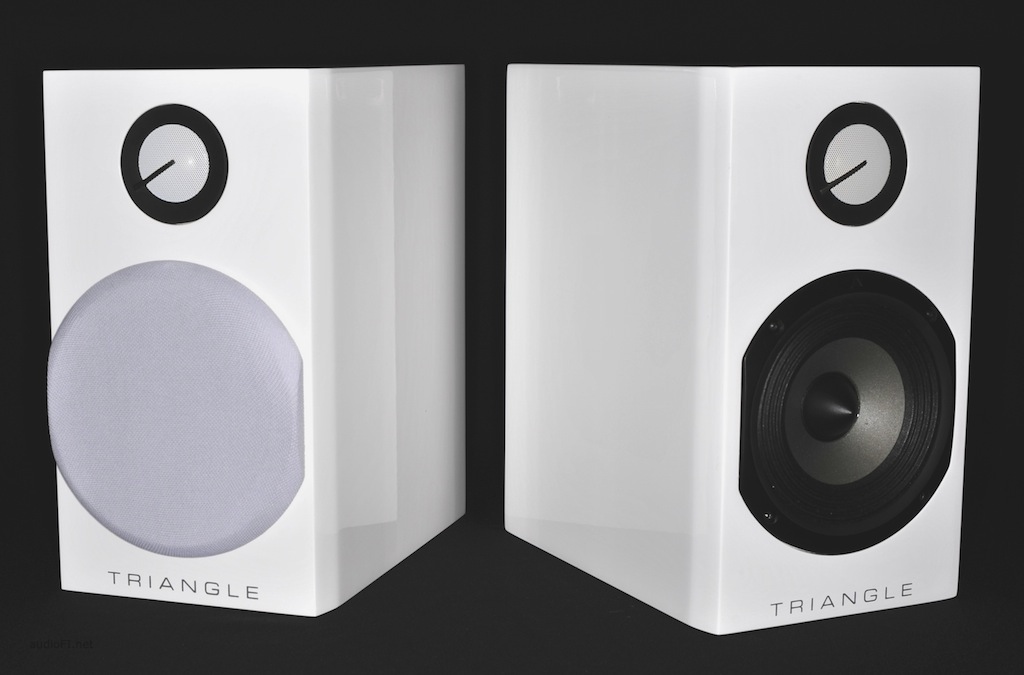 First impressions: Visually striking in bright gloss white – almost as if Triangle intended to show those detergent manufacturers’ marketing men what the real thing is when it comes to “whiter than white” (or should that be “iPod-matching” white?).

If you’re familiar with this French manufacturer’s wares, the sonic virtues will be immediately recognisable – fast, engaging and attention-holding, letting the joie de vivre (hey, they’re French speakers after all) of the music flourish.

Specs: This compact bookshelf speaker is a two-way design that uses a 2.5cm titanium dome tweeter and a 16cm doped paper cone woofer. Given its 90dB sensitivity and nominal impedance of six ohms, not a particularly difficult drive, Triangle quoting its power handling capacity at 50 watts. Bass extension is limited at 80Hz, but the other end extends to 24kHz. Just a single pair of terminals are provided at the rear, and the cabinets measures 29 x 16.5 x 24cm (h/w/d) and weighs 4.5kg. The high gloss finish is standard, coming in black, white and red for now, but with promised of more options. Performance: These little babies conspired to sound at all odds with their size. Midrange projected outward with fine tonality and sense of detail, giving singers a solid sense of presence. While real weight and extension were obviously absent when compared to a big loudspeaker, you don’t get the impression of a little speaker trying too hard to sound big – it somehow pulls this trick off comfortably.

Music comes out fast and, where appropriate, furious, demanding one’s attention – these are not loudspeakers for background listening while you read some mundane report you brought home from the office.

I played a CD with some low frequency test tones but never heard any overt resonances from the cabinet which, while not of the ultra-heavy and damped variety, stayed well behaved and as neutral as one can expect a relatively low-priced wood (or wood-derivative) box to be able to.

Treble purity has been much improved since the early days of the brand (I was a long time user of its early ’90s floorstander model, the Ikoto), making it less demanding of amplification quality when it comes to this area. But feed it with a less-than-capable amp and sources and it’ll let you know of your folly without pity. You’ll need the best you can muster – this is a very revealing design … and not just for the price.

While I wouldn’t ever call them brash or fatiguing, the overall balance may still be a little more toward the “French and German” school of loudspeaker sound than those who seek the classic BBC or British flavour, or even early Italian Sonus faber-esque virtues, may like. Go listen to its obvious European rival, the Sonus faber Toy, which sounds quite different (from my memory), and see which you prefer.

The good: Packs a surprisingly full sounding bass for the size. Treble has a slight prominence, but in a positive way that’s not perceived as unnatural brightness, helping these speakers throw out a ‘wide bandwith’-like sharply focused delivery (which should not be troubling, unless your amplifier has limitations here in terms of tidiness, or just plain prefer a more reticent delivery).

A good sense of stage depth and even height were also major strengths (provided you place them on taller than average stands – 30-32 inches is about ideal by my reckoning). Position them judiciously and you will be rewarded with kick drum and plucked bass reproduction with faithful warmth and punch up to the point one has any right to expect from such tiny drivers in a puny box. The ungood: Let’s get the obvious out of the way first: bass hounds and rock nuts are not going to sell their big JBL or Cervin-Vega monsters, or what-have-yous, for this little tyke. And if your idea of a good looking loudspeaker is limited to one clad in well-lacquered wood veneer (maybe with some leather thrown in), no amount of coloured gloss will do it for you. Look perhaps, at Triangle’s Zeta, which has more earthen tones.

Final verdict: If the overall balance is to your liking and you have a system that’s up to it, these babies are set to thrill. These bookshelf speakers sounded much better to me with stands taller than the usually easily-available 24-inchers, so be prepared to experiment here.