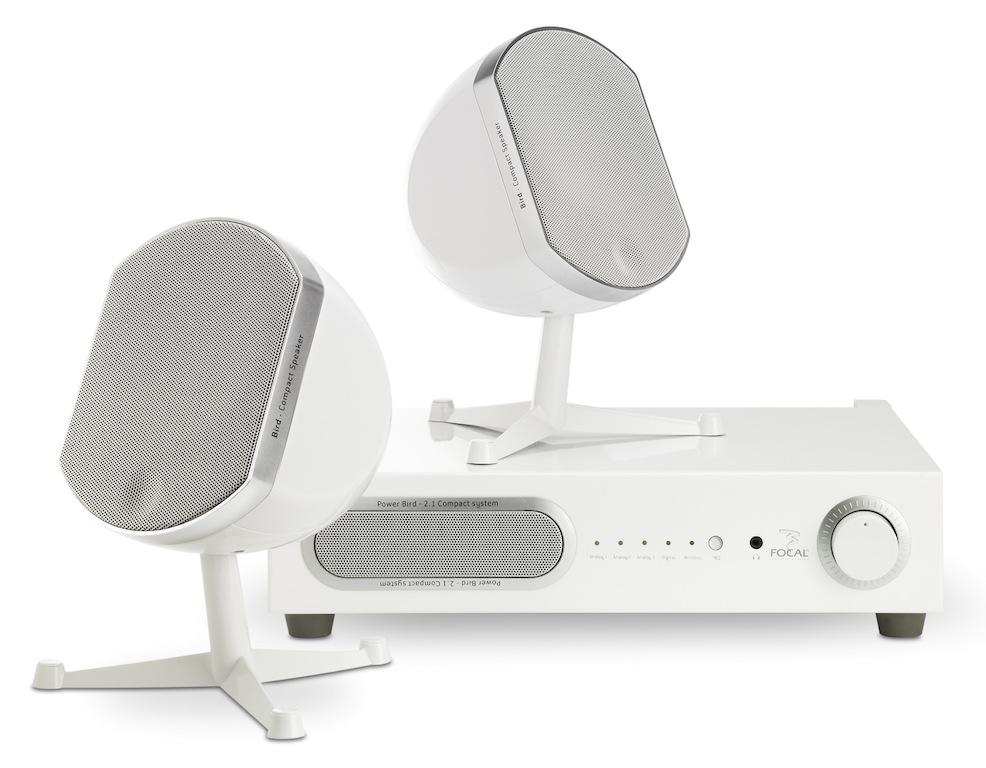 First impressions: Not much in the way of expectations save for the brand name … seriously, this ensemble comes from the same guys who gave us the gob-smacking, awe-inspiring 260kg Grande Utopia EM!

Unboxed, the Bird system was even more of a surprise. All glossy and business-like, the speaker pods and control console seemed very well fitted together with more than decent ergonomics. This would definitely be welcomed into the home without raising any eyebrows from the significant other. That in itself speaks volumes after the flack that came my way dragging in a pair of Maggie 1.7s into the house.

Set-up was a cinch with nary a problem. Everything needed is in the box, including Focal speaker wire. That being said, the LEDs on the console are ultra brilliant – not entirely soothing on the eye for night/low-light use.

The remote control unit seemed a tad small and overall usage was sticky – you have to jog through the input options via the remote as the Power Bird unit does not feature manual input selection buttons. Not too much of an issue, though, if you only have one or two input sources.

But the surprises kept on coming. Something this small ought not to sound so big and definitely not so engaging. This definitely warranted more listening. Frequency response ranges between 70Hz and 25KHz, with sensitivity at 89 dB and eight-ohm nominal impedance. The stands incorporate multi-axis ball-and-socket joints and allow for placement on table tops, racks, or wall mounting for that matter.

The business end of things resides in the Power Bird module, incorporating an all-in-one integrated amp/DAC/woofer offering. There’s a fair bit of flexibility built in with three analogue inputs and two digital inputs (one S/PDIF coaxial, one Toslink optical), and pushing out 80 watts for the built-in downward firing 16.5cm paper cone woofer and 35 watts each for the stereo Birds.

Surprisingly for a 16.5cm driver, the Power Bird’s stated frequency response has a floor of 42Hz … more on that shortly. Uncompressed streaming using Kleer technology is incorporated with a wireless emitter for iTouch, iPad or iPhone.

I’d would have been keen to find out more about the specifications of its DAC but Focal is mum on this as well as the amp section, which I assume to be class-D or some equivalent given its uber cool running. All, in a box weighing in at 6.8kg and measuring a compact 105 x 430 x 349mm. The same Power Bird module will allow you to harness different Focal Bird speaker modules (Little Bird and Super Bird on either ends of the scale). Performance: The Birds just punch way above their weight and size. They sound bigger than the diminutive proportions may suggest – though we’ve seen this parlor trick played by other competitors, the Birds come away sounding full, integrated and rich.

They availed themselves with both movie and music material – be it Transformers: Dark of The Moon or Adele – Live at the Royal Albert Hall, the Birds just sang with a sense of refinement and clear presentation of the acoustic space, which is sometimes missing from even bigger systems.

Bass performance was surprisingly tactile for a little 16.5cm driver, with a full, though not trouser-flapping lower-end. I did end up listening to fair bit of bass intense music and to be fair, you’ll be able to cover most of the audible frequency spectrum save for the extreme bottom.

The caveat to this comes when there’s over-exuberant application of the volume knob – the overall presentation gets edgy and harsh in a hurry. Mind you, arriving at this sorry state would entail quite a fair bit of flogging, which may not bear well with the state of your hearing or the well being of your neighbours.

The interesting thing about the Bird ensemble isn’t so much its individual parts but very much so the sum of its parts. The sonic synergy that rolls off from the separate preamp, DAC, amp, speaker pods and woofer just invites the listener into the performance. Alchemy? Perhaps not, but very satisfying nonetheless.

The good: I could readily see this mini-rig at the heart of an second or tertiary AV system where aesthetics and sonic performance square off against space, or the lack of which … perhaps in a den/rumpus room or home office?

The ungood: As refined as it sounds, the laws of physics definitely come to play given its compactness. When pushed beyond its comfort zone, you’ll be the first to know.

Did I mention the dinky remote?

Final verdict: There are definitely other options out there and for less coin to boot. But for the audiophile or person who appreciates quality, this package offers a truly engaging and fun compact playback system for pretty much anything. MK Chong, a rehabilitated ex-investment banker, still doesn’t get out or see the light of day much. When he does, he has a passion for the finer things in life – family, single malt whiskies, food, cars, music and cool gear. He believes there’s more than one way to nirvana and that just because everyone says so, doesn’t make it so. Currently, he’s re-discovering the beauty of planars and tubes and believes in the inescapable future that is digital.