First impressions: In the deepest recesses of my mind, I was wondering whether we’d reach a point where something gave. I’m talking about Audio Physic’s latest entry-level offering – the Classic series of loudspeakers. We’re all too familiar with the term “entry-level” and the inevitable connotations of compromise. Would Audio Physic finally over-stretch in the attempt to balance price and a legacy carefully built over the years?

That said, the floorstanding Classic 10 surprised me with what I can only imagine to be a refreshed take of the German company’s design philosophy. The family sound was immediately recognisable, displaying a pleasing sense of honesty with the combination of back-to-front and top-to-bottom wholesome integration that not many others can pull off as effortlessly.

Specs: Slated as replacement for the Yara series, the Classic 10 is part of a five-model line-up comprising two floorstanders, a standmount, centre-channel and matching subwoofer. Everyone offers 5.1 solutions these days and Audio Physic can’t be faulted for succumbing to the pressures of marketing demands.

Tall. Slim. Beautiful. These speakers visually captivated from the word go, from looks and, upon closer scrutiny, the standard of fit and finish. Construction is of a very high standard. The review sample came in high-gloss glass white finish, and I was informed that a black equivalent, together with the more traditional wood-variant are also available on order. 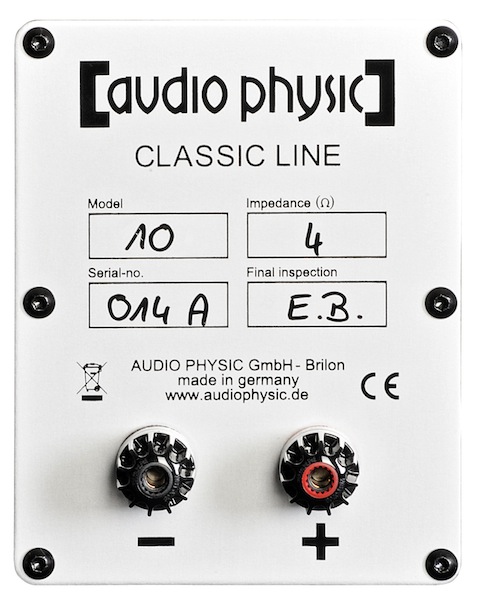 Design-wise, Audio Physic breaks no new ground with the Classic 10, relying instead on a proven standard two-and-a-half-way configuration. The driver array is D’Appolito style with a symmetrical layout. Cabinet construction is sandwiched, with the bass reflex ports integrated into it. A nice touch of class is the interchangeable front panel, which can either be open or covered in fabric. I left the panel covers off, preferring to have the drive units on display throughout the review.

The Classic 10 measures 1055 x 170 x 240mm (h/w/d), the height enhancing the perception of svelteness when having a pair sited out in the open. The quoted frequency response of 38Hz to 30kHz is quite standard fare these days, although the 4-ohm load may prove to be a bit tricky for some amplifiers. That said, quite a few mainstream amplifiers are 4-ohm-stable these days, so that’s a minor niggle.

The 16kg weight per cabinet only adds to the sense of assurance that money is well spent in all the right places when it comes to delivering sonically.

Performance: The dealer’s caveat while we were loading my car with the boxes was that speakers were brand new and without any play whatsoever. A pair of the costlier Classic 20 was being run in at the premises at the time, and they sounded very promising. High hopes then for the Classic 10.

And how they delivered. I am pretty familiar with the fundamental Audio Physic sound, owning a pair of Yara 2 Evolutions myself. Immediate impressions of the Classic 10 were one of familiarity but on a much larger scale. Things that the resident Yaras did so well were amplified several times. Of worthy mention was the sense of integration in the mid-bass, the Classic 10s revealing an exemplary sense of spatial cues and textural layering of instruments across a wide variety of genres effortlessly.

The feeling of the Classic 10s opening up even more over time was not as dramatic as other components I have come across; these Audio Physic speakers, just like their elder siblings, sing sweetly right out of the box and after a day or two, settle into what you would eventually hear.

Throughout the duration of the review, I found myself taking a step back several times to assess this new-found degree of lucidity, whether what I was listening to were genuine improvements or audio hyperbole. With hindsight, I didn’t think it was an issue of the latter – the Classic 10s were simply much better in most conceivable ways than my Yaras and can quite comfortably show a clean pair of heels to loudspeakers from other makes within the price range … and perhaps a notch or two above them as well.

The good: I was also impressed with the Classic 10s’ low-end extension. The baby Audio Physic goes low and clean, with hardly any traces of overhang, and the well-constructed chassis no doubt helped damp any amount of ringing that could have been audibly measured. Together with this, I didn’t find the speakers voiced to favour any specific frequency, unlike some of the smaller bookshelves which emphasise the midrange. Tonal neutrality kept cropping up in my review notes instead.

Second – while my experiences with Audio Physic speakers find them to be relatively fuss-free with respect to positioning, you would do well to put a bit of air between the Classic 10s and room boundaries. The solid bass anchor that the pair is able to lay down has a mild tendency for bloom if placed a bit too close to extremities. In my small-ish study, the Classic 10s just about got away with it but I would roughly say a metre’s distance from the rear walls and a foot at least from the side walls will be the barest minimum. From then, it becomes a matter of preference and fine-tuning.

Final verdict: I recently sold a pair of mountain bikes to friend with the intention of finding a replacement, having used them for a couple of years. The funny thing about gear is that you’re almost automatically predisposed to replacing them after a while with something a bit more contemporary and/or with options that are markedly better.

The Classic 10s are exactly that – they take loudspeakers to a new baseline, at least where the entry-level is concerned and arguably shift goalposts in the contemporary context, even when pitted against others of higher stature. Foibles notwithstanding (and really – I was very hard-pressed to find anything much against the Classic 10s), this speaks volumes of their overall value proposition. Get past the sticker price, and they’re actually exceedingly good value indeed.

And back to my mountain bikes – I’m still looking around for suitable replacements. Suggestions would be welcome.

Loudspeakers, Reviews
McIntosh McAire – made for the ‘i’
Rega RP8 – the grand evolution