THIS has quite possibly been one of the worst kept secrets of the hi-fi industry in recent months – the Rega RP8 turntable. Well, no need for any more speculation or second guessing, we have the official document and photos, so feast your eyes on the most striking turntable Rega has ever made.

As Rega watchers would have predicted, the RP8 is ostensibly upward-engineered from the RP6, reviewed here recently. The RP8 features a new plinth, platter and tonearm (the RB808), and is partnered with a 24V, low-voltage motor. A custom version of the older Planar 9’s hub bearing assembly is also found here.

According to the Rega literature, the RP8 marks the biggest step forward in the evolution of head honcho Roy Gandy’s turntable design philosophies. Controversial as they may be, one can’t argue with a company that’s shifted thousands of turntables over the past three decades and continues to intrigue a new generation of vinyl explorer.

The RP8 is the first of what Rega calls its “skeletal” design turntables.

The dual brace technology to increase rigidity between tonearm mount and main hub bearing, as featured on the RP-6, is taken a step up on the RP8. Two different materials are used for the stressed beam – the top layer is magnesium and the bottom layer is phenolic, which Rega touts as two of the lightest and stiffest materials available. This lowers any propensity to pick up airborne vibrations.

Rega’s plinths have traditionally featured a stressed skin structure, and on the RP8, a new material is used for this, produced from thin phenolic skins sandwiching a featherweight nitrogen-expanded, closed-cell, polyolefin foam core. The material was developed exclusively for Rega over a three-year period. The RP8 plinth is seven times lighter than the original Planar 3 plinth, and much stiffer in the crucial area between the arm and main bearing.

The three-layer glass platter is a “super-flywheel effect” design, made in collaboration with an emerging British glass engineering outfit. What this means is that three precision-engineered glass rings of different sizes are laminated together, keeping much of the mass along the outer rim and the inner rim light. Rega has eschewed high-mass platters and this method, it says, allows constant rotational speed without stressing the main bearing. 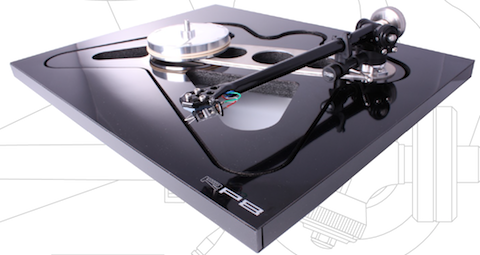 The RB808 tonearm, which uses Rega’s latest arm tube, has improved bearings and a tighter spindle fit tolerance than its predecessors. There’s a brand new vertical bearing assembly and the tube has been designed to redistribute mass, and further reduce stress and resonance. The arm also comes with Rega’s proprietary low-capacitance phono cable, which has an advanced phono plug assembly to enhance connectivity and keep the signal path as clean as possible.

The TT-PSU power supply included in the package uses a high-stability, crystal-locked, low distortion sine-wave generator. This, working with an efficient drive amplifier fed from a stabilised DC power supply, generates a 24V AC-balanced signal of less than 0.05% distortion. The unit is unaffected by any changes in the mains/line voltage and conditions.

The RP8 is shipped without cartridge, and will retail at £1,600. Punters can also opt for it to be fitted at the factory with the Apheta MC cartridge, which Rega says is the perfect partner for the RP8.

Stay tuned, we will procure a unit for review as soon as one is available. Until then, keep those black discs clean…