WIRELESS speakers … the final frontier of the digital era. There’s still much to be unravelled, but those who want their audio system to be totally cable-free will be glad to know that routes are being charted. Take, for example, the Monitor Audio WS100 wireless audio system, comprising a pair of five-inch cuboids with onboard amplification, wireless receiver and transmitter dongle.

Nothing complicated here, Monitor Audio assures those who can’t press a switch without a fuse blowing somewhere – just place speakers where you want them to be, plug in the USB transmitter to your music-loaded computer, and you get clean wide-band uncompressed audio … CD quality sound, wire-free. Configuration on the computer is automatic, no need for any software. The built-in amps deliver a total of 60 watts of power, enough for many.

Yes, the WS100 is made for music fans whose source is a desktop, laptop or smartphone. It uses custom-designed tweeters and mid-bass drivers based on the proprietary C-CAM transducers seen on Monitor Audio’s flagship hi-fi speakers. C-CAM, a material derived from the aerospace industry, is very light but rigid, and able to reproduce best-in-class highs and dynamic lows accurately and effortlessly. 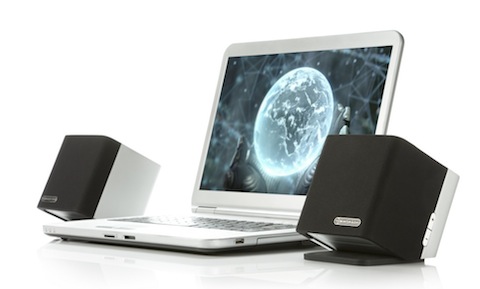 As for the wireless technology, this is what the company states: “A crucial element in the WS100 chemistry is Monitor Audio’s use of SKAA™ wireless transmission. Integrated with each DAC is a specialised wireless receiver, employing a very high quality digital audio protocol to transport audio from source to destination without compression. Operating in the 2.4GHz band, it protects the lossless signal from other networks with a patented Walking Frequency Diversity™ (WFD) technology, which uses sophisticated and seamless channel-hopping to eliminate clicks, pops and dropouts.”

Bet you really didn’t want to know that … but what it means is that you don’t have to worry about the interference usually associated with wireless systems.

Oh, about that “wireless” bit … you will need to power the speakers, and this is achieved via a single mains connection. Once the transmitter dongle is plugged into your computer’s USB port, up to four WS100 systems within a range of 10m can be employed for use with the same source.

A nifty and small remote unit controls power, play/pause, track up/down volume and input selection. Oh, a 3.5mm mini-jack input is provided on the back of the WS100 to accept a wired connection from your iDevices. Volume can also be set via a touch panel on the side of the WS100.

As for durability, each cube has a rigid die-cast metal shell and weighs a hefty 1.7kg … Monitor Audio says there is no cabinet resonance. The contoured cubes are finished with scratch-resistant polished glass top panels. A magnetic pivot system allows each speaker to be tilted backwards.

The WS100 is expected to retail at £250 and will ship late October. Now, here’s hoping bigger cubes are on the way for those who believe that size is all that matters … 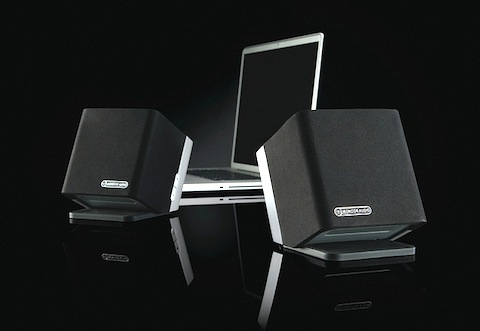