EVER wondered how manufacturers name their products? Do they have a team just to think up names? However, Sweden’s Jenvig Technology AB, which makes Supra cables, keeps it simple – this particular product is simply called the Supra USB 2.0 Cable. Nothing fancy here.

The Supra USB 2.0 is a flexible cable with a dual screen to provide protection from unwanted RF interference. The design includes two twisted pair of screens, one for signal and one for power. It is also claimed that this design is suitable for long runs as it has low capacitance and efficient noise rejection. It is available in 0.7m, 1m, 2m, 3m, 4m, 5m, 8m, 10m, 12m, 15m lengths.

Both the A and B USB connectors are 24K gold-plated and fully shielded. The design also employs PE-insulated wires with correct 90-ohm impedance.

The Supra is compatible with USB 2.0 and 3.0 sources but, of course, the latter is not usually used for audio. This cable can handle high-speed 1200 Mbps data transfer up to 15m. 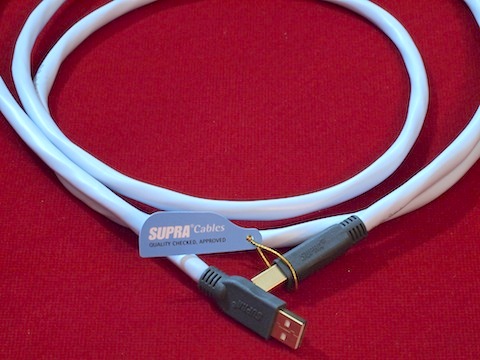 When I plugged the cable into my Window-based PC and Musical Fidelity M1 DAC, the first thing I noticed was the extra punch of the kick drum and tomtoms on the track Jeritan Batinku by Azlan & The Typewriters (originally by P. Ramlee). The drummer in this band is known to be adventurous even on simple songs. The Supra cable delivered the punch and speed when reproducing each beat of the drums.

After using it for more than a month, it was very clear to me why this cable is being raved about as a “bang for buck” upgrade for computer-based audio systems.

I play a lot of heavy metal music, from the torpedo speed of Machine Head’s double pedal drums to Kirk Hammet’s swirling lead solos with Metallica. Compared with my RM25 (US$8) USB cable bought from a local IT store, the Supra had more detail and clarity, while maintaining the punch I mentioned earlier.

Vocals, however, were not the cable’s strength, sometimes overshadowed by the heavy drums and guitar riffs. Just for comparison, I played a rendition of Kiss from A Rose by Aiza Sequera – again, the vocals were a little overwhelmed by the heavy bass. So, not the most neutral cable, I must say.

Overall, this is a cable with a great sense of rhythm – it provided a detailed and punchy ambience but still injected a relaxed air to the proceedings. This cable will also enhance bottom-end extension on set-ups that suffer from flat bass.

However, the emphasis on bass can be a bit overwhelming. If used in a bass-heavy system, it can make the music sound muffled.

Given the price, the Supra USB 2.0 cable is a no-brainer if you’re looking for a bargain upgrade for your computer-based audio system – this is a quick and painless upgrade from stock USB cable.

Those looking for an elevated experience from their fast-paced music should try out this cable. It could enhance your understanding of how your favorite musicians physically play these songs on their instrument.