SOMETHING pretty this way comes … it’s the spanking new Olympica range of loudspeakers from Sonus faber, just launched at the ongoing Munich High End show (May 9-12).

Resplendent in the traditional Sonus faber garb of wood and leather, the range is being launched in two phases – three models now and the remaining during the second half of the year.

The concept is a homage to 16th century Italian master architect Andrea Palladio, recognised as the most influential individual in the history of Western architecture, and whose final design masterpiece was the Teotro Olimpico theatre in Vincenza, northern Italy. 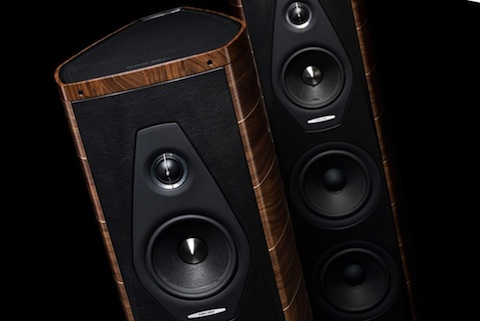 According to the press release, “the Sonus faber Olympica project is made up of a new family of passive acoustic speakers that will add to the existing catalogue of the Arcugnano factory, aesthetically characterised by the use of two iconic Sonus faber materials, walnut wood and leather.

The Olympica range has been designed ground up on a clean slate (except, we would think, for the walnut and leather). The company says the range is built around innovative cabinet structures and driver components. 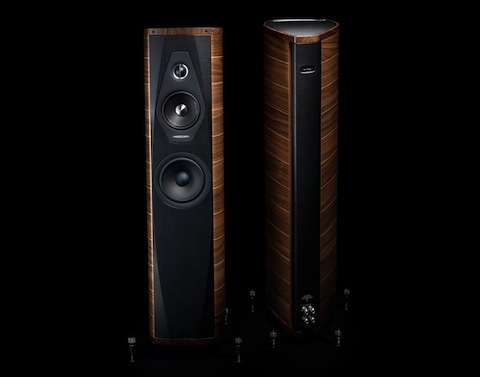 The cabinets have top and bottom plates made of solid walnut, with joints of clear maple in a walnut finish and black maple in the graphite finish. The asymmetrical cabinet structure, a first for Sonus faber, is aimed at reducing internal resonance; it also accommodates a new bass reflex system. Natural leather is used to cover the top and front baffle.

All Olympica models feature new drivers designed entirely in-house – the tweeters are silk domed, while the midrange drivers and woofers use a cellulose material for the cones.

Now, while you wait for a pair to arrive, why not feast your eyes on the video?