A decade ago, when audiophiles discussed high-end speakers, the name Focal-JM Lab wasn’t an obvious subject. This, however, changed five years ago when the magnificent behemoth that is the Grand Utopia EM was let loose on the world.

Here was a speaker that could slug it out with the best and costliest in the hi-fi domain. It broke geographical barriers for the French company, once better known only as a manufacturer of drivers and mid-priced speakers, in the British and Americans markets.

Although Focal was already a player in the high-end loudspeaker stakes before this – there was the Utopia BE line – the EM received more widespread press in hi-fi journals than its predecessor, establishing the company’s credentials in the area. Not that Focal lacked street cred to begin with – in case you didn’t already know, some esoteric “other name” loudspeaker manufacturers are Focal clients. Like Wilson Audio, for one.

The Grand Utopia EM spawned the Utopia III range that includes three other floorstanders (Stella, Maestro, Scala), a stand mound (Diablo), centre-channel (Viva) and subwoofer (Sub). Speakers in this class have longer shelf lives than their cheaper siblings, but at the KL International Show 2013 on July 5-7, Focal held its second showing of the Scala V2 Utopia (the first was at the Munich High-End 2013 event in May). 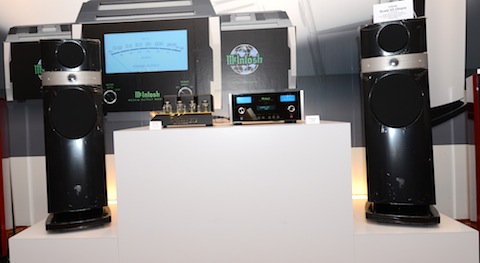 The launch was also to commemorate Ong Radio’s 76 continuous years in the business – possibly the oldest hi-fi distributorship in the world!

According to Fontaine, the Scala V2, while sharing the same physical design as its predecessor, incorporates some tweaks to enhance performance. Mainly, there’s a re-engineered bass driver that has a new voice coil, a realignment of the bass reflex tuning and re-adjusted damping for the midrange.