First impressions: More wee digital delights from the Parasound Z-gear roster. If the ZPre and ZAmp (reviewed previously here) were any indication of things to come, the ZDac definitely brings its A-game in the same small form factor package.

Right out of the box, the Zdac was an easy insertion into the main system. On the onset, there was just a hint of metallic sterility to the Zdac’s presentation which quickly dissipated, to be replaced by a robust and punchy delivery.

Specs: Connectivity options abound, including coaxial and optical, asynchronous USB and XLR (a surprise, really, for a product at this price point) outputs, aside from the ubiquitous RCA outputs. The faceplate prominently features a sleek smoked plastic strip where the selected output channels are backlit (Optical, Coax, USB) in a glare-friendly green, with the input selector dial to the right and power switch, headphone volume knob and a 3.5mm headphone out jack to the left.

On the whole, an attractive and tidy proposition but no real surprises here, as the ZDac shares similar sheet-metal and footprint with the other Parasound Z-range models.

Aesthetics aside, the Zdac packs a feature rich offering wrapped around an Analog Devices AD1895 asynchronous sample rate converter and an AD1853 DAC IC. The digital wizardry in the Zdac has been breathed upon by Thomas Holm of Holm Acoustics from Denmark. Incidentally, Parasound also enlisted Holm Acoustics in their digital gear higher up the food chain – namely the Halo CD1 CD player, which incidentally retails for US$4,500 and uses the very same AD1853 DAC chip found in the Zdac.

All incoming signals undergo jitter reduction and are up-sampled to 24-bit/422kHz, and to be sure, the Zdac will accommodate all file formats in its inherent form up to 24-bit/96-kHz. The Zdac features a high-current headphone amp that should be able to drive most commercially available headphones. Inside the half-width chassis sits a toroid power transformer that would shame some lesser integrated amps.

Performance: This DAC is definitely not reticent, with a dynamic bass offering and upbeat crystalline presentation. I found myself feeding track after track of high-resolution material to the Zdac, and totally rocked to Nirvana’s 24-bit/96kHz Nevermind and Nine Inch Nail’s new 24-bit/48kHz Audiophile Master album, Hesitation Marks, but found itself just as comfortable and unflustered with Diana Krall’s When I Look In Your Eyes (24/96).

On headphone duty, the Zdac handled itself equally well and turned out to be an excellent pairing to the Sennheiser HD650 and Grado SR325i cans. Listening to Alison Krauss and Robert Plant’s Raising Sand (24/96) was a joy with articulate detailing, deft toe-tapping timing and decent sense of space, and only falling short in absolute refinement.

The Zdac’s Class-A headphone amplifier has sufficient current to drive most dynamic headphones but then, again most headphones would play well with the Zdac given its 10ohm output impedance. I’d have preferred a beefier volume knob on the Zdac but it serves its purpose just fine. 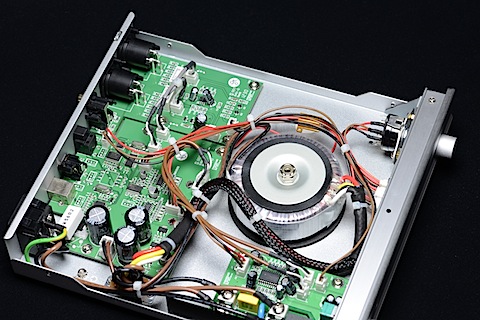 The good:  Extremely versatile DAC with heaps of connectivity and format adaptability.

The ungood:  Does require due care in component/system matching.

Final verdict: Most definitely the pick of the litter of the Parasound Z-range. The ZDac is clearly an eager and willing component with few overt shortcomings and if it were to be faulted, it would be for omission rather than commission.

The options at this price range are plentiful but the Parasound Zdac deserves a listen. With headphone amp bundled in, the Zdac dishes out versatility and price bracket busting value.

MK Chong, a rehabilitated ex-investment banker, still doesn’t get out nor see the light of day much. When he does, he has a passion for the finer things in life; family, single malt whiskies, food, cars, music and cool gear. He believes there’s more than one way to nirvana and that just because everyone says so, doesn’t make it so. Currently, he’s re-discovering the beauty of planars and tubes and believes in the inescapable future that is digital.