First impressions: I will always look on Pro-Ject gear favourably for the simple fact that the first turntable I ever purchased was its Debut II Phono. It was the cheapest turntable available on the market at that time with “hi-fi” cred, and all I could afford then. True, it had limitations, but I fondly recall the many hours of musical joy it provided me as a vinyl newbie.

The Pro-Ject CD Box DS is a different beast – the Debut II phono was decidedly entry-level but this has higher aspirations. Touted as a “high-end audio CD player””, it aims to deliver top-notch performance at an affordable cost – and by and large, it delivers. 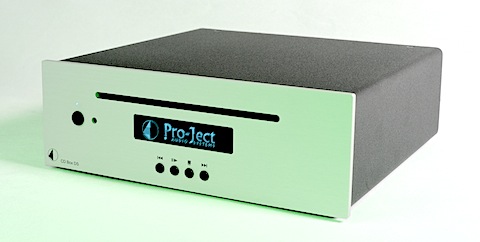 The CD Box DS is part of its Box Series of components, with a design brief to link “micro-sized hardware of the IT world and the big boxes of the audiophile world”. It isn’t going to blow you away with its minimalist aesthetic, but it is solidly built.

I admit to underestimating the capabilities this diminutive box of a player, and the first few notes fresh out of the box took me by surprise. It was a little rough around the edges, but its all-around poise, from tonal accuracy to musical presence was palpable. It only got better after proper running-in and application of footers for enhanced isolation.

Specs: The CD Box DS is built for the sole purpose of playing audio CDs based on the Red Book standard. Standard commercial CDs, CD-Rs and CD layers of SACDs work fine. Doing the number-crunching is the ubiquitous Burr Brown PCM 1796 24-bit/192kHz chip, with eight-times oversampling.

Given Pro-Ject’s turntable pedigree, some attention has been paid to the transport mechanism, which is equipped with a “four-layer suspended CD drive”. While I don’t exactly know what it means, this indicates the mechanism is isolated from the chassis, with some redundancy built-in. 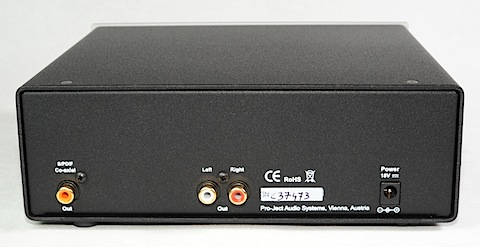 The front-panel dot-matrix display is legible enough, but there is a shortage of physical control buttons found on both the unit itself and the remote control – which is my biggest grouse. For example, there’s no eject button (you have to press the “Stop” button twice), and a “+10” button means you can’t just hit “1” twice to play track 11.

The only connections round the back are a single pair of RCA analogue outputs, a S/PDIF digital output and the power jack input from the external wall-wart PSU.

Performance: I’m not a fan of front slot-loading CD players, but the important thing here is that it works flawlessly, and did so throughout the review period. A slight nudge kicks the loading mechanism into action and the disc slides in silently and smoothly.

Operating it takes a little getting used to with its minimalist controls, but that said, the “hidden” functions (save for ejecting discs) are not those one will use constantly. Which bring us to the remote control itself. I’m sorry, but a credit card-sized unit that somehow manages to elude me at the start of every listening session is a real dampener – give me a proper, full-sized remote any time!

Listening to the CD Box DS was never boring. There’s plenty of detail and insight on offer and it drives the music along with some verve. Yet, it never sounds too in-your-face, with a clear midrange and sweet treble. Bass is well-defined and taut, although I would have preferred a little more slam to it.

It also displays a very competent soundstage with good precision and depth perception.

The player will engage with every disc fed, and it’s easy to feel the visceral character of rock music and the emotion of a solo pianist or vocalist.

It has a generally neutral character, but does not descend into sterility. While it does not quite impart an organic, analogue-like warmth, it is sufficiently bereft of digital glare – which is a score in my book.

On more than one occasion, with the intention to A-B a track with the resident DAC, I listened to the disc all the way through. In direct comparison, I did detect some graininess to the sound – but bear in mind the difference in price.

Some care with proper footers is also beneficial. Some compliant Sorbothane-like material beneath the player did wonders to its sound. Everything seemed to snap into focus. Images solidified, the air around instruments increased and there was more coherence to the music. 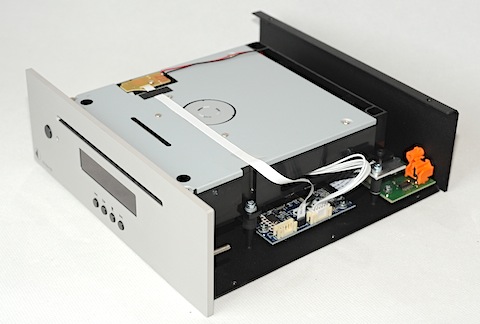 The good: A CD player couldn’t get any more straightforward than this. Everything about the CD Box DS is targeted to get the most of out physical CD playback – and it shows. Plus, its transport is good enough to feed a much-pricier DAC. An all-rounder with even tonal balance, it will do justice to your entire CD collection, regardless of genre.

The ungood: The remote control is more suited for a budget rather than a high-end component, and the absence of physical buttons for certain functions is inconvenient. It performs superbly as a dedicated CD player, but at a time where physical media is losing ground to digital storage, this kind of specialisation could deter the IT-savvy audiophile.

Final verdict: An engaging, detailed sound which ticks all the right boxes – and affordably priced – makes the CD Box DS a must-try option at its price point. It’s claims of being a high-end component may be over-reaching a bit, but it does have many sonic qualities to appreciate. This is one that can be the mainstay of a mid-end system for years, and if the urge comes to upgrade, the quality of its transport is sufficient to justify concentrating the wealth on a higher-end DAC.