First impressions: There is nothing remarkable about Rogue Audio’s Sphinx integrated amplifier at first glance. It is black and sports a number of silver knobs in front, a blueprint that many have used over the years. Then, you notice the small grille on top – peering through it reveals two small tubes. A tube amp? Not exactly… this is a hybrid, marrying valves to a Class D design, you learn later.

The Pennsylvania, US-based company has acquired a reputation for making high-end amplification at modest prices, and the Sphinx is among its newer and even more “affordable” offerings, launched earlier this year.

At first listen, it was hard to say what was exemplary about the amp, but it didn’t offend the senses and there was a simplicity of presentation that sounded promising to my ears. Many audiophiles have a negative perception of Class D amps, so would the Sphinx change this?

Specs: The 100-watt-per-channel (into eight-ohm loads) design uses two matched 12AU7 tubes in its mu-follower preamplifier stage. driving a couple of Class D, or switching modules in its power amp section. Straight Class D amps have a reputation for running cool and tending towards a leaner sound, but the Sphinx, as we will see, deviates from the norm with the addition of tubes in the path.

Three single-ended inputs are provided, apart from the RIAA-equalised phono input, which is compatible with MM and high-output MC cartridges (2mV and above). For the phono stage, 40dB of gain is provided, with 47kOhm loading and 150pF capacitance. There’s also an output in front for headphones that is routed via a discrete amplifier section.

A set each of fixed and buffered variable outputs allows the user to add a subwoofer or other outboard devices, possibly a power amp – useful if you want to expand your system later. 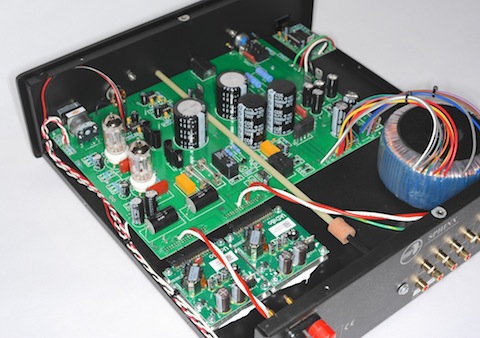 A detachable power cord is provided. Rogue says the Sphinx is fully designed and hand-built in the US of A, and comes with a three-year limited warranty (six months on the tubes).

Performance: The trick with this hybrid amp that Rogue has executed is incorporating tubes in the signal path. Class D design has yet to achieve its  full potential, and you hear terms like “lean” and “cool” being used to describe these amps. Not to mention, additionally, some lack of grunt in the bass department.

The Sphinx, however, breaks this mould, although not to the extent that you’re going to mistake it for an all-tube amp. There’s but the merest trace of warmth – instead, the overall balance comes across as neutral, without being clinical in texture like some solid-state amps.

Those 12AU7s help no end, I’m certain – they’re generally subtler and less steroid-laden than most preamp tubes, so their effect in the signal chain is complementary rather than intrusive. Details are vividly presented, with little additive qualities in the mid and high frequencies, and the amp never sounded cool or bland any time.

Bass was surprisingly taut and in possession of an impressive level of heft… driving the resident Maggies was never a hard task for the Sphinx at my usual listening levels, which range from soft (for sonic wallpaper) to edge-of-the-seat loud when I’ve got my favourite rock CDs on and feel like some air guitar.

The amp dealt with complex recordings with as much equanimity as it did simpler acoustic recordings – I’m going to say it works with a variety of material if your speakers are up to the task.

Unfortunately, I was unable to test the phono stage as the cartridge I use is of a low output variety, but if the Triton phono preamp I reviewed a while ago is any indication of Rogue’s capabilities in this area, I have little doubt it delivers in spades.

The extra preamp outputs are quite a fantastic addition for those wanting to supplement, for example, the bass, if using small speakers. My Polk Audio compacts are already impressive in their level of low-end heft, but when I routed the Sphinx’s variable output to an SVS subwoofer, the results were highly impressive.

The good: This amp has the right idea about presentation – it was immersive and didn’t deviate from the business of pleasing the listener while sticking close to the truth.

The level of features is another reason why the Sphinx has the edge on the competition – if caters to all sorts of situations, whether driving difficult speakers or small ones with a subwoofer in tow.

The ungood: Honestly, it’s hard to find any downsides about the Sphinx. Sure, you can try hard and ask for a DAC on board or more power or a flashier finish… okay, I’ll nitpick – it’s the remote. They should have included an input selector and a mute button.

Final verdict: The word “involving” tends to give the impression that something else, like accuracy, is being compromised, but this amp is both simultaneously – Rogue has struck the right balance with this one, despite taking a less obvious route.

I will stick my head out and say it is one of the most impressive integrated amplifiers I’ve had the pleasure to run in my system over the last few years, matching the performance of much more expensive units, and even some pre-power combis.

No, I won’t sell off my resident amps just yet, because they’re capable of delivering more in the areas of detail, pace and heft, but they’re also thrice the price. If, however, I were putting together a simple system centered around an integrated amp, the Rogue Audio Sphinx would be in the top three on my list.