TWO new Krell pre-amplifiers ship next week, and they’re nothing like the Krell products of yore – but then, nothing is! The Illusion and Illusion II are physically designed to look like the rest of the Krell line that has emerged over the past couple of years (the Class A iBias design power amps being the most recent), although we suspect they probably look better up close than in photos.

The flagship Illusion is a two-box preamp that keeps the audio circuitry and power supply well separated. The dual monaural circuit has individual boards and power supply regulation for each channel, and according to the Krell literature, “all signal gain is realised in surface mount topology using proprietary multiple-output current mirrors with nearly 500 times the open loop linearity of other designs.”

It has “1.5 MHz open loop bandwidth in a zero feedback, balanced, Krell Current Mode design terminating in Krell CAST.” An all-Krell system can be set up the preamp that reduces the number of voltage gain stages to the minimum of one, with the resulting noise floor approaching “the theoretical limit of technology.” No negative feedback is applied in the circuit, and the volume control is a balanced resistor ladder design. 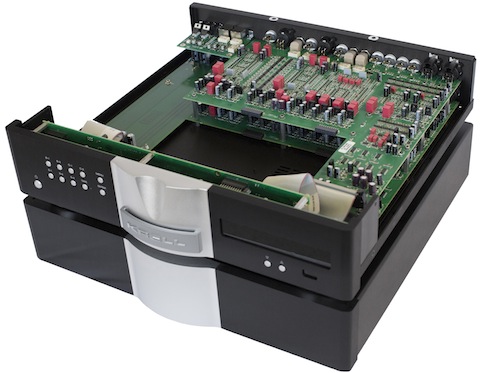 There’s also an optional crossover that allows use with a subwoofer/satellite speaker system – no need to pass the signal to the sub’s often lower quality circuitry before it reaches the main speakers. Krell based this crossover design on the one used on its Modulari Duo Reference loudspeaker. Frequency points of 40Hz, 55Hz, 75Hz and 100Hz can be chosen, with 12dB, 24dB and 48dB Butterworth or 24dB Linkwitz-Riley style filters.

According to Krell, the preamp’s audio circuitry is fed power from a Krell Current Mode analogue power supply that features an oversized 290VA transformer and 41,600µF of capacitance. Krell claims this is capable of delivering current and voltage swings for any musical event but “gentle on AC requirements when not in use” – Krell’s new eco-friendly design reduces standby power draw to a mere 2W.

The Illusion II is a less ambitious beast but almost as impressive. This “smaller brother” caters for digital needs – it has five digital inputs, including AES/EBU, coaxial (two), optical (two). The digital section supports up to 24-bit/192kHz resolution via its ESS Sabre DAC. We wonder why no USB?

Again, this is a dual monaural design in the mould of its costlier sibling, with similar circuitry, including the current mode approach. There’s a headphone output with circuitry identical to the main circuitry.

The onboard power supply has a 95VA transformer and 40,000 µF of capacitance. The same principles of noise rejection and eco-design apply here.

The Illusion II also has two pairs of XLR and three pairs of RCA analogue inputs, and for outputs, one pair each of balanced and single-ended.

Check with your dealer for pricing… then again, if you have to ask…