“WELL, that’s certainly different,” I thought to myself when trying to extract one GoldenEar Technology Aon 3 speaker from the carton (and each comes in a separate carton). I usually put pressure with both hands to the sides of the cabinets when doing so, but because the cloth covered sides gave in so easily, I knew instinctively that these were not solid side cabinet walls we were dealing with here. I found out on checking pictures on the Internet that there were passive radiators side-mounted on each flank of the loudspeaker cabinet.

This is not the first sawn-off obelisk-like bookshelf loudspeaker I’ve encountered, but it certainly is one of the more unusually constructed. The cabinet, for the most part, is covered with a cloth grille, a la the earlier Mirage loudspeakers, and the bits that are not covered look a beautiful gloss black, even if plasticky (because it is plastic!).

One will have to pop the top and bottom “end-caps” off the loudspeaker to be able to remove the cloth grille (more like stockings, actually – there is a tensioning string (no garter belts) to loosen and slacken the cloth to allow removal). I took off the top cap only to allow the grille to be pulled down to expose the drivers, which I will describe in the next section. But first, a little about the makers. 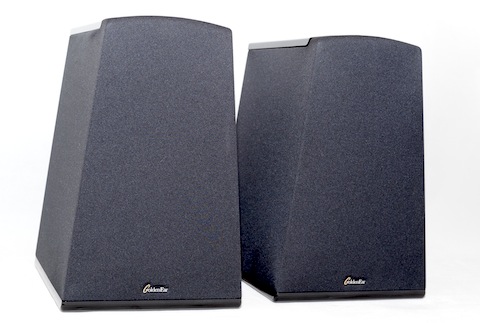 GoldenEar as a company isn’t very old, set up in 2010, but the principals behind it have been around for yonks, one of them first co-starting up Polk Audio in the 1970s, and then Definitive Technology in the early 1990s. Said person, designer Sandy Gross, has been at the game for 40 years now.

While it is an American company with its offices in Maryland, the actual bandsaw-to-the-MDF work is done here in Asia – a business model which has, where successful, allowed American-designed goods to be brought to market at a lower (or at least more competitive, if the company was inclined to pass the savings on down the line) cost, yet with expected standards of reliability.

BITS AND PARTS: The Aon 3 is mostly constructed from MDF. The unusual shape is apparently based on engineering considerations and not just purely aesthetic ones – the bottom-to-top tapering dimensions result in non-parallel walls which help to reduce standing-wave reflections. Not that I am particularly fond of this brand of aesthetic in any case; give me lute-shaped Sonus Faber-ish wooden cabinetry any day over these. Your golden eyes may find beauty where my leaden ones fail to. 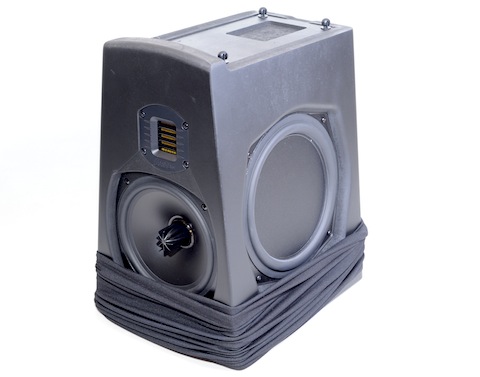 Ribbon tweeters are reputed to offer excellent, smooth high-frequency extension, achieving a level of detail and speed which most metal dome units can only aspire to. A lot of work would need to have been put into the rest of the design if the potential superiority of the tweeter (it can apparently go up to 35kHz) is not to be let down by the rest of the bits that make up the Aon 3.

Connection is single-wired only, so fans of bi-wiring or bi-amping will have to look elsewhere if for some reason this is a personal overriding requirement for ownership of any given pair of loudspeakers.

The manufacturer specifies the Aon 3’s sensitivity at 90dB (presumably based on 2.83V input, measured at 1m), with its impedance being compatible with eight ohms. Suggested amplifier power begins at 10 watts per channel with the upper limit being 250 watts, so this here loudspeaker doesn’t mind a harder spanking if the user is minded to go on a power trip and drive it to within an inch of its life.

During the initial running in period, I had set up the Aon 3s on standard sand-filled four pillar 61cm/24-inch stands, pushed back to about 35cm off the wall. The initial impression I got was here was a loudspeaker which sound significantly bigger than its enclosure suggested. 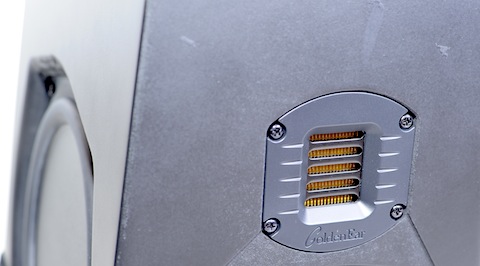 Further experimentation led me to go on to place them on the top of the pedestals normally occupied by my staple Sonus faber Guarneris, sited some 55cm or so from the back wall. The Aon 3s did not seem to like solid core cables, so I used some ancient but still reliable Cable Talk Talk 3 copper stranded cables. In terms of power, these babies really did relish having more on tap, so I (judiciously) let them have fractions of the 120 or so watts the combined 1/3rd triode-2/3rd pentode setting on the Mesa Baron amp could let out. The zero and minimal feedback settings were used on the Baron for the most part.

IN CONCERT: There are small speakers which seem to be able to effortlessly put out a substantial and full blown room-filling sound without sounding stretched or strained (within realistic limits, of course), and these Aon 3s certainly fall into that category. Strong suits include a big acoustic with a naturally spacious soundstage, and a treble which was extended and finely detailed.

The midrange was also judged to be good, with human voice and natural timbre of acoustic instruments well rendered. However, if one were more used to the BBC-style monitors like the old Spendor S20 or Harbeth HL5, or perhaps even the classic Italian Sonus faber offerings, I would be inclined to accept the argument that the Aon 3s do not quite match these references in terms of perceived naturalness.

Bass output was strong, and careful placement here would reap rewards for the listener. While it sounded tight and rhythmically clean, it was perhaps not as tight and dynamic as I had expected it to be. It did play bass tunes cleanly but the quality of the performance here is programme-dependent. 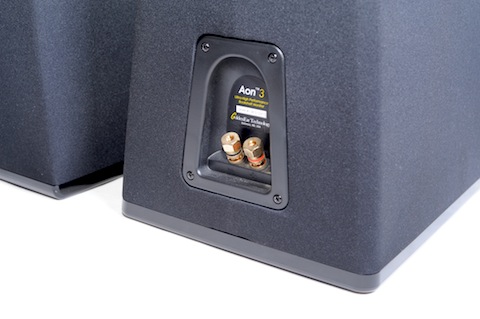 The lower regions were impressive with slower bass runs like Chuck E’s In Love on Rickie Lee Jones’ debut album, but when playing Danny’s All Star Joint from the same record and Dirty Blvd from Lou Reed’s New York album, I felt that my ancient Triangle Ikoto loudspeakers were better able to convey the rhythmic aspects that bit better.

Still, it was a very good performance, but those of you who grew up on Epos ES11s and Rega Kytes may want to examine this aspect of the Aon 3’s performance with more scrutiny if considering for purchase, as its other strengths are so substantial that these little make-or-break differences which manifest themselves only with longer exposure may get overlooked until later (and you know what happens in that situation, so try to make sure you’re happy with all aspects right upfront).

While each Aon 3’s pair of side-mounted passive radiators certainly helped extend bass and provide a degree of extra punch, for some reason I found that the Aon 3s seemed to adore (well-recorded) piano music. The attack, sustain and decay aspects were surprisingly realistic and there was a substantial degree of the illusion of a three-dimensional presence of a grand piano in the room. This aspect reminded me of a loudspeaker I had yearned to own many years ago, but for lack of funds, the Australian-made Moratori Julia Reference, which by coincidence, also utilises a passive radiator to get better bass performance from its tiny box.

What the Aon 3 seems to do better than most loudspeakers, and not necessarily just at its price, is keeping individual strands of sounds within congested and busy recordings distinct and relatively easy to focus on (if one chooses to) without being overwhelmed by the rest of the mix. Modern pop and commercial recordings benefit from this more than close-miked individual instruments do, but this is one helluva loudspeaker to better hear, for example, all the little aspects that went into the production of tracks like ABBA’s When I Kissed The Teacher and Take A Chance On Me. 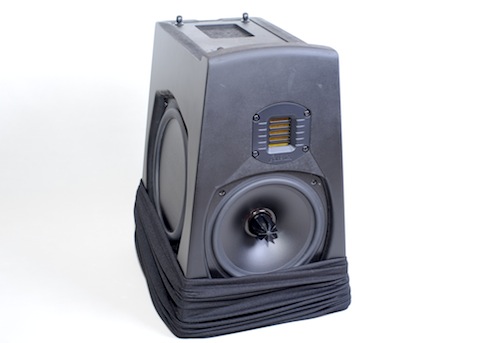 APPLAUSE:  Loudspeakers are the most subjective of all components in the like-dislike equation. None are perfect, but few get so much right in the quantities at the price these Aon 3s notionally go for. They certainly warrant attention, and to my mind should, nay, must, be in the shortlist of anyone shopping for a small loudspeaker in this price range.

BUT…: For all its dazzling detail and cabinet-size defying sound, especially in the lower frequencies, it seemed to engage my head and impress me more from the intellectual than emotional aspects. No, I am not saying it didn’t engage me emotionally, just that there seemed so much going on that I felt I was being forced to pay attention more than just sitting back and relaxing to the music. Admittedly, this may be more a plus than a minus, depending on how one views it. Those looking for “a better, more modern sounding LS3/5A” might perhaps be disappointed, though, because the Aon 3 does not, and does not pretend to, tread that path.

FINALE:  A meatier, richer sound with, to my mind, more accurate tonal quality and better all-round integration and listening comfort can be had in this price range from certain competitors, but I can’t think of any that can match the speed and detail the GoldenEar Aon 3, with its unique ribbon high-frequency driver, easily achieves. I do feel that this is one you must hear, though, and I can imagine quite a few of you who’ll fall head over heels in love with it, especially those seeking a big spacious sound from a pair of relatively small cabinets. Put them on some taller than average stands and place them well, and they’ll certainly reward with a dazzling performance. 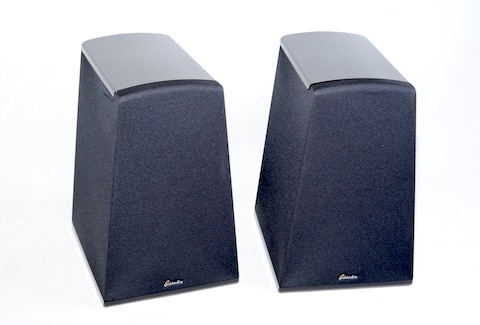