MOBILE devices cannot be ignored as a source for the music system in the home anymore anymore. With the ubiquitous ownership of smartphones and tablet devices, everyone can potentially store their entire music library in their pocket – and there are many who do!

When it comes to playback, however, most rely on headphones/earbuds, or transmit them wirelessly to small-form portable speakers. The problem is none of these can provide the sonic experience of a full-sized music system… which brings us to the JBL Authentics L16 speaker system.

What the L16 provides is wireless connectivity via WiFi and Bluetooth with any smart device – not just Apple-specific. The resurgence of vinyl as a popular media format is not lost on JBL, and the L16 provides an MM/MC phono stage, too! 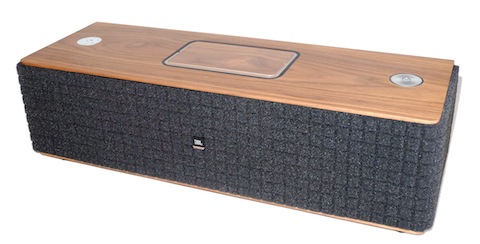 BITS AND PARTS: The L16 may look like a soundbar, but that’s not what it is. It can function as one, but think of it more as a sound system with amplification and stereo speakers housed within a single enclosure, optimised for music playback.

The L16’s design takes cues from the legendary JBL Century L100 loudspeaker and features a similar waffle-like pattern on its foam grille.

It’s quite a beast of a component, measuring 294 x 818 x 369mm (h/w/d) and weighing a hefty 16.3kg, so it won’t sit below a TV screen without obscuring some part of it. It’s hardly an eyesore, though, and is aesthetically pleasing with its walnut-finished veneer.

What this bulk comprises is a stereo three-way speaker system with one-inch tweeters, two-inch squawkers and 5.25-inch woofers, each driver powered by its own 50W amplifier module (six in total!)

As mentioned, the L16 has modern connectivity built-in, but hasn’t eschewed the traditional. There’s also optical digital and a single RCA analogue jack, too. The RCA pair not only accepts line-level inputs, but has a MC/MM phono stage along its chain, so you can connect a turntable to it as well.

Sans wires, you can use the smart devices’ Bluetooth function or via WiFi – AirPlay through iOS devices and DLNA for everything else.

There’s also a removable cover on the top panel, which hides two USB ports (solely for charging devices only, not for connecting sources) as well as another analogue connection for a 3.5mm minijack plug. 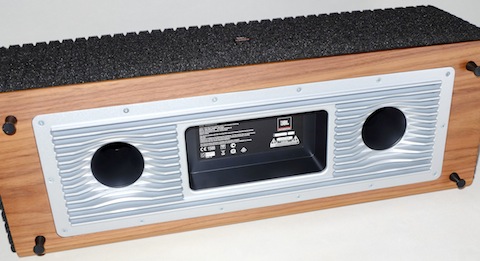 IN CONCERT: Let’s get this out the way – the L16 is not for the typical audiophile. If you’re seeking a balanced, detailed or nuanced sound with precise imaging or soundstage – the usual traits those in the hobby want, this is not for you. However, what the L16 does is grab the listener’s attention by sounding big, brash and bold.

It’s most obvious in the bass, which is a typical JBL trait – case in point when playing a track from Katy Perry’s Dark Horse from her Prism album. As is the case with most current-day music, there’s little in the form of dynamics, but it has this bold, booming bass line. The L16 thumps it out with vigour and massive presence. Pump up the volume and you will not only hear it, but feel it hitting you in the chest as well! It doesn’t really reach the lower frequency registers, but the volume levels it managed to achieve while still sounding clean were truly impressive.

The L16 is a true party animal – feed it any raucous, fast-paced tunes with thumping bass lines and it’ll rock along with the best of them. I gave it healthy servings of Daft Punk, Pharrell Williams and even the new Led Zeppelin remastered albums, at every instance, there was this craving to pump the volume up further and to boogie along with the beat!

Things don’t quite fare so well when you scale the tempo down and try to hear more into the music. The L16 does etch out a fair amount of detail, with good treble extension, but finesse is not a word that comes to mind here. There’s some semblance of soundstaging and imaging, but these seemed rather haphazard. Spatial effects do extend out of the confines of the box, but you couldn’t really predict or pinpoint where they came from.

Sonics aside, setting up the L16 for first use can be quite a challenging process. For starters, there’s no remote control unit to speak of – all remote operations can only be done on a smart device with its JBL Music app, available free from both Google Play and the Apple App Store.

There are a few ways to initiate first communication between devices, but the easiest way is to connect the device via the USB port and “share” settings from the device with the L16 (the app will prompt you through the process). This will allow the WiFi settings on the device to be duplicated on the L16, so you won’t have to mess around with any passwords. A Bluetooth connection is achieved with a simple pairing.

However, I did notice a distinct latency when streaming music from the smart device to the L16 via WiFi. Bluetooth is almost immediate, but with Wi-Fi, there was almost a one-second gap between the action and the accompanying sound – it doesn’t really matter when playing pure audio material, but impossible with games or movies. Between the two, there’s also a significant step-up in quality via Wi-Fi – everything just sounds more fully fleshed out compared with Bluetooth.

If you wish to go the wired route, however, note that the RCA and optical digital connections (as well as power socket, on/off switch and MM/MC/line-level switch for its phono stage) are at the bottom of the device – so connect all the cables you want to before putting it in place.

Oh, and its phono stage can be described as “functional”. The L16 doesn’t exactly reveal the finer nuances of the format, but an on-board phono stage offers the opportunity to those unacquainted with vinyl to experience what this “new” fad is all about – which is a good thing. 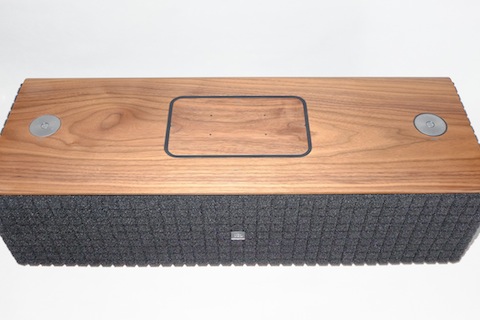 APPLAUSE: The L16 is fantastic if you want to fill your room living room with sound; it is capable of injecting great excitement into the music with big, thumping bass and prodigious volume levels. It is ideal for the person seeking a quality speaker system to play back the music on his smart device, and is not concerned with the nitty-gritty that obsessive audiophiles are. Add in vinyl playback compatibility for the extra element of cool and the yuppie in you needn’t look much further than this.

BUT…: The presence and excitement that the L16 has in abundance comes at the price of a trade-off in finesse. I would also have liked an actual remote control instead of solely relying on a smart device. While the L16’s wireless connectivity is fantastic, more than one RCA input would be preferable, one which doesn’t share duties with the phono input. Also, that latency when connected via WiFi is a major drawback.

FINALE: The L16 will easily catch the eye and the ear of the casual listener with its classy design and bold sound. With its myriad of wireless connection options and phono stage, it will be a great addition to any living room – even if it isn’t hi-fi in the purest sense of the word.