THIS is one of the subjects of endless debate in the audiophile community – do power cords matter? I think they do to an extent, but I don’t advocate spending insane money on them! The Mad Scientist Audio Neo power cord, however, seems reasonably priced in the audiophile context. You won’t need to mortgage the house.

The Neo has been making waves in the audiophile community in recent months. Certainly, it is unique in appearance but looks don’t sell a product. Clearly, people were hearing something and I was curious to discover what it was.

When the Auckland, New Zealand-based company offered a couple of months ago to send us a Neo to hear for ourselves, I didn’t hesitate.

According to the literature, the Neo has a “two-stage filter using three BlackSticks and three NEO-Kegs – the special material soaks up radio frequency noise and stray magnetic fields.”

Note these two features placed at the source end of the cord. Two of the Kegs have neodymium magnets embedded in them – Mad Scientist says any more does not have sonic benefits.

There are no capacitors and inductors in the purifiers – material from the company’s Black Discus audio system enhancer is used which purportedly has “specific non-linear behaviour”.

The power cord is available in white, red, navy blue and black… other colors as per request.

IN CONCERT: After leaving the Neo running with various bits of equipment, I was ready for some serious listening sessions. Since I run Odyssey Audio Khartago Extreme SE monoblock amps in the main system, it was only possible to use the Neo with the preamp (Odyssey Tempest) and CD player (Ayon CD-1s).

My initial impression was that everything seemed to sound just a bit louder, with elements of the mix standing out with better clarity and separation. The apparent increase in loudness was noticeable immediately, the others improvements were subtler. I figured since the primary system was being run off a balanced isolation transformer, the benefits were less significant than they would have been in a system with no power treatment.

I then used the Neo with the secondary system – Rega Elex-R amp, Marantz CD6005 CD player and Monitor Audio BX2 standmount speakers – which is powered from the wall outlet via a power strip. 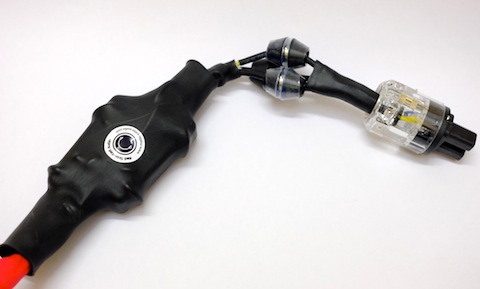 The Neo replaced the factory-supplied power cord that came with the Elex-R and now, the improvements were more than subtle. Again, immediately, the music seem to go louder, but there was also a noticeable tidying up across the spectrum. A comparison showed muddier mids without the Neo in place; when I switched to it, it was as if the gunk had been swept away from a good part of the sonic.

The quieter backdrop allowed me to hear more detail in the tracks, with spatial cues more obvious. The tidying up was also obvious in the bass, which sounded tauter and cleaner, with better focus. Some power cords then to sound smooth and rich, but draw the presentation back rhythmically. I found the Neo leaning to the neutral and doing nothing to restrict the music’s natural flow.

The Neo also seemed to facilitate better projection of the vocals and instruments, lending more air in the stage, and allowing instruments to be better fleshed out in the mix. The overall impression was that of a tidier, more on-the-edge and detailed presentation.

APPLAUSE: Obviously, the Mad Scientist people put a lot of thought into the Neo. Rather than espouse the virtues of the conductors itself, the company has focused on peripheral elements that work towards getting rid of the AC gremlins between the wall outlet and the power receptacle. The Neo succeeds in its brief, and for what it does, seems reasonably priced.

BUT…: The package is rather unusual and takes a bit of getting used to – there’s no glam factor here, just what works. Wish the standard length had been 1.5m, instead of 1.2m. Some readers will note that no specs are provided on the Mad Scientist site, which also gives the impression of a super-tweaker at work.

FINALE: If you’re the sort that likes to mess about and experiment with power cords, the Mad Scientist Neo is a must-try. While it may not be the solution to all your AC woes, it will surely add a bit more zest and clarity in most mid-budget system and even some higher end ones. Compared with some of the exotic power cords I’ve tried over the years, the Neo comes off as a bargain.

Mad Scientist does offer a 30-day return policy, so you can get a refund if you think the Neo doesn’t cut it for you. I would certainly be curious to find out what difference more than one Neo would make in a system.

Price: US$399 for 1.2m, terminated
Available from Mad Scientist Audio