TANGENTIAL or linear-tracking tonearms, for many vinyl aficionados, are the ideal way to mount a cartridge. They usually don’t come cheap but German turntable specialist Clearaudio has just paved a more affordable path to obtaining one of these coveted items… in the form of the all-new TT5.

For those unfamiliar with the term, tangential tonearms differ from regular ones in that they allow the cartridge to remain perfectly parallel to the groove of the record at all times – which coincidentally mimics how records are cut in the first place.

As Clearaudio explains in a press release, “during the cutting process, the cutter diamond maintains a consistent angle of 90 degrees from the beginning of the groove to its end.

“Therefore, the optimum way to extract the purest information from that groove without distortion is with an arm that reads the groove in precisely the same way as it was cut.”

Which is exactly what the TT5 does. 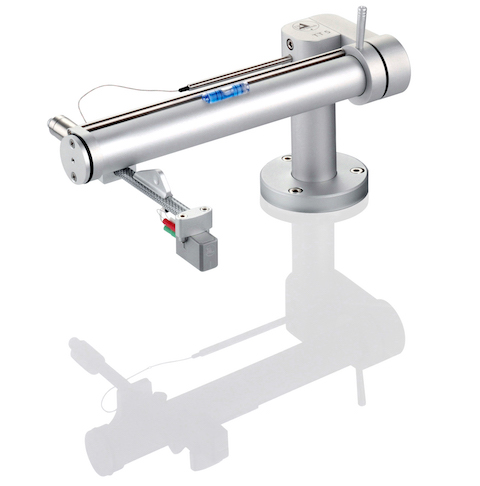 “Since the record groove, stylus, cantilever and tonearm are perfectly aligned, no side forces are generated and so no anti-skating compensation is needed,” it further states.

To make the product more affordable, the TT5 adopts a fully-rigid design. However, an optional TT5 swing base is available, which allows the entire arm assembly to be moved out of the way when swapping out records.

It also allows for full adjustment of tracking force and azimuth, which further permits the user to fine tune the cartridge’s position so that it always sits perfectly in the groove.

Interested yet? The TT5 is available at a mere £1,750, while the optional swing base will set you back an additional £250.