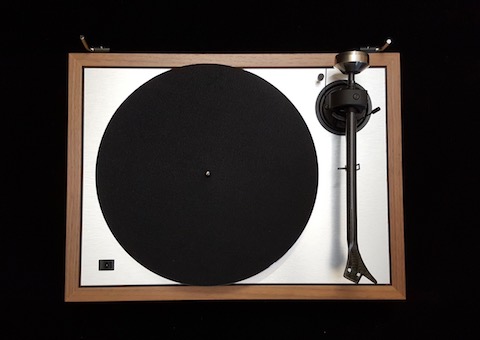 PRO-JECT THE CLASSIC turntable, with tonearm and cartridge

+ Hits the goals set in its design brief with a bullseye. Sound quality is compelling, a fine arm and cartridge completing a well-bundled package; many will enjoy just playing record after record through it.
– The mat! The mat!

WITH the seemingly endless number of manufacturers, and models, coming into the “high end” turntable market, it’s become near-impossible to keep track of them. You’d drive yourself nuts if you tried. But the pertinent questions are: who’s in it for the long term? Who’s merely just jumping on the bandwagon, and not likely to be around to service their product and/or provide spares in the longer term when this “vinyl revival” runs out of steam (again), as all such things inevitably do?

Well, one manufacturer who is not likely to exit the turntable business too quickly is Austria’s Pro-Ject Audio Systems. Back in the previous century, they got into it when almost everyone either was, or was looking toward, getting out. In fact, company principal Heinz Lichtenegger virtually saved the Czech factory, where Pro-Ject’s turntables are still made, from closing back then. And the rest, as they say, is history. He subsequently bought the factory, or part of it and Pro-Ject celebrated its 25th anniversary last year. 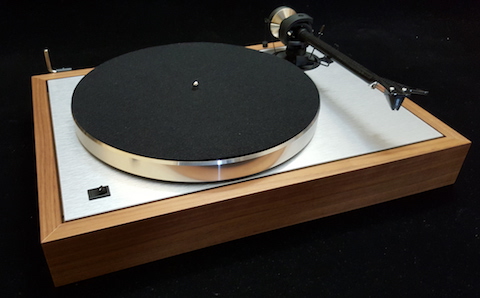 If you look at Pro-Ject’s turntables, some of them look distinctively modern. Glossy bold-coloured and clear acrylic finishes, as well as teardrop, circular and other “irregular” shapes abound. For the 25th anniversary model, Herr Lichtenegger decided to pay homage to what many consider the “classic look” of turntables with his latest, er, Classic – deep, but not too deep, compact rectangular plinth with tonearm situated to the right of a metallic platter and a flat top plate with a wooden frame and clear polymer dustcover. The Classic’s dimensions are 460 x 131 x 351mm (w/h/d), and weight, 10.2kg.

Which vintage model exactly was its leading inspiration is debatable – shades of the Thorens 160 series, AR XA, Ariston RD11 and Linn LP12 as well as some of the lower end Luxman models come to mind, perception being altered by the plinth skirt (and mat) colour. With other models in Pro-Ject’s upper range looking like those from Micro-Seiki’s heyday, and now with this model, Herr Lichtenegger can be likened to the turntable world’s equivalent of Quentin Tarantino. 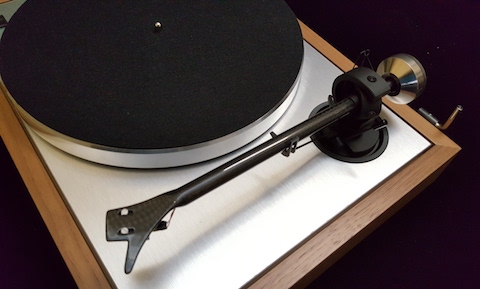 SETTING UP
The brief for the Classic was to produce a classic-looking turntable but with near plug-and-play ease of use, with anything requiring fretting over by the user (such as a bouncy spring suspension) being banished. Well, almost – speed change for this baby is still manual, where lifting the outer platter and re-aligning the belt on the motor’s pulley, is still required.

This is the balls-iest turntable I have had the experience of using. Literally. Looking at a blown-up visual of this model, one can see that the top plinth where the main bearing and tonearm are mounted is isolated from the lower level, where the motor sits, by six TPE balls, the motor pulley peeking through to the top plinth via a circular cut out in the latter, reminiscent of the Roksan Xerxes.

TPE (short for Thermo Plastic Elastomer) “is a family of modern damping materials which can be tuned to damp resonances at specific frequencies. So any TPE (used) is different and specially designed for the material and frequency range it should damp.”  Also TPE-damped is the 2.1kg precision-balanced aluminium platter. The isolation works well, much better than that of its notable rivals. 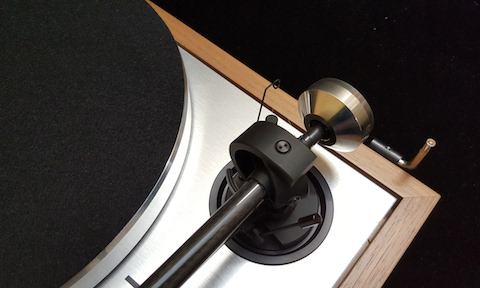 I didn’t have the (dis)pleasure of having to set up the review unit myself, as the Editor had already done that when I received it. The player came with cartridge already mounted, an Ortofon Silver model which is derived from its 2M series. Product literature informs that it is based on the standard 2M Red model, but with silver coil windings. That should mean this model is improved sonically over the basic model, unless you hold the view that silver wires don’t matter and the metal is best used for shooting into werewolves. It’s a moving magnet model with an elliptical stylus with output voltage of 5.5mv, tracking force recommended at 1.8mN.

Of the tonearms on the many Pro-Ject turntables I have (man)handled, this carbon fibre one on the Classic has been the most impressive. It seems to feel way silkier and more precise than those before it. I liked the way the finger-lift portion of the headshell is oriented toward the user, rather than the opposite on their other models. A nice touch is the armtube-locking mechanism in the tonearm cradle, which, at rest, is held in place by a little magnet with just the right strength, being easy to disengage when cuing up an LP. And for those intending to swap out the bundled cartridge for something grander, yes, both arm height and azimuth are adjustable. 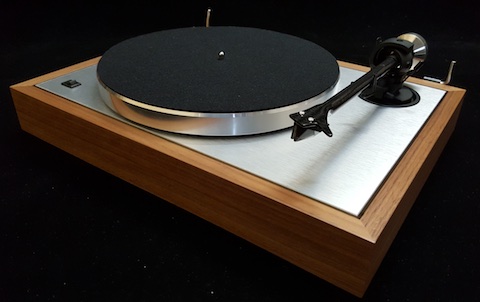 Moving the turntable unit about proved a little inconvenient as the bottom three compliant feet sit with little clearance between the bottom of the plinth skirting and the surface the turntable sits on to insert one’s fingers to lift the unit. A minor irritant for a reviewer, and probably a non-issue for a site-and-forget user.

LISTENING
After checking the usual parameters to determine the review sample had no anomalies (cartridge tracking issues, speed correctness, etc to within what the usual tools a non-hardcore lab rat would usually have on hand could indicate, and playing some familiar selections normally used as test tracks), listening in earnest and comparative listening with the resident units could begin.

The Classic turned out to be a turntable package well able to entertain this listener. Initial impressions were a fairly large-scaled, well-focussed and airy presentation. Weight, tonality and dynamics were notably good – it did not sound as bold or assertive like rivals in the Rega line or the resident Roksan Xerxes-RB1000-Benz ACE, but it was still strongly confident and a compelling listen, once it hit its stride. Mids were fine with fairly good separation, highs were clear but, not-unexpectedly, falling behind the Roksan reference combi in detail and upper extension. The cartridge performed well, but was justifiably suspected of being the limiting factor for the away team.

The Classic played rhythms confidently, keeping things tight and was in no way embarrassed by the Roksan combination (where the RB1000 arm alone would have cost more than the entire Classic package). But somehow suspicion of blurring and unevenness tugged at me. The bottom end, while firm, just did not come out as freely as the mids did, which the comparison players the same tracks were tried on made evident – bowing of the cello in Christine Collister’s version of I’ve Got You Under My Skin had a slightly constrained quality to it, and the drum lines of Robert Palmer’s Flesh Wound were less bruising, as well as lost some depth. 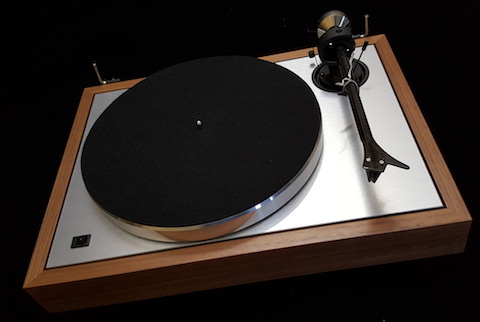 An even overall balance was a memorable strength of some of Pro-Ject’s cheaper offerings, so the “I’ve been here before” feeling arose. Having heard the same issues with the very good Debut Carbon model previously, I ditched the stock mat for one from the Linn LP12, and subsequently for the Blue Horizon cork mat.

Now, it is possible to somewhat tune the sound of any turntable to be more in line with one’s preferences, but good as what I heard with the stock package, substituting the supplied felt-like mat with the Blue Horizon cork mat, to me, liberated the sound of the Classic. Background noise seemed to drop and the cartridge gave the impression of tracking more securely, the bass firming up and flowing more evenly with the lower mids. Surface noise from less than pristine LPs also became less noticeable. And Steve Earl’s Copperhead Road sounded like the man was singing with full defiance again.

THE LAST WORD
No, it’s not a case of the Classic package being deficient, far from it, it being one of the more enjoyable turntable combinations to have come my way. Potential buyers must, of course, make up their own mind if the Classic’s overall presentation is preferable to obvious rivals like the Rega RP6 and Clearaudio Concept.

I actually find myself quite persuaded by the Classic’s approach to its visual, as well as sonic, presentation. But I think the marketing guys at Pro-Ject may want to re-think whether its own cork mat should be integral, or at least offered as a sweetened price add-on option to the overall package. Go hear it. It may just become tomorrow’s classic.