Amas adds the smarts to your streaming audio

THERE’S an exciting new product on the horizon that could revolutionise the way you interact with the entertainment system in your living room. Currently in development, Amas (Audivo Multiroom Audio Solution), from Germany’s Audiovi, is seeking crowdfunding and will go live on Indiegogo soon, but there’s plenty to get excited about. There are many variations to the system that will be offered to backers, but at its heart are two main components – the m:remote and the m:streamer.

As its name suggests, the m:remote is the control device, but this isn’t your everyday remote control unit. For starters, it is also a universal remote, so you can control your TV, Blu-ray player and everything else with a single handheld unit. That’s not all – as it forms part of a streaming system, the m:remote also features a small display that will show the cover art, song title and other information of the material currently being played! The icing on the cake is that it comes with a charging station so it’s always ready for you to use. 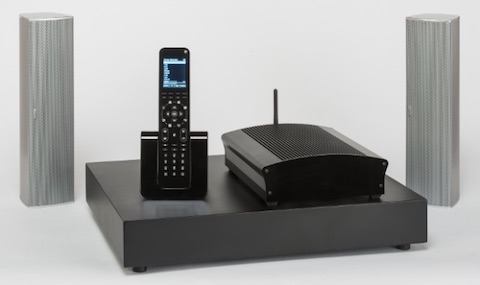 Which brings us to the m:streamer. With WiFi and Ethernet connectivity, it enables seamless access to the home network, enabling all manner of streaming services like Deezer and Tidal as well as thousands of other online radio and podcast sources. It also features analogue and digital inputs and outputs, allowing it to be used with existing components in the chain. It even supports HD audio up to 24-bit/192kHz and gapless playback for the best sonic experience!

There is much more the Amas Home can do – how much is dependant on the ancillaries you get. If two m:streamers are in use, this automatically becomes a multi-room system. Add in the Blue Aura WS80i wireless speakers and you’ve got a terrific-sounding stereo system that is a viable soundbar alternative. If you want to up the ante even further, throw in an integrated amplifier, Canton CD 150.2 speakers and a 100W subwoofer and you’ve got yourself the Amas Home Kitchen system! (By the way, it’s named as such as the manufacturer says you can have “the best sound in the kitchen” with this in place.)

Intrigued? Well, we definitely are, so keep an eye on its Indiegogo project page or surf over to its website for more details.