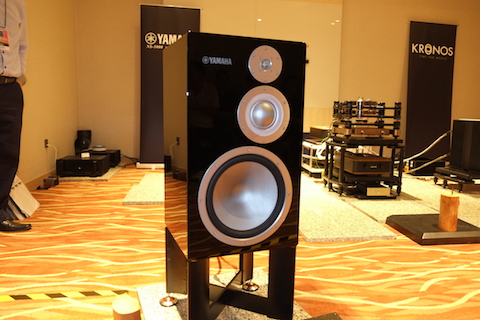 The KLIAV Show is an event local audiophiles and exhibitors look forward to every year, but I was (as I had been in previous years) in two minds whether I would be going. Judging from the word-of-mouth feedback, I had expected it would be a mundane affair. It also had the misfortune of happening at the same time as the Thai International High End show and many a manufacturer seems to have opted to send their representatives there instead.

In the end, I’m glad I dragged myself to the KLIAV Show this year. Against expectation, I enjoyed myself more than in previous recent shows. I had set myself two conditions for spending time in any given room: firstly, the exhibitor had to be playing music which “normal” people listen to, any funny bird sounds, prolonged drum solos, and the like and I would politely just head on out back the door. Secondly, I would neither ask, nor balk, at the prices of the gear on display, knowing my own brain has had a hard time adjusting to prices in 2017 ringgit, dollars or what have you.

These conditions obviously won’t make for too detailed a show report, but it’s not meant to be. It’s just a personal snapshot of rooms and items which I found interesting. I didn’t report on some because simply the snaps I took were too dark or poor quality (my bad on those). In no way does it mean there were no other worthy rooms than those sampled here. 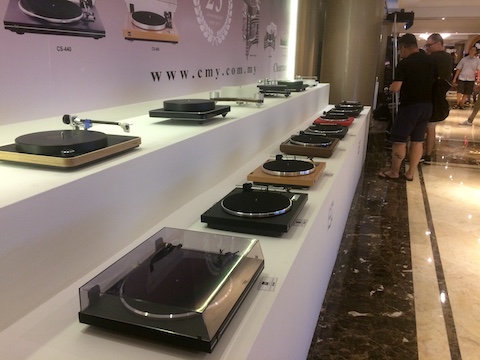 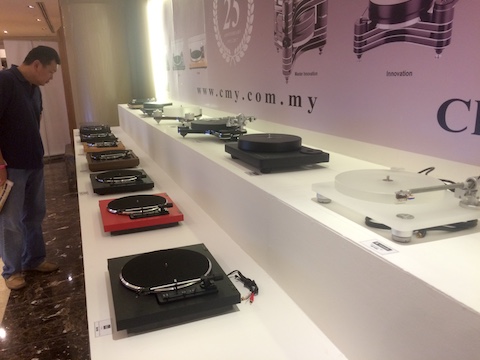 CMY Audio & Visual set up a pretty row of Dual and Clearaudio turntables. I used to own a Dual CS505-2 Deluxe and it was nostalgic to see that this model continues to be in the range, though perhaps not at the budget point this once “starter’ genuine high-end” turntable used to be. 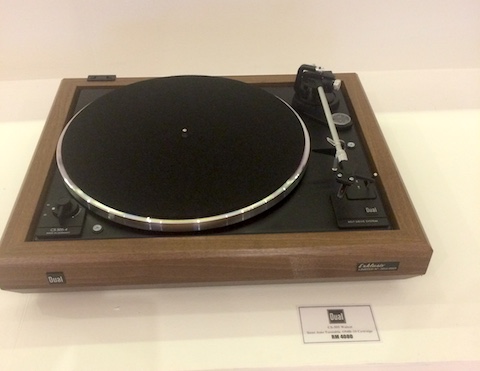 IsoAcoustics ran a very interesting demo of the effects of isolating one’s loudspeakers from a hard bare floor as opposed to spiking them as is conventional wisdom. The effects were very audible even in the hostile open environment the demo was done in. Their Gaia speaker feet (these have to be threaded into the bottom of the enclosure) are not cheap, but you could spend more elsewhere on your system (eg cables, power cord) and not get this level of noticeable difference. Whether you will like the effect, or if they would work best on carpeted floors remains to be seen, but this does look very worthwhile to investigate. 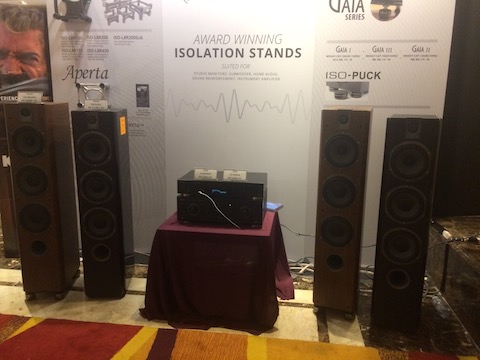 The Rega display was in an open plan section of the foyer, which hardly makes for good acoustics to show off gear to anywhere near its performance potential, but the little Rega RX-1 has a lot going for it, I reckon. Check them out if you need a small loudspeaker with good musical communication skills. I did not get to hear the Zu Audio floorstanders pictured next to them. 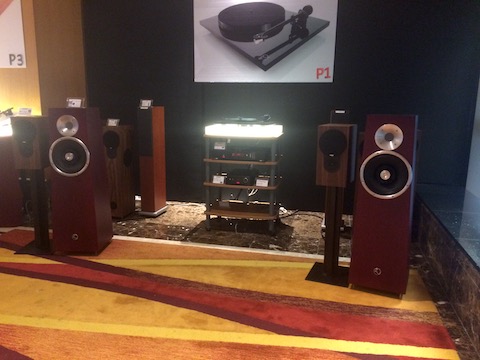 I’m sure not everyone will dig the aesthetics of the Devialet Phantom loudspeakers, but even in the less than ideal show environment, they put in a performance that did themselves proud. 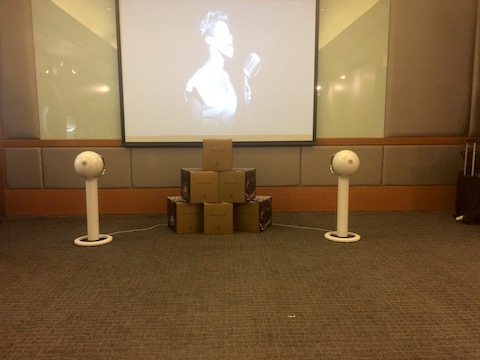 The guys from D&A Analogue had some goodies on display, and substantive discounts on the list prices of such wares for the vinyl junkie. So if you needed a new cartridge or some record cleaning fluid or a record brush, there were the Ortofon, Thorens and Pro-Ject Audio Systems offerings. 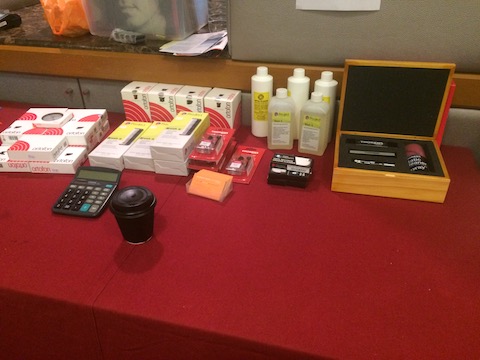 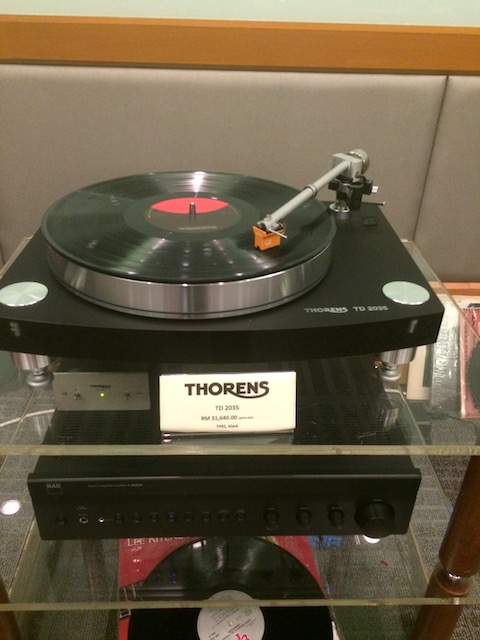 Ehhh?? Didn’t I just see this fella’s doppelganger in the Dual display line? 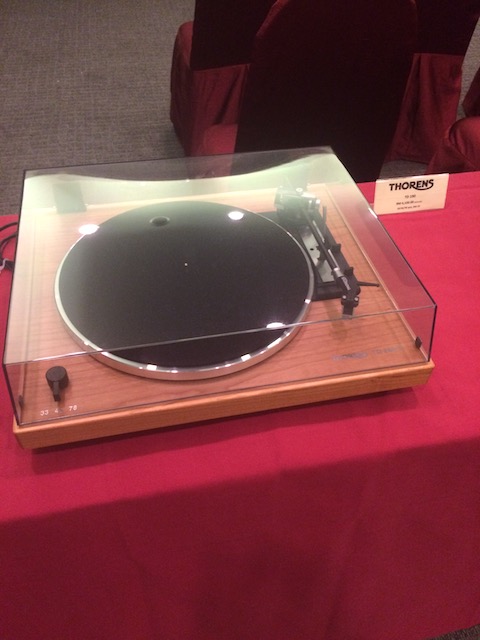 Still listen to CDs? If so, and you are lucky enough to be able to afford a seriously capable player, the likes of Metronome Technologie should be on your radar. The environment in which the systems they play through at the show may not be ideal, but the potential of these machines’ abilities sufficiently impress. 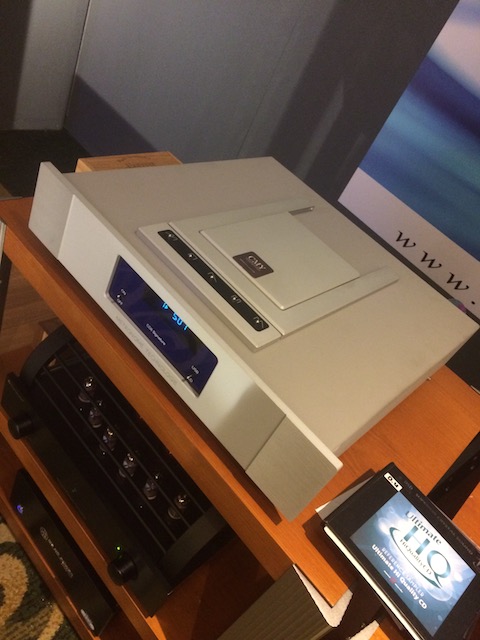 For the inveterate tweaker, uh, system optimiser, these little widgets will help you eke out a better performance from your components at not too hefty a price tag. 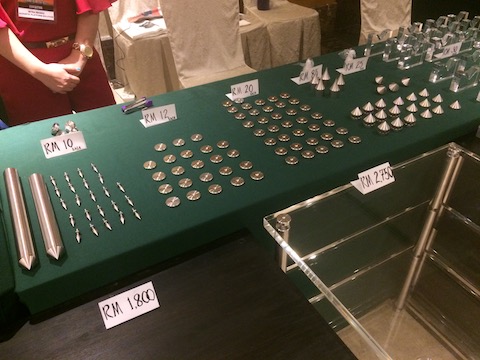 This is one of the show’s heavy hitters, with superb presence and resolution. The exhibitors obviously spent a lot of time to get the system sounding as impressive as it did. When valve and vinyl is done right, you hear the soul of the music. This system by Triangle Art played Sweet Baby James about as good as I could ask for without having a young, full-head-of-hair James Taylor in front of me. They did play that overplayed Lofgren track next (c’mon, you know which one), and, to my own surprise, I stayed in the room. 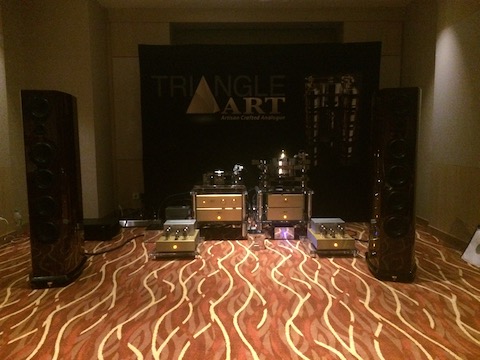 Kronos turntable, Absolare preamp and big (as in pick-a-fight with Naim Statement big) Mark Levinson amps, yet the star of this system, for me, was the Yamaha NS-5000s. Even fellow exhibitors/rivals who popped in to listen were suitably impressed and, in hushed tones, spoke highly of these Yammys. I’m no big fan of Roger Waters, but boy did his stuff sound great here! 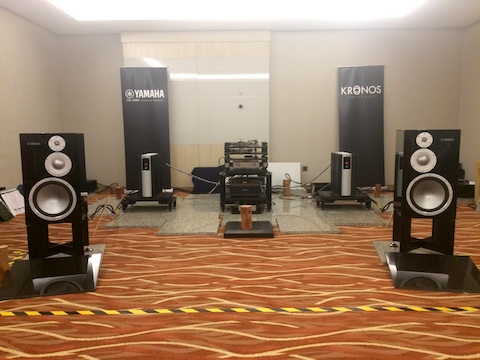 The Gryphon system on demo was displaying a real-estate style price tag (yes, others did so too), and it was not exactly to my tastes the way it sounded in this room, but hey, I’m game to sit and listen a bit when Bon Scott and the Young brothers strut their stuff. Comment to the effect of “Wow, sounds like the Iron Man music!” was heard from some youngsters who happened to mosey in. Nice to see some non-old farts taking an interest in this insanity we call a hobby. 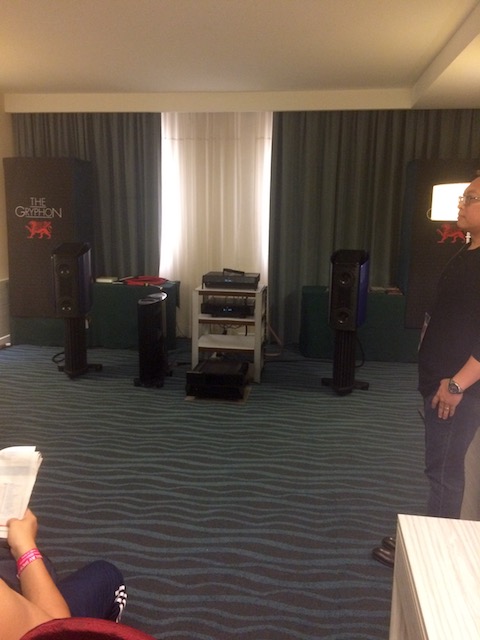 I have a soft spot for this system. A CD transport fronting the Micromega M-One streamer-amp with a pair of PenAudio speakers. Room correction was applied and it sounded fabulous even in the less than ideal environment. It even has a phono stage. What’s that? It is following the template of another French company? So you’d only ever watch Discovery’s Shark Week and never NatGeo Wild’s Shark Fest? It comes in a little cheaper than its Devialet rivals, and the amp is Class A-B so it has its own drum to march to, and there is quite enough room in the market for amps as capable as those from both these players. 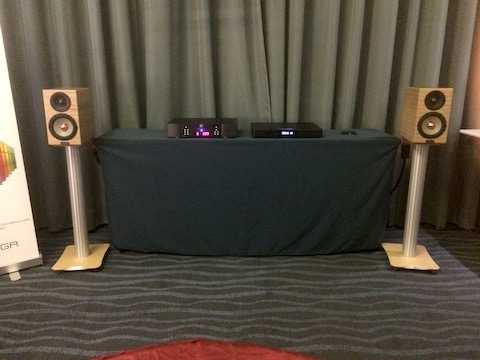 As far as turntables go, Tien Audio is not a household name, but this compact three motor mini-monster sounded rather nice with the Japanese Hana cartridge in its tonearm. Definitely worthy of further investigation. 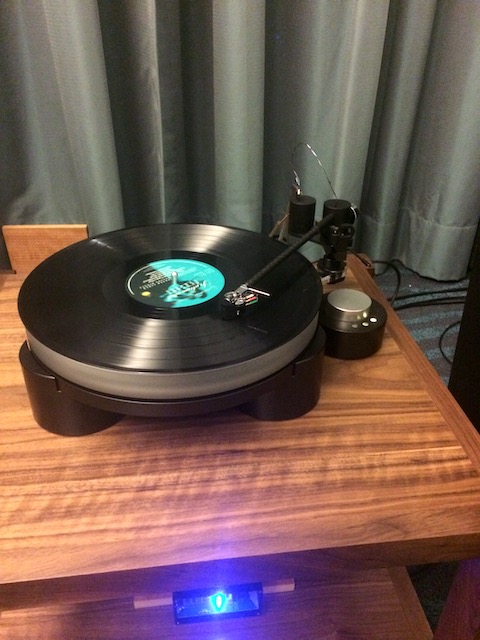 Speaking of three motors, this bunch know a thing or two (or three) about putting a three-motored spinner together, but for KLIAV 2017, a motor duet rather than a trio was doing the vinyl duties. I requested they play the new Vincent Belanger Pure Cello 45rpm LP but stocks had not arrived, so they obliged with the CD version – it sounded magnificent. In fact, I can’t think of ever having heard a bad sounding Audio Note demonstration of their gear. I am liking the idea more and more of having the speakers sit flush against the wall like their lovely Type Js here below. 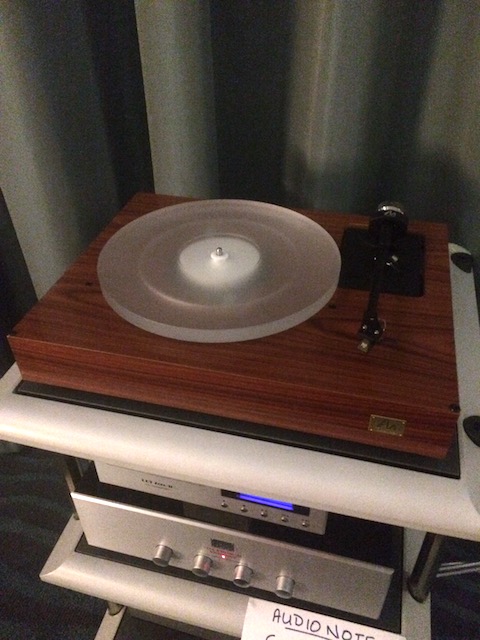 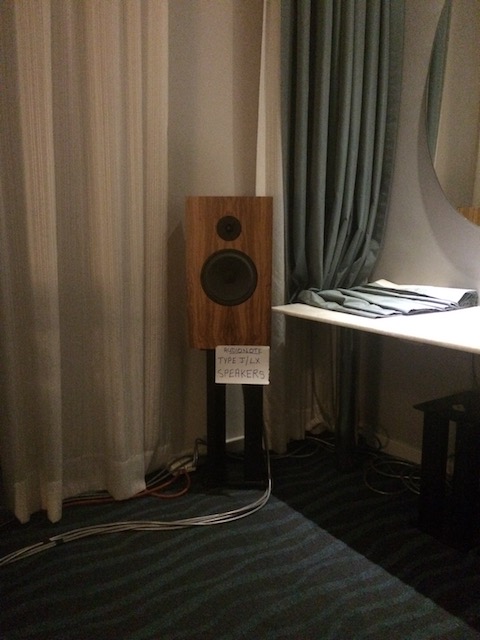 VPI in the Centre Circle Audio room had Accustic Arts (I think that’s how the Germans spell it) for company. As I arrived in the room around closing time, I only got to hear the CD player in action. Nice sounds indeed. 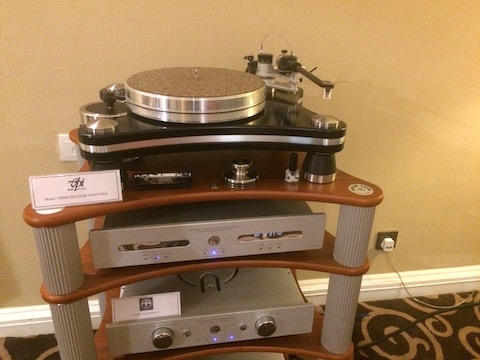 Big JBLs driven by moderately big Mark Levinson monoblocks. Even though the speakers were too large for the room, the results were relaxed and engaging with the amps and speakers in cruise mode. 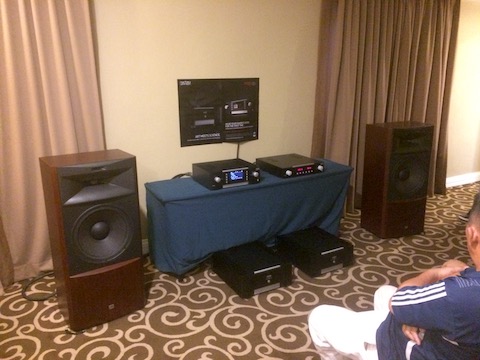 This simple Musical Fidelity and Dali set-up produced some nice sounds without being over the top. Nice to hear the M6Si again after having had one in for review some time back. 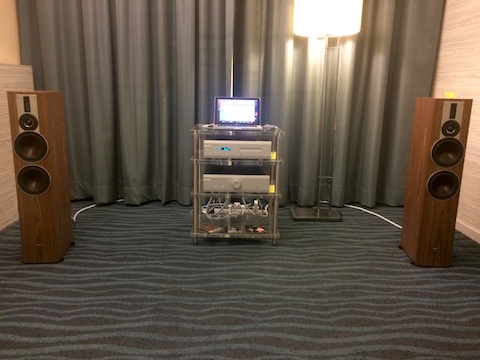 Making no attempt to be modest, these B&Ws sounded engaging at the end of Rotel pre and power amps with the iPhone to the left of the bottom rack providing the digits for the onboard DAC to turn back into music. 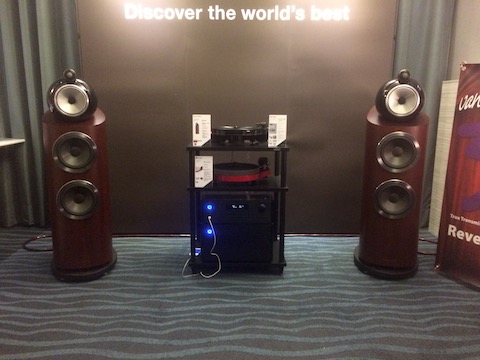 I didn’t quite get the names of the makers of these loudspeakers but I took a liking to these single driver babies, sounding groovy at the end of assembled Japanese Elekit kit amps. But I found the Telos tweaks a little to challenging to get into in this show environment. 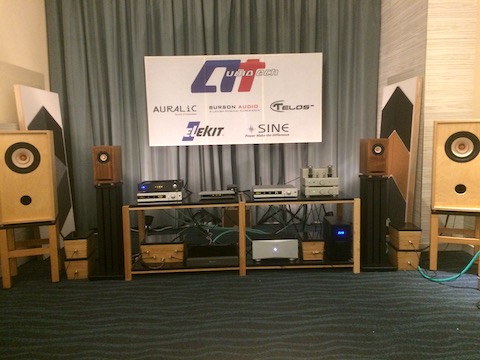 Boxes or cabinets are not what immediately comes to mind when someone mentions Quad loudspeakers, but Quad have a new range which utilises ribbon tweeters, which sounded sweet and engaging, smooth as a newborn’s tush at the end of some Cayin tube amps. Worth paying attention to if you can’t afford or make room for their large electrostatics. 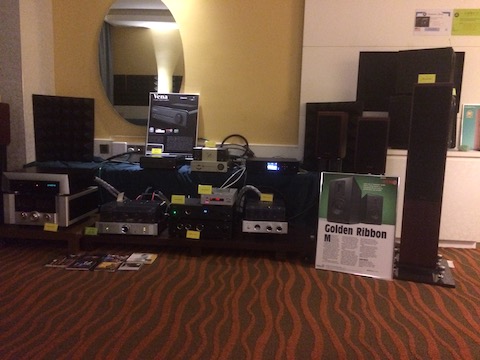 I was sufficiently impressed with the sounds in the Music Image room, which was chock-full of gear I was wholly unfamiliar with to stay until closing time. A Perpetuum Ebner PE 4040 turntable and an Ortofon tonearm was the platform for which DS Audio’s optical cartridge and dedicated phono amplifier produced some of the best vinyl sounds of the show. I was sufficiently tempted to ask the exhibitor what it would cost to purchase the show units (cartridge and phono stage). 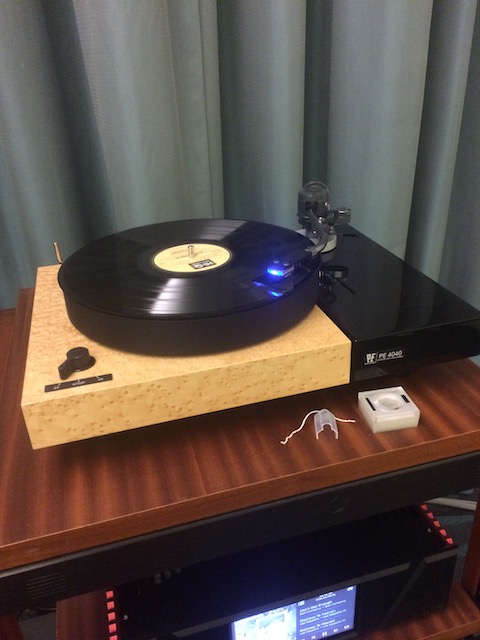 All in all, I thought the “new” venue had better sized rooms than the old to allow the exhibitors a better chance to produce reasonable results from their wares. I enjoyed myself.