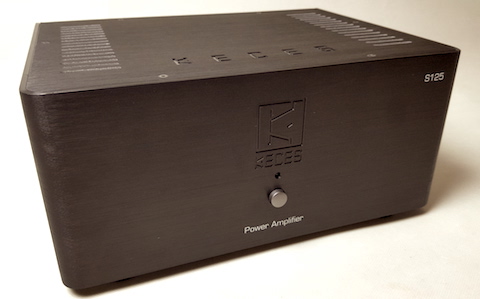 + Excellent bass, near-neutral sound that kicks harder than its rated power output of 125 watts.
– Could be a little more transparent, and could use a polarity switch.
Sound: 9/10
Value: 10/10

THE Keces Audio S125 is compact, measuring about 10 inches deep, a foot wide and six inches high, and weighing about 10kg. Clad in 4mm thick aluminium, this stereo power amp doles out tremendous power for its rated 125 watts per channel. It has RCA and balanced inputs and a pair of five-way speaker binding posts, all of which are gold-plated and of immaculate quality.

There are are toggle switches for RCA/balanced in, and single amp or bridged mode. The S125 comes wrapped in double-boxed cardboard and strong foam plastic on the inside, with a supplied with a power cord. Tuck it under your arm and off you go… 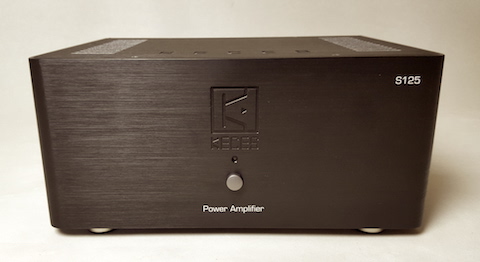 SETTING UP
I plonked it in place of my current power amp, a Bryston 6B SST, connected the speaker cables, RCA inputs and power cord (my own, I did not use the supplied one as I already knew the sound signature of my own power cord), turned on the amp and left it to burn in for about 10 days. It sounded very good right out of the box. Burn-in extended the bass, improved the soundstage height, width and depth, as well as extended the treble slightly. 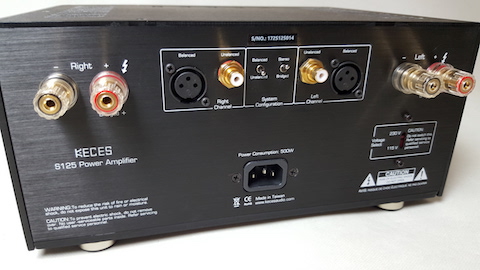 LISTENING
Listening was done in a room roughly 14 feet by 17 feet, with the Magneplanar MG1.7 speakers about eight feet in front of the listening chair. The S125 was the lowest priced component here; however, in no way did it embarrass itself in this company. And it drove the notoriously power-hungry Maggies with ease and grace. It produced full, deep, detailed and tuneful bass that gave the Bryston a bit of a run for its money.

Could it replicate the Bryston in my system driving the Maggies? No. But the Bryston is rated at 350W per channel. What the Keces could do with its rated output, however, was incredible. This may be the first review on the Internet of this amp driving a pair of 1.7s and the results were very satisfying.

At the tail end of my few weeks of listening to S125, I did manage to clip it and induce shut-down protection to kick in on one channel, but this was at a pretty insane volume of Queen’s Another One Bites The Dust… a volume that caused the infamous “mylar slap” thwack-thwack sound (the sound of the Mylar film of the speaker slapping against the back-metal frame; this happens when you drive Magneplanar speakers to some stupid high volume. Please don’t do this.). The amp resumed playing fine once it had cooled down and volume returned to sensible levels.

Listening to Tears for Fears’ The Seeds Of Love was very satisfying. This album has fantastic production, with incredible detail and layering of instruments and vocals. There is a lot going on here. Tracks like Woman In Chains, Bad Man’s Song and Sowing The Seeds Of Love contain a lot of emotion, the music swings and rocks and moves you to heights of joy, but only if your equipment does not induce harshness or over-exuberance in the treble, and if your power amp can keep up with the dynamic range. The S125 made listening to this a wonderful experience as it did have the clean power on tap to deliver. 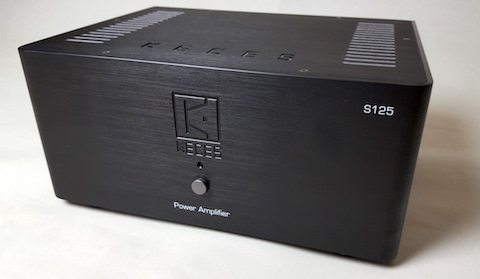 Siri’s Svale Band’s Necessary So album is deeply complex both in its musical phrasing and production, with different timing signature than most other music. There is plenty of detail, space, and textures within the recoding. All this as well as deep acoustic bass and natural human voice were delivered very well by the S125.

The magnificent bass delivery of the S125 has been mentioned. The mids and highs are equally of excellent quality. Height of imaging as well as soundstage width was stunningly good. Depth was reasonably good. The amp never sounded harsh, nor brash even when the volume was turned up. Some constrain and the hard quality of clipping was heard at ridiculously ear bleeding volume just before it shut down, presumably to protect itself as well as my hearing.

Although the S125 delivers a lot of detail, where it can do a little better, methinks, is in transparency. While it is certainly not veiled, and perhaps because it is in company here amongst components that will show up reduction of transparency as well as the nth degree of inner detail in the recording, this is the one area I felt stopped this amp from being the giant-killer that it almost is. While almost all the detail is there, the last little upper treble detail could be better. The err here is in omission, which is always kinder and preferred to the err of commission. It is, otherwise, extremely neutral almost without a sonic signature of its own. A truly remarkable piece of work for the asking money.

THE LAST WORD
I feel that time will show this amp to be a tweaker’s delight. This one is going to appeal to those handy with a soldering iron and a penchant for capacitor change. Swap the security of the warranty for an upgrade in one or two key components by a DIY expert, and you are going to have a class A product to give you years and years of beautiful music on your hands. Perhaps Keces Audio might even offer to do this for you in subsequent products?

For a company previously limiting its operations to building and selling power supplies, this first power amp offering by a new name in the hi-fi market deserves a standing ovation. Bravo!