Parasound JC 3 Jr. phono – all the flexibility you need

+ Even-handed and even-tempered phono stage; smooth and treads the line of detail and scale well with a well-structured soundstage; great musicality, rhythmic definition and timing; all the flexibility you need in terms of gain and loading for all but the most demanding MC cartridges; very quiet in operation and easy to set up.
– Some great competing phono stages can be had for less money, especially if your cartridges are not the most top flight. If your cartridge is super exotic and low output, you may also require a phono stage with more gain and even more flexible loading arrangements.
Sound: 9/10
Value: 8/10

PARASOUND has an almost legendary status in the industry and the company’s John Curl (hence JC) designed phono stages have a cult following amongst the vinyl cognoscenti. But they have never been what could have been described as affordable. With the JC 3 Jr., Parasound is shooting for its most affordable phono preamp yet in the Halo range – at US$1,500, it certainly isn’t stratospheric, but you are reminded that affordability is a relative term.

With the sterling reputation of its bigger brother, the JC 3+, this little guy has a lot to prove as issue of the genius mind of Curl. Does it really give you most of the JC 3+ for half the price? Read on to find out.

The unit is available in black or silver, and is housed in a full width, but only 1U chassis, but it is quite deep, so those with narrow shelving need to find another way to perch it. Lifting it out of the box, you are struck at how heavy it is for what is really a box of mostly fresh air – the internal layout is mostly space to minimise interference from the power supply to the delicate preamp sections. The build quality is certainly good to excellent, as is evidenced by the dense casework, but you could not describe it as usurious.

The JC 3+ is a truly dual-mono design, with dual power supplies and preamp sections housed in separate sub-chassis. The JC 3 Jr. does with a screen and separate single power supply (featuring a screened toroidal transformer), and dual-mono preamp circuitry laid out on a single high-quality PCB, hidden behind a metal screening bracket. Socketry is of very good quality with Neutrik XLRs and solid chassis-mounted phono connectors. The grounding post is a solid affair which can take all sizes of spades – but it is set a little far from the phono plugs, so be aware if your ground cable is captive to your tonearm cable.

SETTING UP
Set-up was straightforward: IEC mains in, hook up your tonearm cables to the input sockets and the ground wire (if any). Hook up your balanced or single-ended preamp inputs to the Parasound’s outputs.

Loading and gain adjustments are also super easy – one switch toggles fixed 47kOhm loading with a variable setting, which you set with a single potentiometer knob marked from 50 ohms to 550 ohms. Gain is set on another three-way switch for 40, 50 and 60dB (46, 56 and 66dB respectively at the balanced outputs).

With these settings, you can cater for almost all MC and MM cartridges. The only omission of real practical use is variable capacitance for MM cartridges. 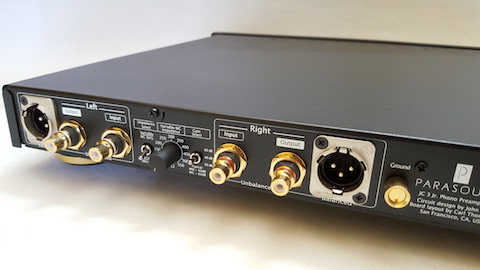 LISTENING
I tested this very flexible unit with a variety of cartridges and turntables, amplifiers and speakers to see how it would do in a number of different settings:

1. In my main turntable system – a heavily-modified Lenco L78 idler drive turntable in a custom plinth, mono pivot arm and Hana SL cartridge. This is my “daily driver” as it were. Amplification is an Arcam SR 250 driving Q Acoustics Concept 500 floorstanders. Loading was 400 0hms and gain 60dB. Compared versus my own ProJect PhonoBox RS with battery backed PSU.

2. In my second system – a Denon DP 80 direct drive turntable mounted with a Micro Seiki MA 505X tonearm, and Ortofon Quintet Red and ZYX Omega Premium cartridges. This fed a pair of KEF LS50 Wireless active speakers. For both cartridges, loading was 100 ohms and gain 60dB. Compared versus an ADL GT 40a phono amp/headphone amp/ADC/DAC unit.

3. In my third system – a Rega RP6 with RB303 tonearm and Rega Exact MM cartridge. Amplified by a Rega Brio (2017 model) into Falcon Acoustics LS3/5as and KEF LS 50 speakers. Loading was fixed at 47kOhm and 40dB of gain. Compared versus the onboard MM phono input on the Rega Brio as well as an EAR 834P MM phono preamp.

Let me illustrate with some pointed examples.

My daily listening phono preamp in my main system paired with my daily listening Hana SL cartridge – the PhonoBox RS with the outboard battery-backed power supply – has been my go to reference for vinyl playback. I know that it is not the ultimate by any means, but it is a known quantity to me and has a very neutral sound with falls slightly to the warm in the bass and midrange. That said, it is supremely quiet even at the highest gain settings and retrieves a lot of detail. The JC 3 Jr. goes toe-to-toe on all but the detail – the PhonoBox RS still resolves a shade more detail in the mid and highs and has a little more air, but the JC 3 Jr. brings what it retrieves across with a bit more fluidity and with more realistic decay.

On my reference tracks – The Dave Brubeck Quartet playing Take Five on a Classic Record 33rpm pressing – the timing of the JC 3 Jr. was peerless. It was fluid and fast without feeling frenetic. Instruments were painted with good tonal colour and Paul Desmond’s saxophone sounded reedy without being a caricature. Sound staging in the simple L/C/R arrangement was stable and enjoyable.

When listening to Macy Gray’s amazing binaural album recorded by Chesky, Stripped, spatial cues and depth were laid out realistically and with good solidity of her voice in context of accompanying instruments. The sonic signature of the recording venue was well presented as well, making her “unique” delivery very enjoyable. Depth of the soundstage is all you can ask for.

Switching to the second system, I compared it to a much more modest phono stage built into the ADL GT40a – no slouch itself, but no real comparison to the Parasound which has more of everything. Thus, I used this rig to compare how the Parasound would take a couple of different cartridges, starting with a modest entry level MC in the form of an Ortofon Quintet Red and ending with a ZYX Premium Omega.

Using the same tracks again as reference, the even-handed nature of the JC 3 Jr. is evident. What it showed, especially though the very revealing nature of the KEF LS50 Wireless, is how it scales its performance with the front end. It painted a very pleasant picture with the Ortofon, the quick and lean nature of the cartridge evident through the Parasound. You don’t feel you are missing much at all, it’s all very enjoyable. But when I switched to the ZYX, which retails for about 10 times the Quintet Red, the Parasound made clear where the extra money goes – the wider soundstage, the more finely-etched cymbal textures, the more nuanced tonal colour on instruments and more cohesive timing and rhythm.

In fact, I have never heard the ZYX in that way before – it has always been the cartridge I go to for detail and finesse, but with the Parasound, it had more body and soul than I have ever heard it. On that point alone, I was tempted to consider the purchase of the Parasound for my own use.

Finally, I switched tack to see how it would do as a MM phono stage in a more modest system – paired with a Rega RP6 with the stock Exact MM cartridge, and compared to the on board MM stage on a Rega Brio. Not surprisingly, it bests the onboard MM stage. What is surprising is not by as much as you might think for a phono preamp which is twice the cost of the integrated amp! There is some synergy to the way Rega designs its cartridges and its phono stages, I guess.

Listening to Blue Train by John Coltrane (mid-1990s European reissue), the vital line contact of the Exact extracts a lot of detail, but can come off as a little sibilant with trumpets and cymbal textures can be a little brittle. The JC 3 Jr. performs the admirable trick of allowing all that detail and texture to come through and paints it in a realistic manner – not harsh or sibilant, but in the right context of the music. Switching to a Japanese pressing of Rickie Lee Jones’s self-titled debut album, the JC 3 Jr. again allowed for a very enjoyable rendition. Rhythm and dynamics are well rendered and the mid-high forward balance of most Japanese reissues is welcome, not something to be feared.

Compared to my MM-only EAR 834P, the JC3 Jr is technically more proficient – tighter bass, quieter noise floor, more defined top end. To the EAR 384P’s credit, it has a bigger soundstage, more liquid midrange, warmer balance and a rhythmically more swinging sound. Mind you, the 834P lists for more than the JC 3 Jr. and does not support MC without opting for the internal step-up transformers.

Finally, I switched to a Dutch Mono Pressing of Ella and Louis Again Vol. 2 – a lovely reissue of the classic album. The mono switch on the JC 3 Jr. here is a great addition – without it on, the rendition was good, but once engaged, the central mono image sharpened up and gain solidity. Out of phase noise (vertical movement) was also attenuated nicely. But in addition to all this, there was a deepening of the mono “sound stage”, the layering of instruments in front and behind Ella and Louis. If you have a collection of mono LPs, this switch is worth its weight in gold.

As a MM phono stage, the Parasound acquits itself well, but its flexibility and capability begs for the very best MM cartridges with the view to moving to MC cartridges.

THE LAST WORD
So I lied a little when I said that I would answer the question if this is a Parasound JC 3+ on the cheap. I have not had the honour of listening to one of those exalted units, so I can’t compare. But I can say this – at its US list price, the Parasound JC3 Jr represents good value for money on its own merits, but I would qualify that it might make you want to upgrade your cartridge to get the most of it – and that might well be much more than $1,500.

Johan is a business consultant by profession but an electrical engineer at heart. He has been building and tinkering with hi-fi and audio equipment since his teens. Loves jazz, classical and classic rock.